The British government tried to cover its tracks. But a new cache of documents Robert Spencer and I have received in our battle to overturn our being banned from Britain reveal that a chief reason why we were banned from the country was because we strongly support Israel. As part of our lawsuit against the Queen of England and the Home Secretary et al, we have received numerous documents between the Foreign and Commonwealth Office, the Office of Security and Counterterrorism, and the Home Secretary. In one of them, an official in the Foreign & Commonwealth Office whose name was redacted wrote this letter on May 7 to a recipient whose name was also redacted:

I have received initial feedback from Post to say that they do not expect that there would be any reaction from the US Administration to these exclusions.

We do have concerns with some of the reasoning in the sub, particularly citing pro-Israeli views and. [sic] Pro-Israeli views (and also support for waterboarding) apply to a large number of Americans, including former Presidents. If, for instance, Geller and Spencer were to request details of their exclusion under FOI/DPA or other mechanism, that being pro-Israeli is cited as a reason may be problematic and they could argue publically that their exclusion is on the basis of their support for Israel.

I may get further advice from Post later tonight which I will send to you first thing in the morning. Meanwhile, we advise removing references to being pro-Israel from the main body of the sub as this is not grounds for exclusion. 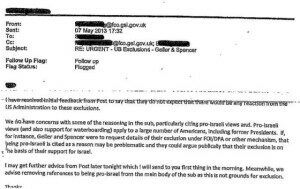 The “sub” is the “Subject Profile” – one was drawn up on each of us. There is no way to tell how much about our being pro-Israel was removed, but mine still says, “She strongly supports Israel and is an ardent Zionist.” And also: “Pamela Geller’s outspoken support for Israel may also attract pro-Palestinian groups to attend, further complicating the policing operation on the ground and making it harder to keep opposing groups apart.”

So now we know the real reason why we were banned.

The documents say that I “worked with” the English Defence League. No, I supported their campaign to stop Sharia in London and to oppose Islamic supremacism, while always being wary of some of the elements within the group. Two of their leaders spoke at one of our conferences — but “work together” is overstating matters. Anyway, EDL leader Tommy Robinson has now jumped ship and rushed to condemn his former friends and allies. I didn’t hurry to condemn him, but gave him ample opportunity to clarify his new position; unfortunately, it is clear now that he is a traitor and a liar. I understand that he faces jail time for tax-related crimes, but to throw the EDL in its entirety and every other brave counter-jihadist under the bus makes him the worst kind of turncoat.

The move to ban us, meanwhile, was a massive operation. This was not three guys sitting in a room saying, “I don’t like the way Geller looks and Spencer’s beard is annoying me.” At the first whisper of a rumor by some “hooligans” that Robert Spencer and I might be speaking at a freedom demo in the UK, numerous British government and law enforcement agencies sprang into action. Although Robert Spencer and I had not decided to go and speak in the UK until June, various government agencies began working to ban us as early as February.

There are numerous documents from the Office of Security and Counter-Terrorism (OSCT): that’s right, we were banned with the collusion of the office of counterterrorism. These are supposed to be legitimate government organizations and they are just tools of nefarious forces. How is the UK government preventing a terror attack on the UK, which is the objective of the OSCT? By banning counterterror activists. Why is the OSCT spending enormous sums of a bankrupt nation investigating “characters” who oppose terror, as they supposedly do? 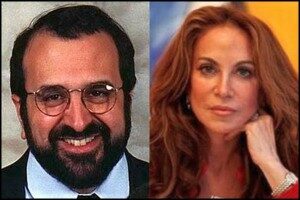 One of the other among a multitude of agencies investigating our case was a Casework and Operations Red Team for Special Cases. That’s right: the Home Secretary employed a Red Team on our case. Red Teams are designed to devise new strategies and approaches to deal with a threat. Now I ask you: is spending their time and money on human rights activists like Robert Spencer and me going to constitute a new strategy for effectively fighting the jihad terror threat against Britain? Is destroying the last bulwark, the last line of defense, the best way to proceed? What next? Is the Home Secretary going to strap on a bomb vest?

At one point, someone asks: “Can we start to draft the subs [subject profiles] on these characters?” They’re referring to us as “characters.” They know nothing about us and already they are smearing, defaming, and ridiculing us – despite Spencer’s scholarly books and decades of research, and our unstinting support for human rights for all people.

It is breathtaking – the amount of time, money, and human resources devoted to this Kafkaesque exercise. These venerable agencies begin their in-depth and comprehensive research at — wait for this — Wikipedia. From there, they cite to each other such notorious and reputable smear machines as Loonwatch and Islamophobia Today. Senior analysts from Asia, the Middle East and Europe were part of the research and information team. Our case had “very senior scrutiny,” as there was a “need to push” on this research. Mind you, much of the material in these documents were redacted. Wouldn’t the unredacted documents have made interesting reading?

All reference to the identities of those who asked that we be banned have been blacked out. Henry Ripley, writing “for the Treasury Solicitor,” explained to our lawyers that “the documents provided have been redacted to remove references to information which is not relevant to the claims.” No, clearly the documents were redacted to conceal who was behind the ban and what their motives were, and to conceal the conspiratorial nature of the exclusion.

But their black marker missed one reference, revealing that one of the groups complaining about us was Faith Matters. Faith Matters was founded by a Muslim named Fiyaz Mughal, who also heads up Tell Mama, a group dedicated to tracking “Islamophobia.” Tell Mama lost government funding in June after making false claims of waves of attacks “Islamophobic incidents.”

The Home Secretary assured Fiyaz Mughal, the discredited liar, that all decisions to exclude were based on sound evidence. How are the wild defamations of Loonwatch and Islamophobia Today sound evidence? In many of the documents they didn’t even spell our names correctly, or get our birthdates right. Is that sound evidence?

My “Subject Profile” says that I displayed “a picture of the Prophet Muhammad with a pigs face superimposed on it on her blog.” The Muhammad pig cartoon they are referring to is one that a Danish imam added to the infamous Muhammad cartoons printed by the Danish newspaper Jyllands Posten, in an attempt to gin up anger among Muslims against the Danes. The imam presented the Muhammad-as-pig cartoon as if it were one of the original Danish cartoons, which it wasn’t, and now the British government is presenting it as something I created, which isn’t true, either. The original Atlas post is here. The caption on the Muhammad-as-pig photo is: “Supposed to be Muhammad as half pig, but actually an altered photograph of a guy at a French pig-squealing contest.” So they take a photo that she showed was clearly marked as not Muhammad at all, and present it as if I were depicting Muhammad as a pig.

They had teams of people working, spending untold amounts of money researching us, and they couldn’t even get these basic facts right?

What’s more, what they accuse us of going to the UK for was never actually what we intended to do. They say we were going in order to participate in an EDL march. We never intended to do so. We only intended to lay a wreath at a memorial for British soldier Lee Rigby, who was murdered by Islamic jihadists on a London street.

It is amusing to read the back-and-forth when these geniuses begin to discover that we had no plans to come in February. They decide that “it doesn’t mean that they’ve [EDL] given up on the idea” of bringing us over, “and it would be a blow to their credibility if they did.” I find it interesting how badly they wanted to damage the EDL’s credibility. They were so bent on this that they had an informant within the EDL, from whom they say they were getting this information.

Through March and April they continued to pursue the elusive and non-existent engagement that Robert and I had never agreed to attend, spoken about attending, or even discussed attending among ourselves. This crack research team has one eureka moment when one of the redacted names “has discovered circa 120 articles written by Geller on one website alone[!] In order to go through this properly, we need another week to conduct our research.” More time. More money. More people.