It’s not exactly breaking news that only an infinitesimally small number of people in this country trust the mainstream media to report the truth, so it shouldn’t come as a great shock that the mainstream media is getting people all ginned up about James Comey’s announcement today regarding the “re-opening of the investigation” into Hillary Clinton’s private email server, or as the letter to Congress said, “taking appropriate investigative steps designed to allow investigators to review these emails to determine whether they contain classified information, as well as to assess their importance to our investigation.”

What does come as a bit of a shock, is how many people are buying into the hype. At this point in the election, hasn’t anyone learned that NOTHING is what it seems when first reported by the media? Anyone at all? “But… but… but… the media says that Comey’s announcement took everyone by surprise… even the President…”

Right… and I’ve got some oceanfront property in Arizona I’d like to sell you. Are you interested? Correct me if I’m wrong, but are we talking about the same media that less than 10% of Americans thinks is honest and trustworthy? Exactly! My fellow countrymen, especially my fellow Trump supporters, beware! Beware that we don’t all get lured into a perfect example of “rope a dope,” by the very same people and institutions we already know haven’t given us the honest truth about much of anything since long before this election season began.

In the video below, I review the facts that cannot be denied, and ask the question, “Why isn’t the media telling you this?”

The FBI has learned of more emails involving Hillary Clinton’s private email server while she headed the State Department, FBI Director James Comey told several members of Congress, telling them he is reopening the investigation.

“In connection with an unrelated case, the FBI has learned of the existence of email that appear to be pertinent”  to Clinton’s investigation, Comey wrote to the chairs of several relevant congressional committees, adding that he was briefed about the messages on Thursday. “I agree that the FBI should take appropriate investigative steps designed to allow investigators to review these emails to determine whether they contain classified information, as well as to assess their importance to our investigation.” 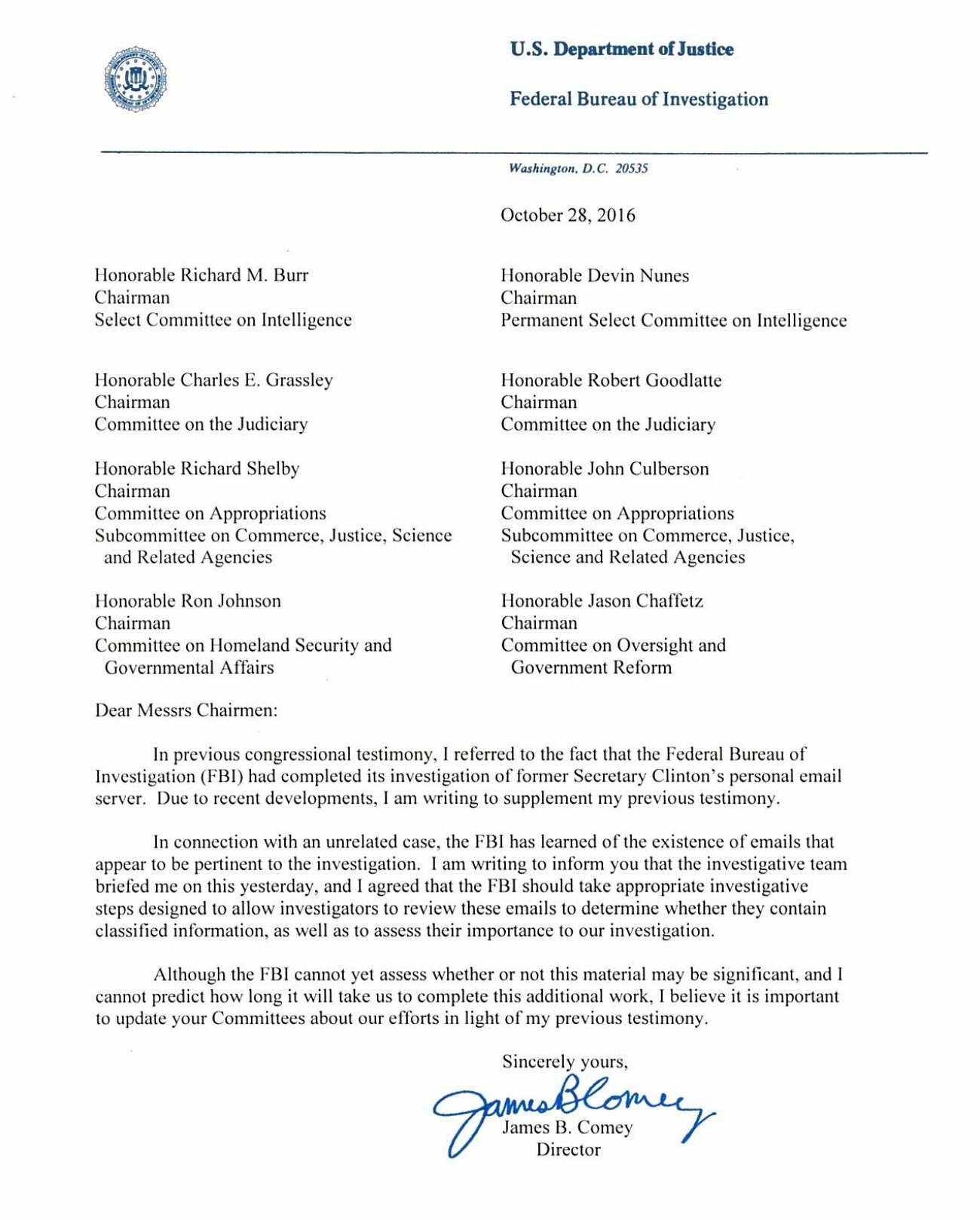 The FBI director cautioned, however, that the bureau has yet to assess the importance of the material, and that he doesn’t know how long that will take.

The Clinton campaign has yet to comment, but an aide told CNN: “We’re learning about this just like you all are.”

“Now that the FBI has reopened the matter, it must conduct the investigation with impartiality and thoroughness,” he said in a statement. “The American people deserve no less and no one should be above the law.”

Almost 15,000 new Clinton emails were discovered in September, but it’s unclear if the announced investigation relates to them or other correspondence. The newly discovered emails are not related to Wikileaks or the Clinton Foundation, law enforcement sources told CNN’s Evan Perez.

The messages were not found on the private email server in the Clintons’ New York residence, a government source told Reuters.

The emails were apparently discovered as part of the sexting probe into former Representative Anthony Weiner (D-New York), the New York Times reported. His electronic devices, as well as those belonging to his wife, senior Clinton aide Huma Abedin, were seized during that investigation.

House Speaker Paul Ryan (R-Wisconsin) renewed his call for Director of National Intelligence James Clapper to “suspend all classified briefings for Secretary Clinton until this matter is fully resolved.”

“Yet again, Hillary Clinton has nobody but herself to blame,” Ryan said in a statement. “This decision, long overdue, is the result of her reckless use of a private email server, and her refusal to be forthcoming with federal investigators.”

“That is superb. That is extraordinary news for the American people,” she told Yahoo News.“A great day in our campaign just got even better,” she tweeted. 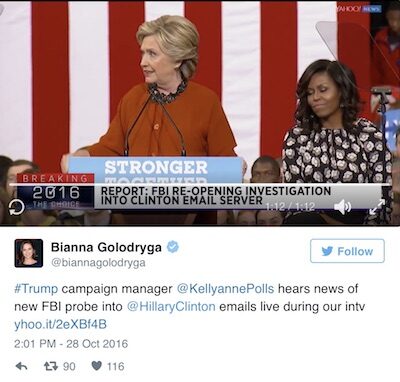 “They are reopening the case into her criminal and illegal conduct that threatens the security of the United States,” Trump said in Manchester, New Hampshire, 10 minutes after learning about the reopening of the case. “We must not let her take her criminal scheme into the Oval Office.”

“I have great respect for the fact that the FBI and the Department of Justice have the courage to right the horrible mistake that they made,” he said. “This was a grave miscarriage of justice that the American people fully understand, and it is everybody’s hope that it is about to be corrected.”

“With that being said, the rest of my speech is going to be so boring. Should I even make the speech?” he joked before turning to his prepared remarks.

The “FBI reopening investigation isn’t an October surprise, it’s an October nuclear explosion,”conservative political commentator Ben Shapiro wrote as part of a tweetstorm, adding that“Comey [is] trying to cover his a** 11 days before [the] election” and wondering if a “pre-emptive impeachment of a president elect” is possible because “the odds on President Tim Kaine just rose substantially.”

An ‘October Surprise‘ is a major event that happens in the month before the election that affects the outcome of the vote.

In response to the announcement, the Democratic Coalition Against Trump filed a complaint with the Department of Justice against Comey.

“It is absolutely absurd that FBI Director Comey would support Donald Trump like this with only 11 days to go before the election,” Scott Dworkin, senior advisor to the Democratic Coalition Against Trump, said in a statement. “It is an obvious attack from a lifelong Republican who used to serve in the Bush White House, just to undermine her campaign. Comey needs to focus on stopping terrorists and protecting America, not investigating our soon to be President-Elect Hillary Clinton.”

Article posted with permission from The Last Great Stand.

Another Year of Obama "Recovery"

Another Year of Obama "Recovery"