Due To Extreme Drought, The Number Of Cattle In The U.S. Is The Smallest It Has Been Since 1951

The last time the number of cattle in the United States was this low was 63 years ago. But back in 1951, there were only about 154 million people living in the United States. Now, there are more than 313 million people living in this nation. The size of the U.S. cattle herd has been shrinking for seven years in a row, and we are rapidly heading toward a beef shortage unlike anything that this country has ever experienced before. Of course the primary reason for this is the extreme drought which has been plaguing the western half of the country. As I noted recently, 2013 was the driest year that the state of California has ever experienced, and due to the lack of water ranchers across the western half of the nation have been selling off their cattle to be slaughtered. If you check out the U.S. Drought Monitor, you can see that almost the entire state of California is officially experiencing “D3 Extreme Drought” right now. If this drought does not end, we will eventually be facing a food crisis in the United States that is greater than any of us have ever seen in our entire lifetimes. 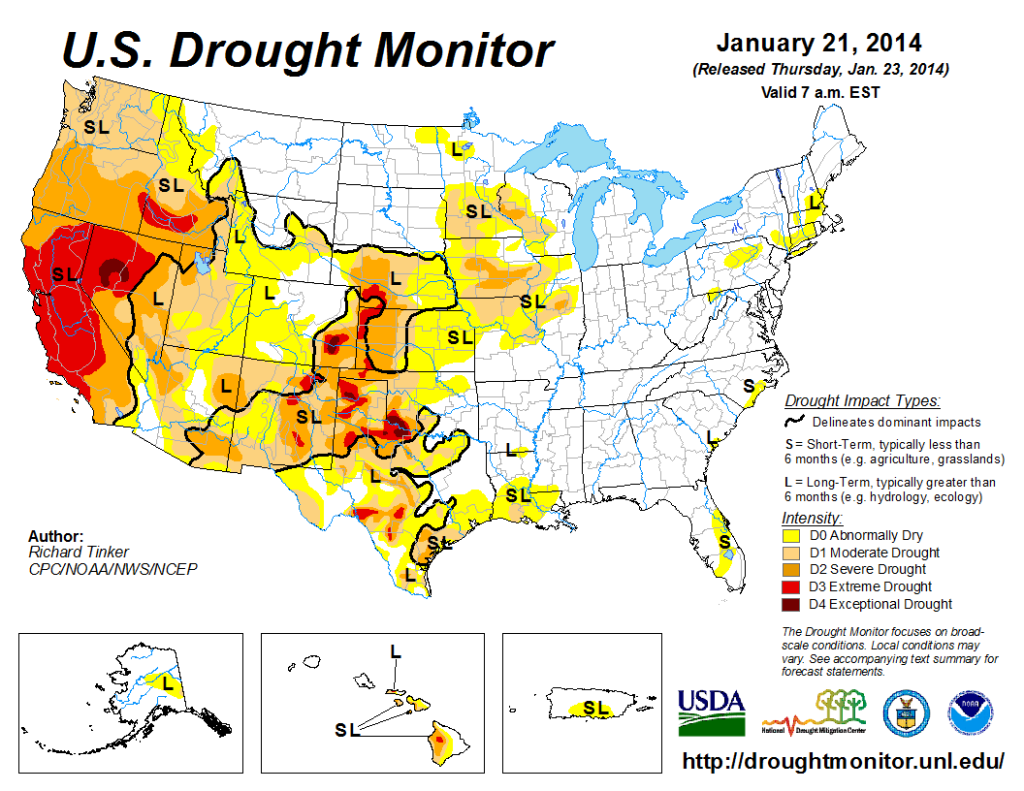 According to ABC News, the size of the U.S. cattle herd is already down to less than 88 million animals…

The National Agricultural Statistics Service reports that the U.S. inventory of cattle and calves totaled 87.7 million animals as of Jan. 1. That was down by about 1.6 million cattle, or 2 percent, compared with this time last year.

The agency says this is the lowest January inventory since 1951.

As I noted above, the number of cattle in this country has been shrinking for seven years in a row. If we still had the same number of people that we did back in 1951, this would not be too much of a problem. Unfortunately, the reality is that we now have more than twice as many people to feed.

And of course this drought is not just causing problem for ranchers. If rain does not start falling, there are rural communities all over California that will soon have no water to drink…

The punishing drought that has swept California is now threatening the state’s drinking water supply.

With no sign of rain, 17 rural communities providing water to 40,000 people are in danger of running out within 60 to 120 days. State officials said that the number was likely to rise in the months ahead after the State Water Project, the main municipal water distribution system, announced on Friday that it did not have enough water to supplement the dwindling supplies of local agencies that provide water to an additional 25 million people. It is first time the project has turned off its spigot in its 54-year history.

Are you starting to understand?

And according to that same article, a professor at the University of California, Berkeley believes that this is the worst drought in that area of the country in 500 years…

“We are on track for having the worst drought in 500 years,” said B. Lynn Ingram, a professor of earth and planetary sciences at the University of California, Berkeley.

Already the drought, technically in its third year, is forcing big shifts in behavior. Farmers in Nevada said they had given up on even planting, while ranchers in Northern California and New Mexico said they were being forced to sell off cattle as fields that should be four feet high with grass are a blanket of brown and stunted stalks.

But all droughts eventually end, right?

Most people assume that major droughts only last for a year or two and then things return to normal.

Unfortunately, that is not necessarily the case for the state of California. In fact, scientists have discovered that throughout history there have been many droughts that have lasted for more than 10 years in the state, and one extremely long drought that lasted for 240 years…

Through studies of tree rings, sediment and other natural evidence, researchers have documented multiple droughts in California that lasted 10 or 20 years in a row during the past 1,000 years — compared to the mere three-year duration of the current dry spell. The two most severe megadroughts make the Dust Bowl of the 1930s look tame: a 240-year-long drought that started in 850 and, 50 years after the conclusion of that one, another that stretched at least 180 years.

“We continue to run California as if the longest drought we are ever going to encounter is about seven years,” said Scott Stine, a professor of geography and environmental studies at Cal State East Bay. “We’re living in a dream world.”

In a worst case scenario, we could be looking at a drought in California that does not end during any of our lifetimes.

If this drought continues, food prices are going to go up, and not by just a little bit.

In fact, there are signs that this is already starting to happen. The following is an excerpt from a message that was recently posted on Steve Quayle’s website…

I became friends with the butcher at Save A Lot, when I can meat I will bring him and the Manager a can of what ever it is I made..today it was bean soup..Anyway, he came out to talk with me he was very concerned..he bought out his sheet of the meats he was getting and ALL of it has gone up in price, the beef items went up a dollar plus per pound. He told me that his boss said that if the hamburger goes up again they will not be able to offer it on their 5 packs of meat for 20 any longer.

You can read the rest of that post right here.

Perhaps you are thinking that you will just avoid meat for a while.

As for fruit, I get that 86 percent of lemons and a quarter of oranges come from there; its sunny climate makes it perfect for citrus, and lemons store relatively well. Ninety percent of avocados? Fine. But 84 percent of peaches, 88 percent of fresh strawberries, and 97 percent of fresh plums?

Come on. Surely the other 49 states can do better.

If this drought does not end, it is eventually going to result in a nationwide food crisis.

Sadly, most Americans are totally oblivious to all of this because the mainstream media keeps telling them that everything is going to be just fine.

Just check out the following video of news anchors all over the country mindlessly saying “don’t worry, be happy“…

Get my new book about the future of America: The Beginning of the End.

Russia And China Stand In Agreement On Ukraine – Is That Bad News For The United States?

QE4 In The Works – Americans Worried About Inflation

QE4 In The Works - Americans Worried About Inflation