The Wikileaks emails continue to be a treasure trove of Clinton Foundation corruption, and that includes daughter Chelsea.

In this latest revelation dated January 4, 2012, former top Bill Clinton aide and Clinton Foundation board member Doug Band warns Podesta, “Once we go down this road” in regard to Chelsea looking a little too deeply into the goings on at the foundation, after admitting a few bombshells about where the money really goes.

Apparently the 501c3 was used not only to pay for Chelsea’s lavish $3 million wedding, but also for her “life for a decade,” and that’s in addition to Chelsea skirting taxes on money from Bill and Hillary: 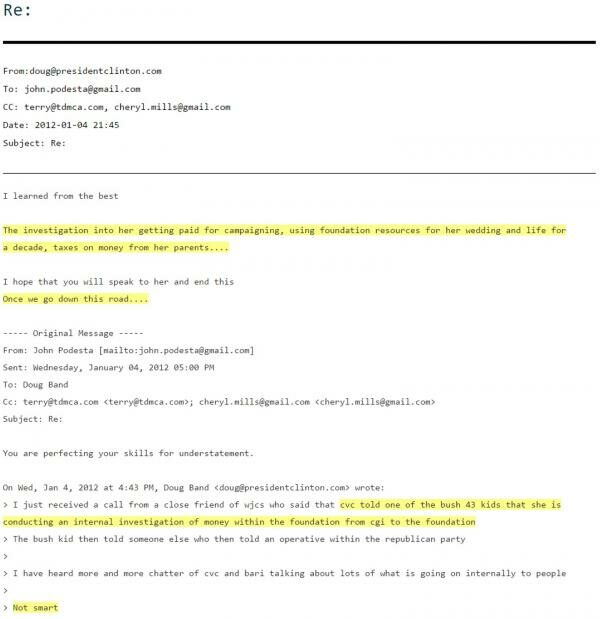 The investigation into her getting paid for campaigning, using foundation resources for her wedding and life for a decade, taxes on money from her parents….

I hope that you will speak to her and end this

Once we go down this road….

While it is unclear how much of Chelsea’s estimated $3 million wedding to Marc Mezvinsky was paid for out of Clinton Foundation coffers, just the rest of the sentence in the email itself makes it highly likely that it was most if not all of it, considering Band also snidely points out that the foundation paid for Chelsea’s “life for a decade.”

This is the same foundation after all that has been used to launder money from foreign governments for US State Department “favors” courtesy of then Secretary of State Hillary while superficially giving deadly, watered down HIV drugs to poverty-stricken African people — likely killing them faster, just by the way — and calling it “charity.”

In short, the foundation is obviously used as the Clintons’ personal checking account. Like so many other things these people have gotten away with, if others did things like this, they would have been tossed in prison a long time ago.

Band apparently left the board of the Clinton Foundation back in 2015 just a few months into Hillary’s campaign. Gee. Can’t imagine why.

What else could possibly come out of these leaks? How much more corruption is there? Just about everything has been covered by the Clintons at this point. There’s nowhere else to go here but down into some real nightmare fuel.

Amazing. And these people are going to run the White House for another four or even possibly eight years?

What a waking nightmare.

Article reposted with permission from The Daily Sheeple