Even With all the Victimization of Sodomites, their Disease Rates are Highest Since 80s HIV/AIDS Outbreak

As David Kupelian explained in his book The Marketing of Evil: How Radicals, Elitists, and Pseudo-Experts Sell Us Corruption Disguised As Freedom, the sodomite community sought to portray itself as victims when the HIV/AIDS (formerly known as GRIDS, Gay Related Immune Deficiency Syndrome) broke out in the 1980s. They even marketed themselves as “gay” instead of sodomites, queers or homosexuals. The marketing seems to have worked, but it hasn’t stopped their depravity and it has only led to sodomite men’s disease rates being the highest since that time.

In a Center for Disease Control fact sheet that was put out in November 2015 with studies from 2014, which outlined the national data for sexually transmitted diseases (STDs) in America, it was “particularly gay and bisexual men” who are at greatest risk for syphilis as rates of syphilis are increasing at an alarming rate.

“We’re concerned about our high levels of syphilis among men who have sex with men – really we’re back to the level of disease – burden of disease – in gay men that we were seeing before HIV in this country,” said Gail Bolan, director of the CDC’s Division of STD Prevention.

According to the fact sheet, “Trend data show rates of syphilis are increasing at an alarming rate (15.1 percent in 2014). While rates have increased among both men and women, men account for more than 90 percent of all primary and secondary syphilis cases. Men who have sex with men (MSM)* account for 83 percent of male cases where the sex of the sex partner is known. Primary and secondary syphilis are the most infectious stages of the disease, and if not adequately treated, can lead to long-term infection which can cause visual impairment and stroke. Syphilis infection can also place a person at increased risk for acquiring or transmitting HIV infection. Available surveillance data indicate that an average of half of MSM who have syphilis are also infected with HIV.” 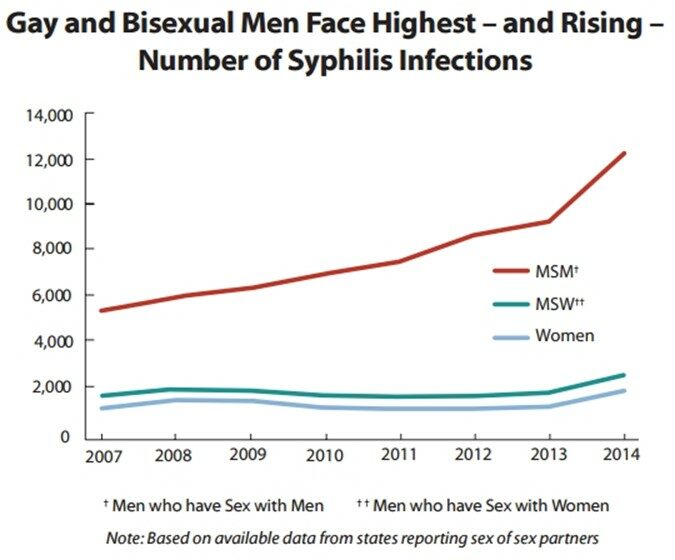 I’m glad they brought that out. While there may be men who have immoral desires for other men, some actually engage in the “behavior.” That is key here as we go forward. The sodomite lifestyle is a behavior born of a reprobate mind (Rom. 1:18ff).

“Having more sex partners compared to other men means gay and bisexual men have more opportunities to have sex with someone who can transmit HIV or another STD,” according to the CDC.

The CDC went on to report, “A number of individual risk behaviors (such as higher numbers of lifetime sex partners), as well as environmental, social and cultural factors (such as higher prevalence of STDs or difficulty accessing quality health care) contribute to disparities in the sexual health of gay and bisexual men. For example, gay and bisexual men with lower economic status may have trouble accessing and affording quality healthcare, making it difficult to receive STD testing and other prevention services. Additionally, complex issues like homophobia and stigma can also make it difficult for gay and bisexual men to find culturally-sensitive and appropriate care and treatment.”

The issue is not health care. The issue is behavior. If one curbs behavior, one does not engage in sodomy. Therefore, where syphilis and other STDs, including those who engage members of the opposite sex in promiscuous sex outside of marriage, would not be on the rise.

In 2013, a survey was released by the National Health Interview Survey, an arm of the Centers for Disease Control and Prevention, pointed out some other behaviors that sodomites are prone to engage in over heterosexuals:

Additionally heterosexual women were more likely to consider themselves in either excellent or very good health compared to those that claimed they were lesbian.

God was clear when he said through the apostle Paul, “For this reason God gave them up to vile passions. For even their women exchanged the natural use for what is against nature. Likewise also the men, leaving the natural use of the woman, burned in their lust for one another, men with men committing what is shameful, and receiving in themselves the penalty of their error which was due.” (Emphasis mine)

Sodomites need to consider why they are suffering under such diseases. It isn’t just a “natural thing.” It is the consequences of them failing to honor God as God and thus, He has turned them over to such depravity, and no amount of victimizing these people will solve the problem. It’s only made it worse. The only answer is true repentance and faith in Jesus Christ.

Oh, the Horror! The Duggars Actually SPANK Their Children!