The woman involved in the San Bernardino attack that killed 14 people gave the Bay’at, that is she pledged allegiance to the leader of the Islamic State Abu Bakr Al-Baghdadi. The clearest indication yet that this was an act of ISIS terrorism, according to two law enforcement officials. In addition, yesterday, the FBI confirmed  that her husband: “Syed Rizwan Farook — who along with his wife, Tashfeen Malik, carried out the San Bernardino shooting massacre — apparently were radicalized and in touch with people being investigated by the FBI for international terrorism, law enforcement officials said Thursday.”

To understand what Bay’at is (click here). It is where the terrorists repeat aloud: “We give bay’ah (allegiance) to the Caliph of the Muslims, the Prince of the Faithful, to hear and submit …”. They say loudly while they raise their index finger in declaring that God is a singular God, and by that they denounce the Trinity, an aspect of Antichrist (1 John 2:22) and give their loyalty to participate in Jihad.

So day by day, we are getting more confirmation to what we assessed yesterday this is ISIS international terrorism, sophisticated and well planed in advance from help abroad. The officials said Tashfeen Malik, 27 (the supposed Pakistani wife) made the statement on a Facebook page.

And just as we assessed, these ISIS lone wolves always attempt to cover their tracks. The two attackers sought to cover their tracks by damaging some personal electronic devices, a senior U.S. law enforcement official said Friday as investigators struggled to learn what prompted the rampage that claimed at least 14 lives.

It was obvious before and is now very clear, this is no workplace violence. Yet the White House as well as the media put such an assumption as the highest priority. This assumption of ‘work place violence’ is what the U.S. government was looking for to chisel on the second amendment. It was rather obvious that the two gunmen amassed an arsenal of explosives and ammunition, suggesting the possibility of further violence.

CBS News has obtained images of explosive devices found at a Southern California social services center and the home of Syed Rizwan Farook, 28, and his wife, Tashfeen Malik, 27.

Below is a photograph of the explosive device found at the facility where the holiday party was held. It is a cell phone photograph taken of the screen of the robot used by bomb squad to evaluate the explosive device. The photo shows a yellow toy car with a remote device intended to be the ignition source and three pipes connected to it and wires. 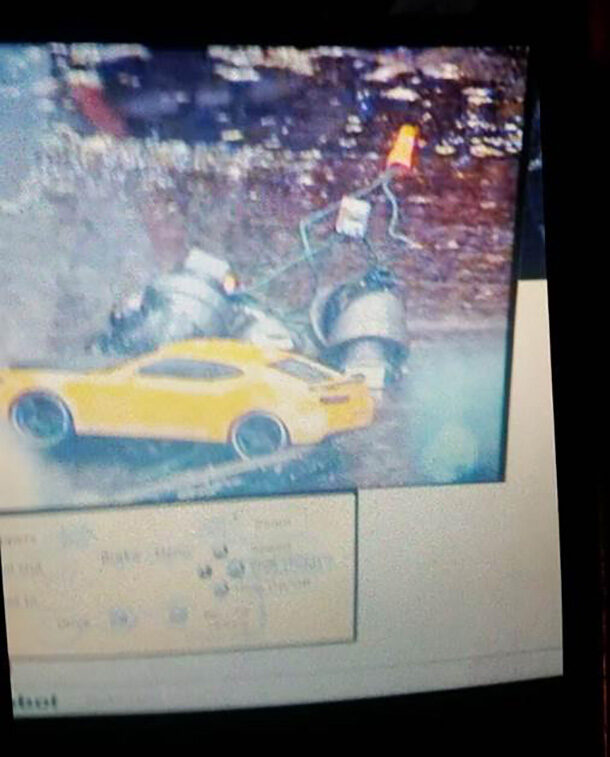 Cell phone photograph taken of the screen of the robot used by bomb squad to evaluate the explosive device. The photo shows a yellow toy car with a remote device intended to be the ignition source and three pipes connected to it and wires.  CBS NEWS

A second photograph, below, shows pipe bombs in a duffel type bag found at suspects’ residence. 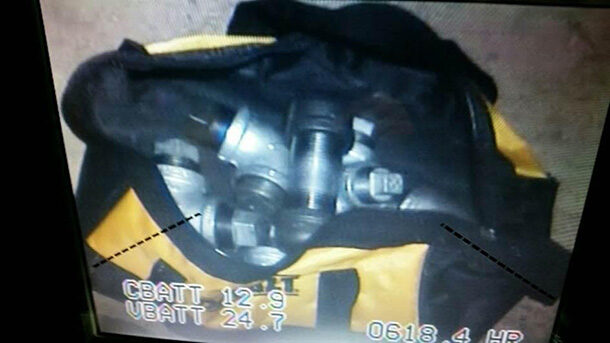 Law enforcement sources tell CBS News senior investigative producer Pat Milton the suspects’ explosive devices are nearly a carbon copy of bomb constructing instructions provided for in one of the very first issues of al Qaeda’s online magazine, INSPIRE, entitled “How To Build A Bomb In the Kitchen of Your Mom.”

But use of such a manual is not confirmed and they could have easily obtained training from other sources.  Over a year ago, Shoebat.com explained in detail how the FBI were not cracking down on Youtube allowing terror networks to download training videos showing lone wolves how to construct explosives (see here).  Any ISIS lone wolf can find detailed instructions on a step-by-step manuals in English and in Arabic where homegrown terrorists can feast their eyes on an assortment of websites that give detailed instructions on how to make TATP and even C4. That including mechanisms, detonators, igniters …rockets rocket launchers … the works. None of these have been closed by homeland security.

At their home, they had 12 pipe bombs, tools for making more such explosives, and over 3,000 more rounds of ammunition, Police Chief Jarrod Burguan said.

One could imagine the lives, the costs and the complexity of such operations that would drain the system, especially how difficult it would be to stop this menace.

Muslim terrorists have the ability to “go dark”. U.S. intelligence agencies are finding it increasingly difficult to track communication among the terrorist organization’s members. Many officials have blamed the group’s adoption of sophisticated encryption software, such as the web browser Tor or the messaging app Telegram, for the inability to identify potential threats. Security now has a tougher job, to avoid being monitored, they’ve shifted to encrypted chatting platforms becoming increasingly careful to secure their communications. A member’s ability to encrypt is an important factor in how the organization values him or her as an operative. As a result, members are learning different tools faster, creating a much bigger problem for intelligence agencies trying to track their communications. Then you have group chats on Telegram that are specifically dedicated to propaganda can have up to 16,000 members, and are growing by the thousands every day.

We have explained before these revelations how this has all the hallmark of an ISIS terror ring and also why it was impossible to detect which will cross the eyes of any seasoned F.B.I agent. We explained all this to police officials On November 13, just prior to the Paris and San Bernardino massacres to no avail as you can see, the District Attorney of New Jersey cancelled all training by “Islamophobes” like myself.

As we learned from you: you can take the horse to the water, but you can’t make him drink.

Until the next massacre, Merry Christmas.

Here He Goes Again: Obama Says It’s “Insane” For Millions of Americans On Watchlists To Own Guns

Here He Goes Again: Obama Says It’s “Insane” For Millions of Americans On Watchlists To Own Guns