Judicial Watch announced today that it “obtained more than 100 pages of previously classified “Secret” documents from the Department of Defense (DOD)and the Department of State, revealing that DOD almost immediately reported that the attack on the U.S. Consulate in Benghazi was committed by the al Qaeda and Muslim Brotherhood-linked “Brigades of the Captive Omar Abdul Rahman” (BCOAR), and had been planned at least 10 days in advance.”

Judicial Watch added what has been proven and obvious for years—that “Benghazi attack” was “not about a response to an anti-Muhammad video” or was it “the protests at the U.S. Embassy in Cairo” and that A Defense Department document dated September 12, 2012, the day after the Benghazi attack, details that the attack on “the compound had been carefully planned by the BOCAR terrorist group” “to kill as many Americans as possible.”

While Judicial Watch did a fantastic job in proving that this document was sent to “then-Secretary of State Hillary Clinton, then-Defense Secretary Leon Panetta, the Joint Chiefs of Staff and the Obama White House National Security Council,” but what the Defense Department revealed was nothing new.

The heavily redacted Defense Department “information report” says that the attack on the Benghazi facility “was planned and executed by The Brigades of the Captive Omar Abdul Rahman (BCOAR).” 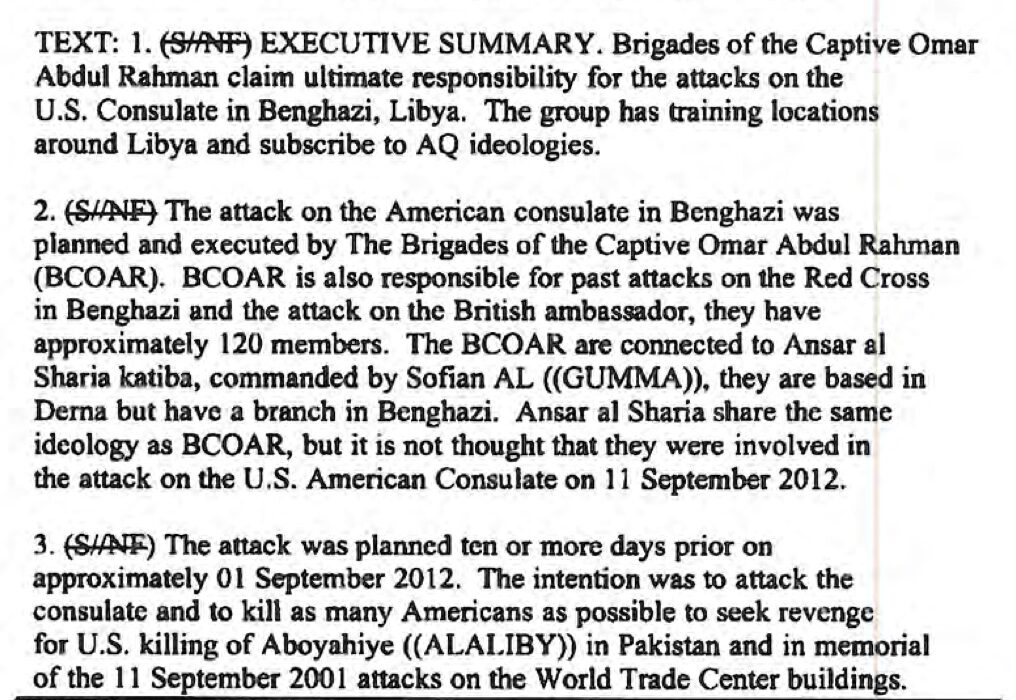 The evidence for all this was already released, by Shoebat.com (while doubted by idiots) in 2012, which was researched with assistance from Libyan intelligence sources from which Shoebat.com not only obtained this confirmation but also sent findings to the National Center For Intelligence and Counter-Terrorism, a ‘huff-and-puff’ agency Shoebat.com dealt with, and to be frank, were unfit of being street sweepers.

This agency threw the valuable intelligence sources from Libya under the bus, an intelligence that not only helped resolve details about Benghazi, but would pin-point terrorist weapons cache with latitude and longitude accuracy. This was a team of x-Qaddafi intelligence who desired nothing more than to reverse U.S. policy in Libya and exposed the very assassins of Americans during the Benghazi affair. These were the true heroes and not these ‘street-sweepers.’

The Department of Defense agency’s information was lacking that the Muslim Brotherhood’s involvement stems from the top. Mohammad Morsi’s involvement in his defense for the blind Sheikh and his Egyptian Ansar Al-Sharia’s branch involvement with Ansar Al-Sharia in Libya, the very element that attacked the U.S. in Bebghazi which later became ISIS itself.

The countless documents and evidence Shoebat.com provided on this issue was immense and took years to compile. There should be no doubt now regarding the year’s worth: 450 reports on Benghazi affair alone.

And just for one little example out of thousands, Shoebat.com reported in detailed evidence on how the Salafists and the Muslim Brotherhood under Morsi planned the attack on U.S. embassies prior to 9/11/2012.

This is an agency (the Defense Department) who did not reveal everything and does not know how to spell such names as Al-Libi, whom we reported on (which they spell Alaliby), Sufian Gammu (which they spell GUMMA), or Abdul Baset Azzouz (which they spell AZUZ). All this hush-hush in both media and government, which we exposed long ago with detailed evidence, and it takes a court order to confirm this joke:

What can be obtained from newspapers on the streets of the Middle East was not as “classified,” information we provided with immense detail including better classified documents from Middle Eastern sources.

The American reader would read: “A violent radical,” the DIA report says, is “the leader of BCOAR is Abdul Baset ((AZUZ)), AZUZ was sent by ((ZAWARI)) to set up Al Qaeda (AQ) bases in Libya.”

Did we just now need a confirmation that “member of the Muslim brotherhood movement…where they have large caches of weapons …” and was involved in Benghazi?

Shoebat.com working with x-intelligence officers had reported on Abdul Baset Azzouz (AZUZ) back in 2012: “Known for his vicious and cunning abilities, he was the first adviser to Ayman Al-Zawahiri and became the leader of Al-Qaeda in Darnah, Libya. He can be seen in this video, giving his testimony from Libya (wearing yellow). Azzouz can even be seen recruiting entire communities in Libya to join the jihadists.”

In our Libyan Leaks: More Secret Documents Reveal Obama’s Failure In Libya, “Sufyan Gammu of Ansar Al-Sharia in Darnah (white cap and long beard) is one of the most wanted men from Al-Qaeda. He used to be the special driver for Usama Bin Laden and is now roaming free in Libya, protected by the government.”

Shoebat.com detailed research in 2013, investigated Benghazi and determined that the Muslim Brotherhood and Ansar Al-Sharia with branches in Libya and in Egypt were the main hand in the attack.

From as far back as July 27, 2012, even before the Benghazi attack itself, other Americans warned about the threats of the Blind Sheikh’s son that appeared in the Egypt Independent:

The son of Omar Abdel Rahman, a Jama’a al-Islamiya leader known as the “Blind Sheikh” who was convicted of terrorism charges in the US in 1995, threatened to organize a protest at the US Embassy in Cairo and detain the employees inside.

Abdel Rahman demanded that President Mohamed Morsy intervene for the release of his father as he did in the case of Egyptian journalist Shaimaa Adel who was detained for nearly two weeks for covering protests in Sudan then flown back to Egypt on a plane with Morsy.

In fact, the Blind Sheikh’s son was threatening to kidnap Americans from the U.S. embassy in Cairo to exchange for his father and was calling on Morsi to get involved. Shoebat.com provided EXHIBIT A and EXHIBIT B with video, shot in real time during the attack in which gunmen can be heard shouting, that they were sent by Morsi, the very terrorist whom now the State Department is in bed with is also the very terrorists, it now defends. Some even attempted to refute our findings but failed, not knowing how to spell a word of Arabic.

The other is a document that implicates Ansar al-Sharia Egypt, which clearly had representatives outside the U.S. Embassy in Cairo on 9/11/12. Another Egypt Independent article, dated April 10, 2012, is being submitted as EXHIBIT Z2.

So now, and thanks to Judicial Watch, we all know that:

Another DIA report, written in August 2012, said that the opposition in Syria was driven by al Qaeda and other extremist Muslim groups: “the Salafist, the Muslim Brotherhood, and AQI [Al-Qaeda in Iraq] are the major forces driving the insurgency in Syria.”

Judicial Watch concluded: The growing sectarian direction of the war was predicted to have dire consequences for Iraq, which included the “grave danger” of the rise of ISIS.

Some of the “dire consequences” are blacked out but the DIA presciently warned one such consequence would be the “renewing facilitation of terrorist elements from all over the Arab world entering into Iraqi Arena.”

“…why would the Obama administration continue to support the Muslim Brotherhood even after it knew it was tied to the Benghazi terrorist attack and to al Qaeda? These documents also point to connection between the collapse in Libya and the ISIS war – and confirm that the U.S. knew remarkable details about the transfer of arms from Benghazi to Syrian jihadists,” stated Tom Fitton, Judicial Watch president. “These documents show that the Benghazi cover-up has continued for years and is only unraveling through our independent lawsuits. The Benghazi scandal just got a whole lot worse for Barack Obama and Hillary Clinton.”

We as a nation, claim that we are fighting terrorists. How so? Especially when the terrorists are in the White House and in the State Department as well.

How to Actually Defeat Islam – Guaranteed

How to Actually Defeat Islam - Guaranteed