Evidence that Andrew Breitbart May Have Been Murdered to Conceal #Pizzagate

If by chance you’re not entirely familiar with all the buzz surrounding the #PizzaGate story, I suggest you take a look at the post titled, One-Stop Shop With Everything You Need Regarding the PizzaGate Pedophile Ring. That post will get you up to speed quickly.

As I highlight in the video below, as does the article following the video, almost immediately after the death of Andrew Breitbart there were suspicions that perhaps Andrew had been murdered. Several comments Breitbart made in days leading up to his death, certainly would have made various public officials very nervous, not the least of which was President Barack Obama.

Looking back now, especially at the texts Breitbart posted just before his death, it’s glaringly obvious that Breitbart was all too aware of #PizzaGate. You don’t need an intimate understanding of the scandal to realize that there is a 100% chance several of Andrew’s tweets leading up to his death specifically specifically about those involved in #PizzaGate, however at the time they probably sounded crazy even to those closest to him, unless he’d shared the secret.

In the video below, I review the basic timeline you can get in much more detail in the post titled, One-Stop Shop With Everything You Need Regarding the PizzaGate Pedophile Ring, and put the events surrounding Breitbart’s death in the context of what we already know about #PizzaGate. The results are jaw-dropping.

Due to the ongoing citizen investigation, on both the conspiracy sub-reddit as well as the new Voat pizzagate subverse, that has risen up to fill the void left by the absence of legal action that some would consider an absolute dereliction of duty, an obvious link between the death of Andrew Breitbart and the Pizzagate investigation has been uncovered.

There were many who spoke out about the death of Andrew Breitbart, naming it foul play.

Not hours after his death was confirmed in early March, skeptics were quick to question what role his passing may have had in relation to a public address he delivered earlier in 2012. 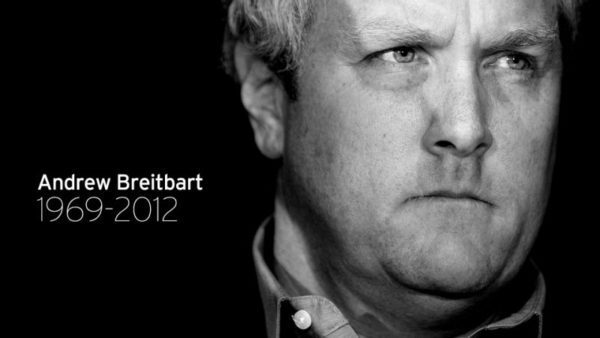 Speaking to the audience at the Conservative Political Action Conference in Washington, D.C. only weeks earlier, Breitbart claimed he had videos that would end the political career of US President Barack Obama.

Yet it wasn’t until his coroner, the one responsible for declaring his cause of death(also at the center of much controversy), turned up dead from arsenic poisoning within hours of the release of Breitbart’s preliminary autopsy report that the theory truly began to materialize.

Many of Breitbart’s tweets leading up to his death were very accusatory and seemingly irrational at the time. 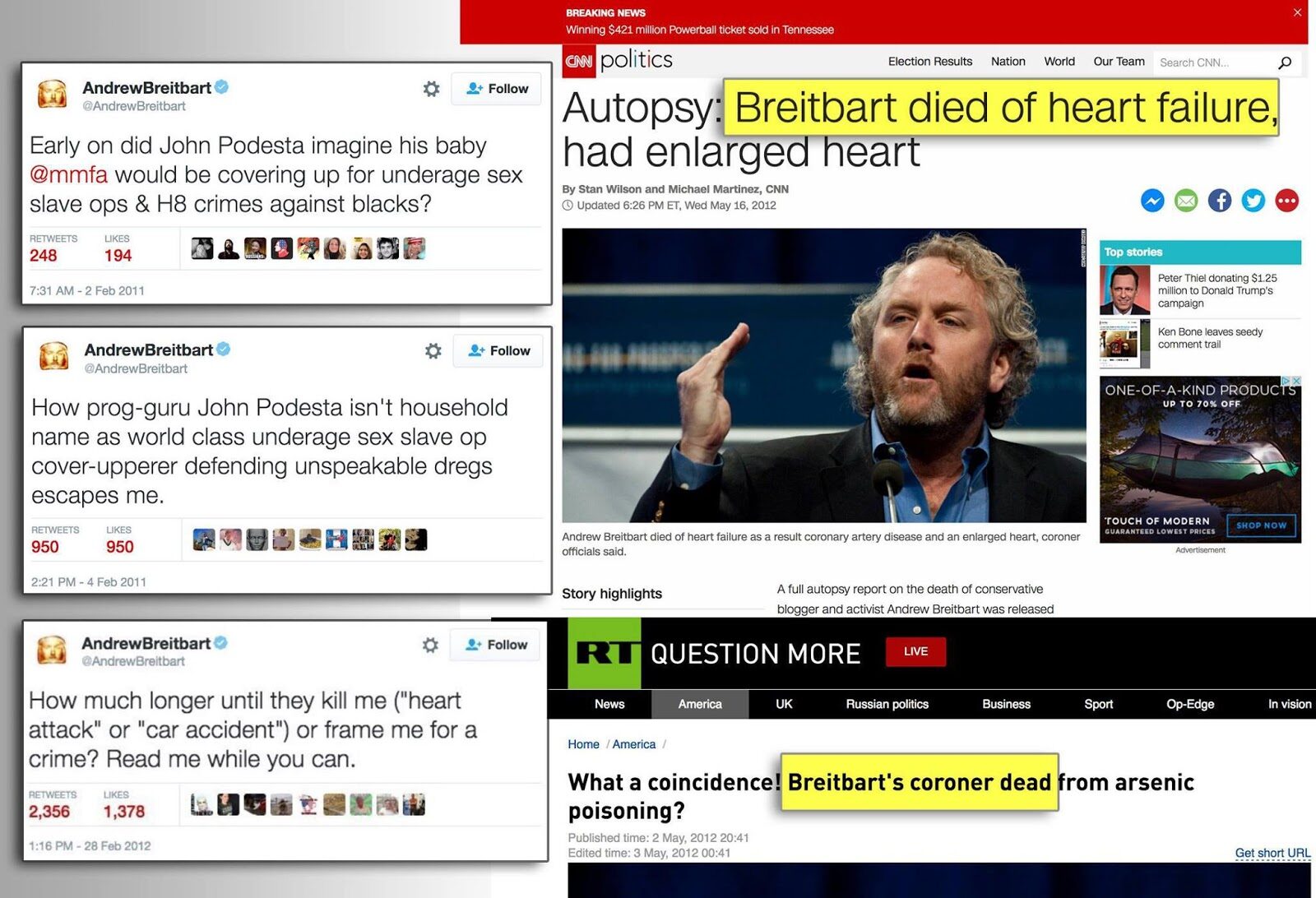 However, following WikiLeaks’ release of the hacked emails from John Podesta, uncovering the horror that is pizzagate, his tweet’s context began to form.

What is being uncovered in this new line of investigation is startling to say the least, as it was a story all were familiar with.

Sadly, few rallied to his side during the time of these obviously relevant tweets, but now that the public is increasingly aware of this story his attempts to warn the people will not go unheeded.

The public was clearly lacking the deeper understanding of the story which Americans have gained in recent weeks due almost entirely to the tireless efforts of the alternative media.

The Daily Sheeple website was recently brought down due to an article exposing #PizzaGate.

Breitbart had attempted to call out Media Matters for covering up “underage sex slave operations” that connected back to Planned Parenthood.

Media Matters is a company founded by David Brock, who is the ex boyfriend of James Alefantis; yes, the same Alefantis who currently owns the very epicenter of this entire scandal: Comet Ping Pong. 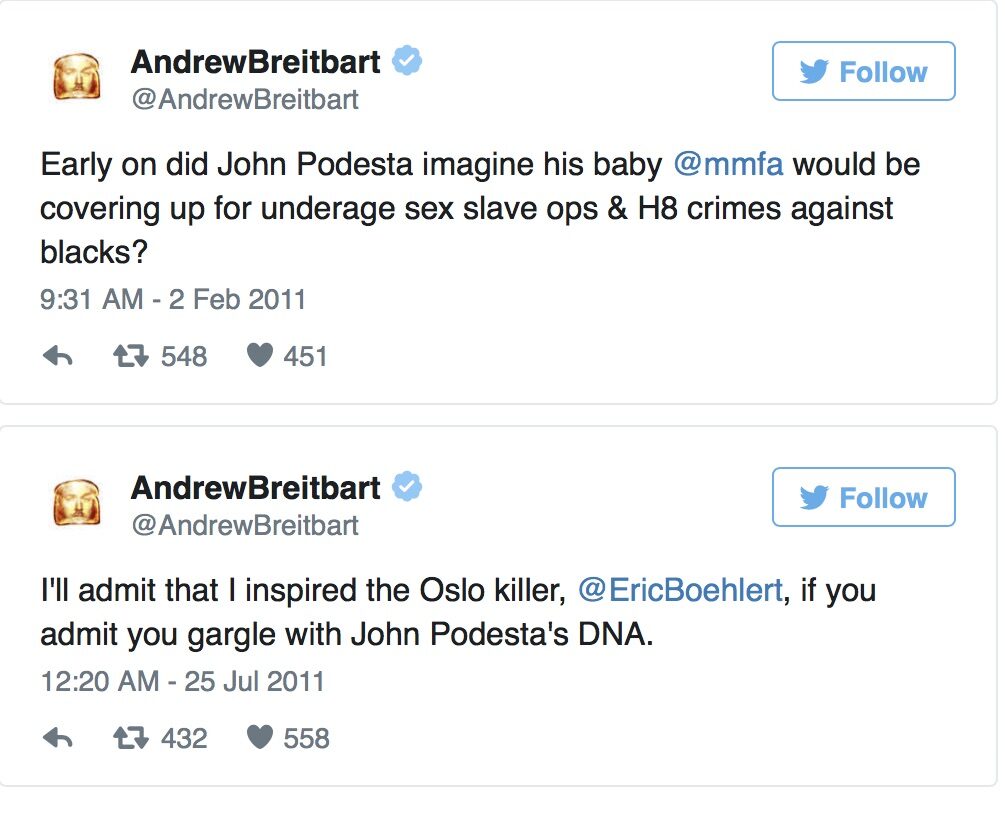 One such “coincidence” could be explained away and ignored, as they all too often are, yet this entire investigation is spilling over with such coincidences.

Yet all the people are asking for is a legitimate response from law enforcement that honestly addresses the facts at hand, if that is even a possibility in modern America.

At what point can this no longer be ignored?