EXPOSED: Facebook Makes Wrong Call On Nearly HALF Of Posts Reported As Offensive

For months, Facebook has been censoring, scrubbing and banning posts deemed to be hate speech.

And despite the claim in this article that “anti-Muslim rhetoric” was left up, in reality, it is quickly and efficiently scrubbed.

I’m not talking about comments such as the ones quoted below, calling for mass murder and genocide — those are never acceptable under any circumstances, directed at any group, and should be removed.

No, Facebook acts swiftly to shadowban or block or flag as “hate speech” essentially all comments and users who dare violate the sharia.

And it’s getting worse.

My feed has been blocked and banned.

Facebook daily referrals were 90K plus back in February; today they are under 2k.

My feed is blocked from my millions of followers on Facebook, and I have seen my circulation drop precipitously in the past few months.

For news publishers, Facebook is the motherboard of link traffic.

No news site can survive without them.

None of us are immune, which is why my traffic is down upwards of 95% since the block.

My Facebook page has well over a million followers; add my organizations to that, and it is roughly two million people.

And all this is because what I write is deemed “hate speech” by leftist Facebook censors who don’t even consistently apply their own rules, except when it comes to foes of jihad terror.

Look at a post they flagged as hate speech: it was calling for defense of Jews against a Nazi rally: 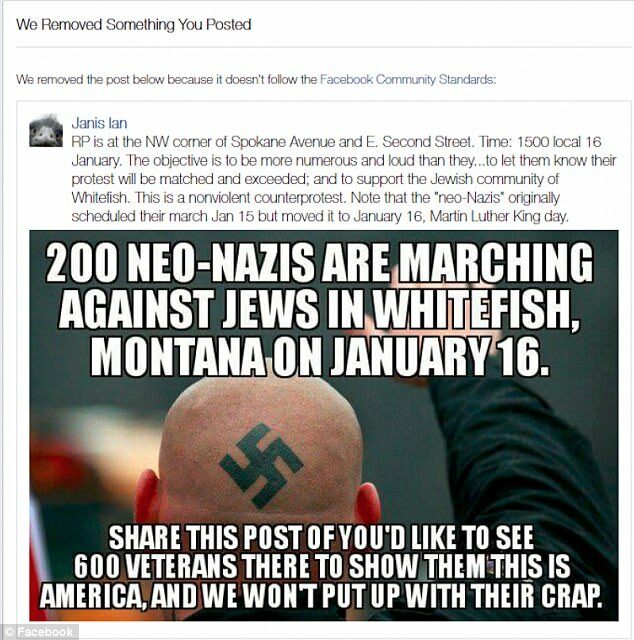 This has all been arranged at the highest levels.

A chief officer from a major American communications company went to the terror state of Pakistan to assure the Pakisstani government that Facebook would adhere to the sharia.

The commitment was given by Vice President of Facebook Joel Kaplan, who called on Interior Minister Chaudhry Nisar Ali Khan.

“Facebook has reiterated its commitment to keep the platform safe and promote values that are in congruence with its community standards.”

Because under Islamic law, you cannot criticize Islam.

Facebook adhering to the most extreme and brutal ideology on the face of the earth should trouble all of us, because Mark Zuckerberg has immense power.

He controls the flow of information.

He controls what you see and don’t see on Facebook.

We did not give him the power to abridge our unalienable freedoms.

The US government used anti-trust laws to break up monopolies.

Section 2 of the Sherman Act highlights particular results deemed anti-competitive by nature and prohibits actions that “shall monopolize, or attempt to monopolize, or combine or conspire with any other person or persons, to monopolize any part of the trade or commerce among the several States, or with foreign nations.”

Why shouldn’t the same be applied to information?

The United States government took down Standard Oil, Alcoa, Northern Securities, the American Tobacco Company and many others without nearly the power that Facebook has.

And the USG broke up Ma Bell.

President Theodore Roosevelt sued 45 companies under the Sherman Act, while William Howard Taft sued 75, and the fact that the US government used these vicious anti-capitalist laws to destroy huge industrial giants must be used in defense of free speech?

“Facebook apologises for its moderation ‘mistakes’ after investigation reveals it makes the wrong call on nearly HALF of posts reported as offensive,” by Phoebe Weston, Mailonline, December 29, 2017:

Facebook has apologised after an investigation revealed moderators make the wrong call on almost half of posts deemed offensive.

The site admitted it left up offensive posts that violate community guidelines despite being armed with 7,500 content reviewers.

One such post was a picture of a corpse with the words ‘the only good Muslim is a f****** dead one’ which was left up by moderators despite being flagged to them.

Another showed a woman passed out on a bed, with the caption ‘what would you do?’.

According to the investigation, content reviewers do not always abide by the company’s guidelines and interpret similar content in different ways.

Users reported both posts but received an automated message from Facebook saying it was acceptable.

‘We looked over the photo, and though it doesn’t go against one of our specific Community Standards, we understand that it may still be offensive to you and others’, the message read.

In the case of the woman passed out, Facebook defended its choice to leave it on the site as the caption by a feminist and activist, condemned sexual violence.

The caption read ‘women don’t make memes or comments like this #NameTheProblem’.

However, another anti-Muslim comment – ‘Death to the Muslims’ – was deemed offensive after users repeatedly reported it.

All comments on the reported posts were violations of Facebook’s policies but only one was caught, according to the full investigation by independent, nonprofit newsroom ProPublica.

The non-profit sent Facebook a sample of 49 items containing hate speech, and a few with legitimate expression from its pool of 900 crowdsourced posts.

The social network admitted its reviewers made mistakes in 22 of the cases.

Facebook blamed users for not flagging the posts correctly in six cases.

In two incidents it said it didn’t have enough infomation to respond.

Overall, the company defended 19 of its decisions, which included sexist, racist, and anti-Muslim rhetoric….

Fight Over Trump's Financial Records Will Head to Supreme Court

The Debt Ceiling Deadline Has Passed, And Now The Biggest Test Of Donald Trump’s Presidency Begins…

The Debt Ceiling Deadline Has Passed, And Now The Biggest Test Of Donald Trump’s Presidency Begins…