Apparently, Facebook approved a “Kill Mitt Romney” page that was put up and left up over 17 days. I pointed out that Twitter followed a similar example in the George Zimmerman case a few months ago.

The description for the page indicates its purpose, which is a directly threat on the life of Mitt Romney stating,

“This is a page advocating the murder of Republican Presidential candidate Mitt Romney.”

What’s even more disturbing is the page had 30 likes!

While many users complained about the page and rightly so, all they received was an email stating the following:

Thanks for your recent report of a potential violation on Facebook. After reviewing your report, we were not able to confirm that the specific page you reported violates Facebook’s Statement of Rights and Responsibilities.

Learn more about what we do and don’t allow by reviewing the Facebook Community Standards:https://www.facebook.com/communitystandards.

Give us feedback to let us know how we are doing. 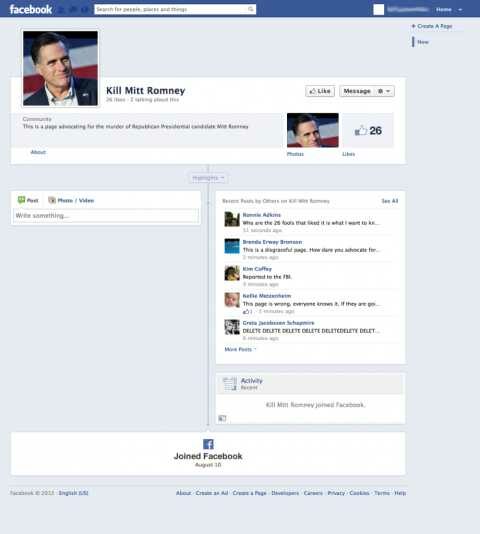 Safety is Facebook’s top priority. You may not credibly threaten to harm others, or organize acts of real-world violence. We remove content and may escalate to law enforcement when we perceive a genuine risk of physical harm, or a direct threat to public safety. We also prohibit promoting, planning or celebrating any of your actions if they have, or could, result in financial harm to others, including theft and vandalism.

Even as I was researching the issue, the page has been pulled from Facebook. It’s previous residence was here. Apparently word got out and hundreds of people flooded Facebook with protests about the page, which apparently drew more than an automated response.

One wonders if things like this will continue Facebook’s downward spiral among Wall Street Stocks. One thing is for sure, no one should be threatening anyone’s life. It’s good Facebook finally pulled the page, even if it took an avalanche of emails reporting it to do so.

Kim Kardashian Wedding, Kids React To Old Computers, And A Cat Plays Jenga – The US has become a Society Addicted to Entertainment