The left-wing elites and their running dogs in the enemedia are in one of their fictional publicity campaigns that they as masquerade as urgent news. Their latest terror is “fake news sites.”

The New York Times reported shortly after the election that Google and Facebook “have faced mounting criticism over how fake news on their sites may have influenced the presidential election’s outcome.”

That was fake news in itself: “Fake news” didn’t influence the presidential election’s outcome; all too real news about the wrong direction in which our nation was headed under Barack Obama did. Nevertheless, the Times said that “those companies responded by making it clear that they would not tolerate such misinformation by taking pointed aim at fake news sites’ revenue sources.”

How would they do that? “Google kicked off the action on Monday afternoon when the Silicon Valley search giant said it would ban websites that peddle fake news from using its online advertising service. Hours later, Facebook, the social network, updated the language in its Facebook Audience Network policy, which already says it will not display ads in sites that show misleading or illegal content, to include fake news sites.”

A Facebook spokesman explained: “We have updated the policy to explicitly clarify that this applies to fake news. Our team will continue to closely vet all prospective publishers and monitor existing ones to ensure compliance.”

The “fake news” controversy has become a huge international story, with the Los Angeles Times among those leading the charge with headlines such as “Want to keep fake news out of your newsfeed? College professor creates list of sites to avoid“; “Fake news writers: ‘Hillary Clinton, here are your deplorables‘”; and “Fake news writers abuse the 1st Amendment and endanger democracy for personal profit.”

I always understood that the objective was to taint the conservative news-sphere. Sites were created by them to attack themselves and shame the right-wingers who jumped on it. This is classic disinformation. It’s always games, games, games … from the people who brought you Soros’ rent-a-mob risking a few deaths, and rioting, theft and destruction in cities, etc. But I didn’t see coming what is their ultimate goal: the shut-down of free speech. They want to crush free speech, which has been in their cross-hairs for some time now.

The left is always preaching about true democracy, but they seize power as fast and as ruthlessly as they can. And they’re always harping about “controversial” matters that either don’t exist or are fabricated, or are of little import.

If a blogger or news writer gets a story wrong, does that designate him or her, or his or her site, as “fake news”? If that’s the case, they’ll have to shut down the New York Times, the Los Angeles Times, the Boston Globe, ABC News, NBC News, CBS News, CNN, etc. They get things wrong all the time. Every article written about my colleagues, my work, or myself is fake. Everything they wrote and didn’t write about the Orlando mass slaughter at the gay nightclub was disinformation and deception.

If you issue a correction, does that somehow remove the fake news scarlet letter? This is all a big fat lie – it is an end-run around the First Amendment, and it’s disastrous. It is indeed true that Facebook has too much power, but banning “fake news” sites is hardly the solution. That’s Zuckerberg’s fix-it? It would be funny if it weren’t so Hitlerian. Facebook’s news curators, mini-Goebbelians, are more frightening than Kafka’s antagonists. The site should be broken up like Ma Bell was. Facebook doesn’t decide what’s good and what’s forbidden. Left-wing fascists do not and must not decide what news people can and cannot see. But that’s exactly what we are seeing on Facebook.

Look at these recent screenshots; this news story of a double honor killing was banned: 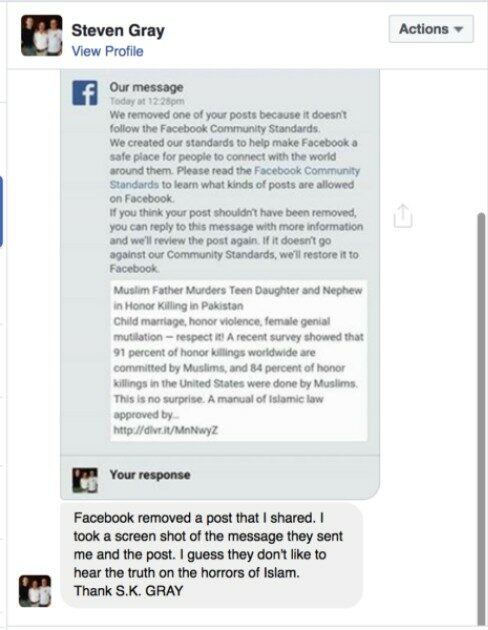 That’s not screening out “fake news” – that’s just more pro-Islamic manipulation of the news to keep people ignorant about the problems involved with mass Muslim migration. In September 2015, German Chancellor Angela Merkel strong-armed Zuckerberg to censor posts critical of the migrant invasion. CNBC reported that Merkel was “overheard confronting Facebook CEO Mark Zuckerberg over incendiary posts on the social network.” What kind of incendiary posts? Pro-jihad terror posts? No: Merkel was angry about posts criticizing her policy of inundating Germany with Muslim migrants.

The CNBC report continued: “On the sidelines of a United Nations luncheon on Saturday, Merkel was caught on a hot mic pressing Zuckerberg about social media posts about the wave of Syrian refugees entering Germany, the publication reported. The Facebook CEO was overheard responding that ‘we need to do some work’ on curtailing anti-immigrant posts about the refugee crisis. ‘Are you working on this?’ Merkel asked in English, to which Zuckerberg replied in the affirmative.”

That Zuckerberg agreed to do Merkel’s bidding on this shows what a vacuous meathead he is.

But that can’t. Freedom of speech is the foundation of a free society. Without it, a tyrant can wreak havoc unopposed while his opponents are silenced. We must fight all the harder now to defend and preserve this fundamental freedom.

Article reposted with permission from WND

Datamining of Children: Be Aware and BeWare – Parents Be Warned!