Barack Hussein Obama is strutting around, boasting of his ending the war in Afghanistan. However, let’s be reminded of one United States Marine’s father’s reply to a condolence letter from Obama, in which he rebuked the idiot-in-chief over the rules of engagement that have led to the deaths of many of America’s servicemen.

This past week, the US commander of NATO declared the end of the mission against the Taliban in Afghanistan. Obama followed up with a statement declaring, “Our combat mission in Afghanistan is ending and the longest war in American history is coming to a responsible conclusion.”

However, I want to take the opportunity to remind people of what Barack Obama has done that has resulted in the deaths of many of our men who serve in the armed forces. 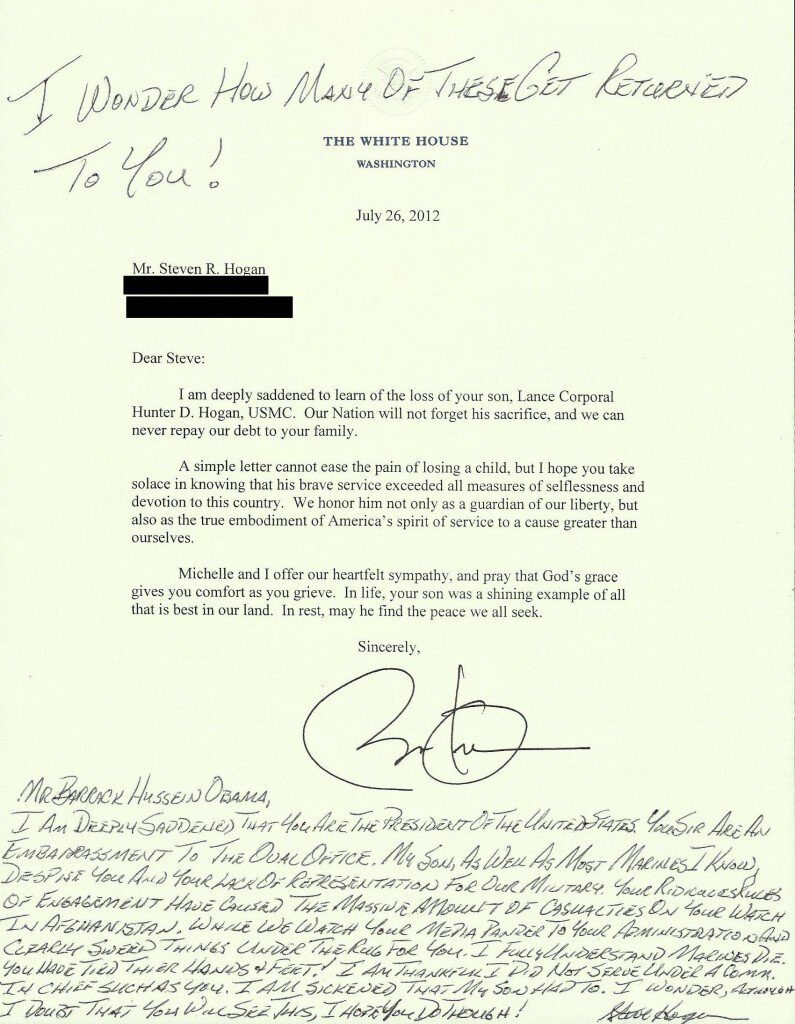 Steven R. Hogan, father of fallen US Marine Lance Corporal Hunter D. Hogan took the condolence letter he received from Barack Obama and wrote with his own hand the following:

“I wonder how many of these get returned to you! “Mr. Barrack Hussein Obama,

I am deeply saddened that you are the President of the United States. You sir are an embarrassment to the Oval Office. My son, as well as most Marines I know, despise you and your lack of representation for our military.

Your ridiculous rules of engagement have caused the massive amount of casualties on your watch in Afghanistan. While we watch your media pander to your administration and clearly sweep things under the rug for you, I fully understand Marines die. You have tied their hands & feet!

I am thankful I did not serve under a Comm. in Chief such as you. I am sickened that my son had to. I wonder… I doubt that you will see this, I hope you do though!”

Mr. Hogan, I salute you sir and express sincere condolences for the sacrifice you have made of your son. For that, I am deeply saddened and I truly mean that, never being able to imagine one of my own son’s lives being sacrificed in such a manner. But more than that, thank you for stating so clearly what I have heard from other family members who have lost their loved ones under Barack Hussein Obama in Afghanistan.

Billy Vaughn, father of fallen Navy SEAL Aaron Vaughn, who died aboard Extortion 17 along with 37 others including nearly two dozen SEALs, told me the exact same when I interviewed him in August 2013. Vaughn called Obama’s rules of engagement “ridiculous, if not criminal” and later would declare, “The greatest threat the US faces resides at 1600 Pennsylvania Avenue.”

Yet, all that has come from the Vaughn’s message about the issues regarding Extortion 17, which Billy outlined in his book Betrayed: The Shocking True Story of Extortion 17 as told by a Navy SEAL’s Father has been nothing more than a brief congressional hearing to appease them, which has produced nothing.

Though the “end” of the Afghanistan War has been declared and Obama has claimed that Afghanistan is “not going to be a source of terrorist attacks again,” Kia Makerechi says that is not really the truth. She writes:

But while the administration would like to characterize this as a victory, the end of a conflict, it’s more of a re-branding. More than 10,000 United States troops will remain in Afghanistan, and just over one month ago, the president secretly expanded their 2015 combat mission to include fighting with the Taliban and/or al-Qaeda, the Haqqani network, or other insurgent groups. The expansion of duties, which was first reported in The New York Times, also allows for the use of American manned aircraft and drones. Some 4,000 NATO troops will also remain in Afghanistan next year.

According to the United Nations, 2014 is the deadliest year of the war since they began counting casualties in 2008. More than 10,000 civilians are expected to die in Afghanistan by January 1.

“For more than 13 years, ever since nearly 3,000 innocent lives were taken from us on 9/11, our nation has been at war in Afghanistan,” Obama’s statement about the changing missions read. The president highlighted the “extraordinary sacrifices” of troops, some 2,200 of whom have died to date during the $1 trillion war. “We are safer, and our nation is more secure, because of their service,” Obama said.