The attorneys and Judge Gloria Navarro demonstrate that they have no shame in what they will do in their relentless pursuit of men charged with multiple accounts from the Bundy Ranch siege 2014.  In the latest move by the prosecution, they are seeking to use participation in their stand at Sugar Pine Mine in April 2015, the White Hope Mine in August 2015 and membership in the Idaho III% militia against them in a retrial set for this summer.

In April, the jury found Greg Burleson and Todd Engel guilty on several charges against them but was a hung jury when it came to the charges against Richard Lovelien, Scott Drexler, Eric Parker, and Steven Stewart.  While the prosecution has sought to dismiss the remaining charges against Burleson and Engel for retrial, claiming it would save the court and the government time, they remain unwilling to do so for the other four men, whom they failed to make a case against so that the jury would find them guilty.  In fact, their case was so poor, that documents from the jury indicate that they were leaning towards a verdict of “Not Guilty” on the most serious charges of conspiracy.

In the latest move by the prosecution, they are seeking to introduce evidence, which they claim is “of intent, preparation, plan, knowledge, identity, absence of mistake, modus operandi, and /or lack of accident.”hod

The prosecution claims the evidence is “inextricably intertwined with, the conspiracy charged in the Superseding Indictment.”

That’s interesting since they didn’t bring this “evidence” in the first trial, but I digress.

So, what evidence did they cite?  According to the filing submitted on Friday, they are going to point to some of the defendants being involved at stands they took at Sugar Pine Mine in April 2015 and White Hope Mine in August 2015, as well as being members in the Idaho III% militia.

According to the prosecution, “The government intends to introduce evidence that, following the events of April 12, 2014, defendants Eric Parker, Steven Stewart, and Scott Drexler joined a militia group referring to themselves as the Idaho chapter of the “III%.”  As part of their membership, they participated in two additional “operations” (discussed further below) whereby they threatened to use force and /or presented a show of force, on the public lands to prevent federal officers from taking enforcement actions in those areas.  Defendant Parker also subsequently shared on social media photographs of himself participating in the events of April 12, 2014, over which the “III%” logo appears to be superimposed.”

OK, fine.  What’s the problem here?  These guys joined after the Bundy Ranch siege, not before it!  This should not be allowed to be evidence against them as a “conspiracy” at Bundy Ranch.  Second, the militia is constitutional, as the Second Amendment affirms, and furthermore, the militia is the very entity charged in the Constitution with law enforcement, not “federal officers.”

Listed in Article 2 of the US Consitution are the enumerated powers of Congress.  Among those powers is the authority to call up the militia, something they don’t seem to want to do any more today, in a similar manner to using letters of marque and reprisal, which were used during the Barbary Wars.  Instead, they want to maintain a standing army, which has to be renewed every two years per the Constitution but is something our founding fathers warned against.

The Congress shall have Power To …provide for calling forth the Militia to execute the Laws of the Union, suppress Insurrections and repel Invasions…. ARTICLE I, SECTION 8, CLAUSE 15

Second, the prosecution said they would be bringing evidence in of “Operation Gold Rush” at Sugar Pine Mine.

“On or about April 2015, defendants Eric Parker and Scott Drexler traveled to a mining site located on land administered by the Bureau of Land Management (BLM) in Josephine County, Oregon,” government prosecutors wrote.  “As members of the Idaho III% group, Parker and Drexler, along with others affiliated with the “Oath Keepers” and “III%er” groups, conducted armed patrols and presented as a show of force in order to prevent federal officers from entering the property and taking any regulatory efforts with respect to the mine.” 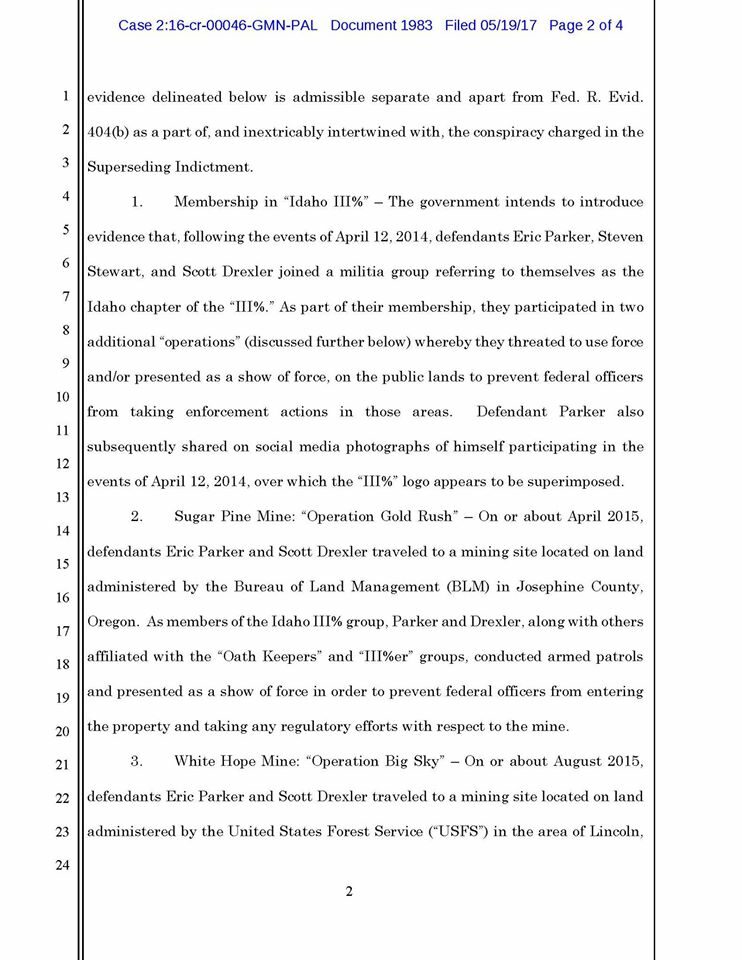 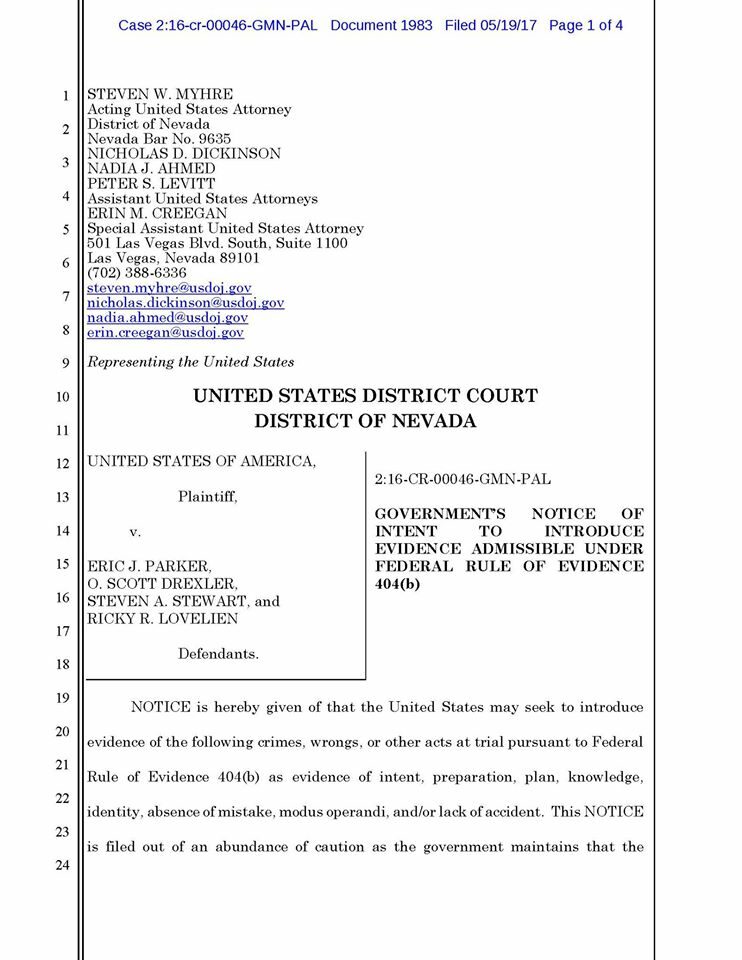 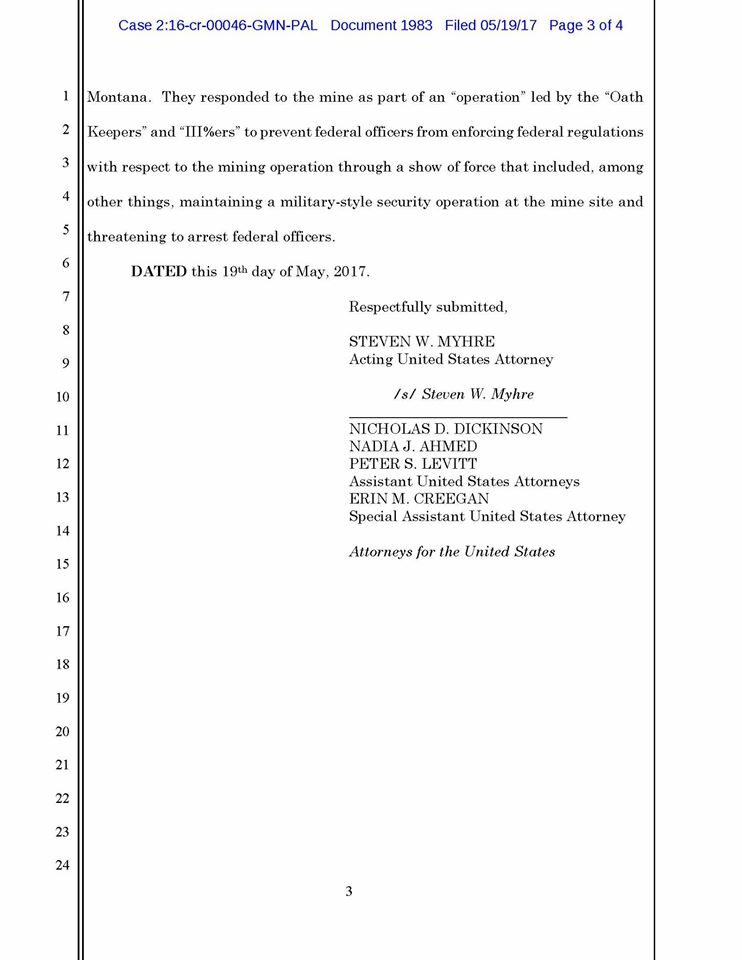 However, what should be understood here is that there was merely a seeking to enforce the laws of the land, as our Constitution does not give privilege to the central government in ownership of the land without the express consent of the state legislature, which has never occurred.  The criminal activity that was going on at Sugar Pine Mine was that which was engaged by the agents under the direction of the Department of the Interior, just like at Bundy Ranch and just like at White Hope Mine, which is where the next bit of evidence the prosecution claims to bring forth comes from.

“‘Operation Big Sky’ – On or about August 2015, defendants Eric Parker and Scott Drexler traveled to a mining site located on land administered by the United States Forest Service (“USFS”) in the area of Lincoln, Montana,” the prosecution wrote.  “They responded to the mine as part of an “operation” led by the “Oath Keepers” and “III%ers” to prevent federal officers from enforcing federal regulations with respect to the mining operation through a show of force that included, among other things, maintaining a military-style security operation at the mine site and threatening to arrest federal officers.”

Again, I ask, if federal officers are violating the Constitution, is it not the job of American citizens, specifically those in the militia to “execute the Laws of the Union” per the Constitution?  I realize that Congress did not call them up, but can’t we all agree that Congress is complicit in these land grabs and the establishment of these unconstitutional agencies?

Finally, I’d just like to point out the hypocrisy here in going all over the map to bring in evidence of an alleged conspiracy, but the Court will not allow the defense to call the government’s star witness and all around thug in the case, Daniel P. Love, to the stand, who was found guilty of misconduct by the Inspector General and suspended from his job at the BLM by the Department of Interior in October 2016.

The feds do not want their own crimes, unconstitutionality and misconduct exposed to the public while they are hypocritically seeking to get a guilty verdict against patriots.

This entire circus is a mockery of justice and our Constitution, and instead of being ashamed, Judge Navarro and the prosecution do these things in the light of day.