Fourth Amendment Free Zones – Do You Live In One?

Americans continue to lose their Constitutional rights in the name of “security” at a rapid pace.  The Second Amendment has been the most obvious, but the First, Fifth and Tenth Amendment are being usurped by the U.S. government in a disturbing trend.

The Fourth Amendment is the most recent in this series.  Increasing surveillance – such as New York’s proposal to monitor the streets by camera and save the data, Bloomberg’s “stop and frisk,” the NSA’s snooping programs, and PRISM revelations – has drawn this accusation, and now the Department of Homeland Security has become involved.

In the name of “border security,” a recent report defended the idea of so-called “Fourth Amendment Free Zones” within 100 miles of every border and the ocean.

In these areas, DHS agents can search and examine electronic devices, search through peoples’ belongings, and shake them down, all without probable cause.  This effectively suspends the rights of 197 million Americans based on residence alone.  This was questioned in 2009, and the DHS agreed to investigate the “civil rights impact” of the practice, but the full report wasn’t released until nearly four years later. 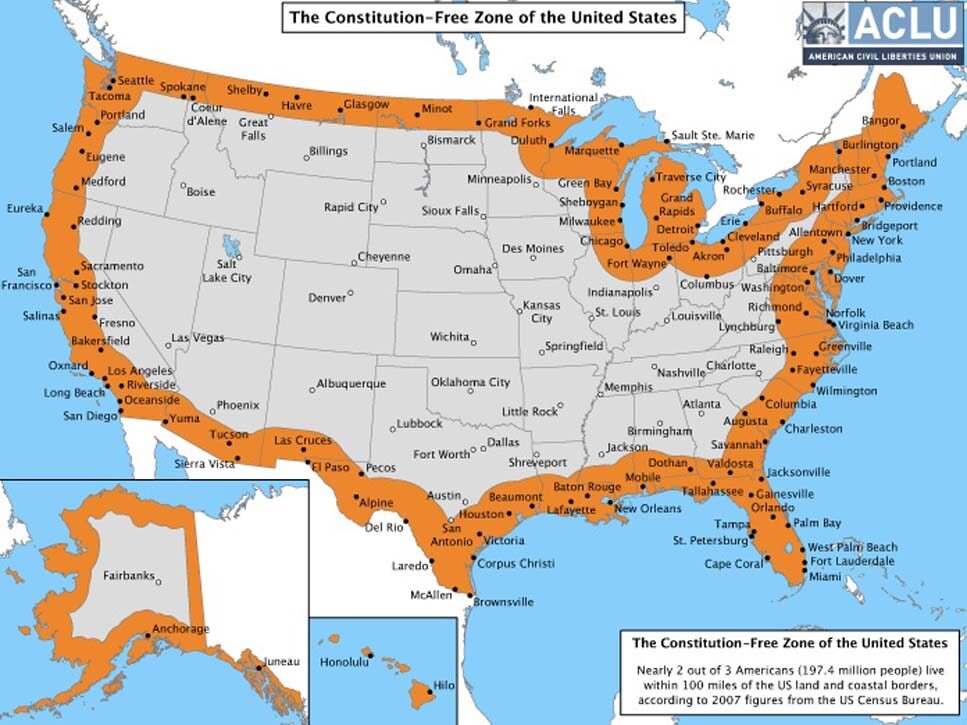 In February 2013, the DHS released an executive summary by its civil rights watchdog concluding that “imposing a requirement that officers have reasonable suspicion in order to conduct a border search of an electronic device would be operationally harmful without concomitant civil rights/civil liberties benefits.”  In other words, “it’s easier this way.”  According to the report, there were 685 electronic device searches from 2009-2010, with a total of 41 seizures.  All in all, about 6,500 travelers (2,995 of whom were citizens) have been searched since 2008.

As the DHS had initially released only the two-page executive summary of the report, the ACLU also filed a Freedom of Information Act request for the full DHS report, hoping, according to attorney Catherine Crump, “to establish that the Department of Homeland Security can’t simply assert that its practices are legitimate without showing us the evidence, and to make it clear that the government’s own analyses of how our fundamental rights apply to new technologies should be openly accessible to the public for review and debate.”  The full report contained arguments such as the importance of following “hunches,” and concrete data about numbers of seizures, but was no more convincing than the initial summary.  See report here.

It’s long been argued that Fourth Amendment rights don’t apply at the border.  This is why cars can be searched crossing from Canada or Mexico to the US, and why customs and security searches are allowed at airports.  Essentially the DHS has expanded the definition of the border to include everything within 100 miles of it and any ocean.  Instead of simply enforcing the border, the DHS has allowed agents to patrol thousands of square miles within the United States, something which is neither more efficient nor constitutional.

It isn’t difficult to see how this precedent could easily be expanded.  If federal agents have permission to search a defined set of property – such as a computer or on someone’s person – then there is nothing to prevent them from searching any property they appropriately deem.  Geographically, there’s little difference between 100 miles and 200 from the border.  Even if 100 miles remains the threshold, and airports – which are already considered the “border” – are added to borders and beaches, there will be virtually nowhere within the US in which Fourth Amendment rights remain.  Neither of these is fundamentally different than the DHS’s current definition of “border.”

The DHS’s argument that retaining the Fourth Amendment would be “operationally harmful” is also somewhat disingenuous.  It has always been the case that not having to obtain a search warrant would make finding criminals easier, but it has also always been the case that having to obtain a search warrant reduces the opportunity for corruption and unfair law enforcement practices.  Virtually no one is doing everything right all the time, but with the Fourth Amendment people are still free to go about their business with some degree of confidence, and police officers can focus on important legal violations.

For people worried about racial profiling, removing the Fourth Amendment is the single most damaging action which can be taken.  For people worried about political targeting, the same is true.  There’s nothing stopping the DHS from going through Houston, Charleston, Chicago or Anchorage searching the electronic devices of everyone with a third party bumper sticker – something which is already listed as a possible indicator that someone is a domestic terrorist – or someone who just looks a little different.

When Americans call for “securing the border,” they mean sending agents to patrol the border, not removing the rights of hundreds of millions of Americans.  This DHS definition alone is damaging, but combined with the extraordinarily dangerous legal precedent it sets, it sets the stage for further destroying American citizens’ Constitutional Rights.

Constitutional attorney Ed Mazlish told Benswann.com,  “while Americans are being asked/required at every turn to surrender their liberties in the name of security, the (real) terrorists are not … the unifying theme is that if you are truly an American citizen or if you are, in fact, no threat to America, then your constitutional rights are in jeopardy and expendable – but if you are not an American citizen or if you are antagonistic toward America, every indulgence is made to ensure that your right (presumably, your right to destroy and/or defile America) is protected.”