“We’re commanded to terrorize the disbelievers,” Morton told Griffin. “The Quran says very clearly in the Arabic language … this means ‘terrorize them.’ It’s a command from Allah.”

How is it that a devout Muslim who was sentenced in 2012 to more than 12 years in prison for making multiple death threats, recruiting for jihad, and plotting to kill the South Park creators, is not only free but has been hired as a university expert by George Washington University?

No, this is not The Onion.

Who is making this happen? Things don’t just happen, they are made to happen. Who is funding the destruction of America?

First, let me point out that my colleagues and I are blacklisted from college campuses. Nonie Darwish has had every university talk canceled on her. Robert Spencer, Wafa Sultan and I have not been invited to speak in years.

Younus Abdullah Muhammad, nee Jesse Morton, founded “Revolution Muslim” in 2008, along with his partner Yousef Mohamid Al-Khattab. Atlas readers are long familiar with this vicious cretin. Al-Khattab repeatedly threatened me as well. Back in 2008, he began posting threatening snuff-like death threat videos at a Pamela Geller hate site (below). 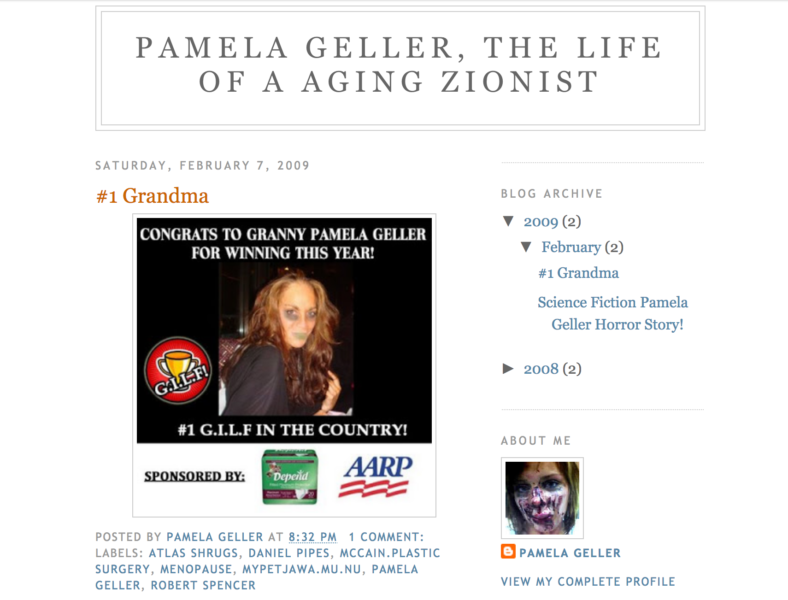 Targeting me when I marched in the Salute to Israel Day Parade: 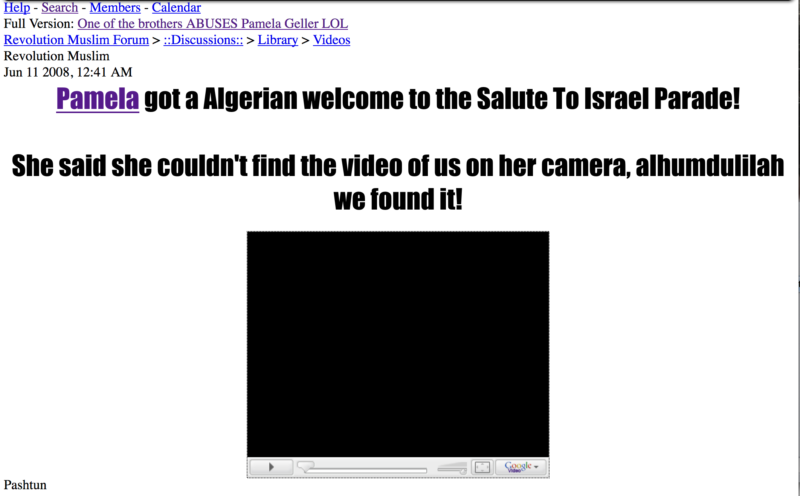 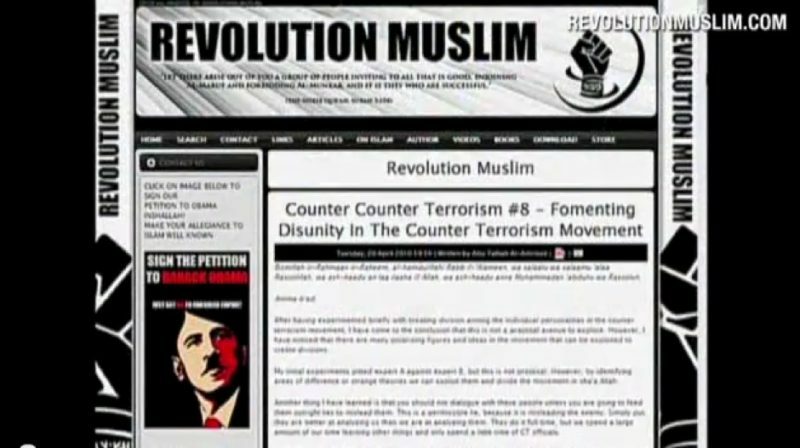 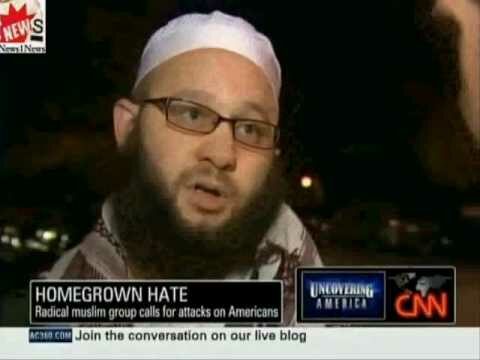 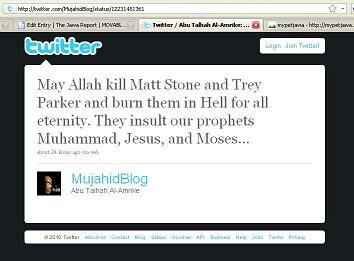 This is who George Washington University hired as an expert. Saudi multimillion dollar donations to university at work.

We’ve been calling for their arrest for years, and noting the very real and personal connections the group has with terrorists. Some of these connections are listed below. For instance, the personal relationship that Younes had with Samir Khan, the now dead al Qaeda propagandist. Samir, Younes, and Yousef were personal friends, not just online buddies.(Jawa)

Academia is worse than finished. The whole of it will have to be destroyed and rebuilt if we are to save our nation.

From the FBI indictment:

Jesse Curtis Morton, aka Younus Abdullah Muhammed, 33, of New York City, pleaded guilty today to using his position as a leader of Revolution Muslim Organization’s Internet sites to conspire to solicit murder, make threatening communications, and use the Internet to place others in fear.

“Jesse Morton operated Revolution Muslim to radicalize those who saw and heard his materials online and to incite them to engage in violence against those they believed to be enemies of Islam,” said U.S. Attorney MacBride. “We may never know all of those who were inspired to engage in terrorism because of Revolution Muslim, but the string of recent terrorism cases with ties to Morton’s organization demonstrates the threat it posed to our national security. We’re grateful to the FBI, NYPD, and their law enforcement partners throughout the world who made today’s conviction possible.”

“Individuals such as Morton who encourage violence and create fear over the Internet are a danger to our society and to the freedoms we enjoy as citizens,” said Assistant Director in Charge McJunkin. “Today’s plea, and other recent cases of those associated with Morton’s organization, demonstrate the widespread nature of this danger. Together with our partner law enforcement agencies, and with the assistance of the community, the FBI will continue to pursue those who promulgate violent extremism and promote the radicalization of others.”

‘Revolution’ leader sentenced: A New York City resident was sentenced in June to more than 11 years in prison for using his position as a leader of the Revolution Muslim organization to promote violent extremism online against those he believed to be enemies of Islam.

Muslim convert from Brooklyn was sentenced Friday to nearly 12 years in prison for posting online threats against the creators of the “South Park” television show and others he deemed enemies of Islam.

Morton’s site inspired a variety of would-be jihadis, including “Jihad Jane” Colleen LaRose; Antonio Benjamin Martinez, who plotted to bomb a military recruiting station; and Jose Pimental, who plotted to assassinate members of the U.S. military returning from Afghanistan and Iraq. He also corresponded with American al-Qaida member Samir Khan on writing an article for use as al-Qaida propaganda.

Morton’s prosecution was relatively novel under a law enacted in recent years that makes it a federal crime to use the Internet to place another person in fear of death or serious injury. Morton was arrested last year in Morocco, where he moved after Chesser’s arrest.

Morton and Zachary Chesser used the Revolution Muslim website to deliver thinly veiled threats against the creators of the “South Park” television show for perceived insults to the prophet Muhammad, by depicting him in a bear costume. (Chesser earlier received a 25-year sentence, but he also tried to travel to Somalia to join the al-Shabab terrorist group.)

George Washington University has hired a former Islamic extremist to work at its center on homeland security — a man who once denounced the United States and made threats against the creators of the TV series “South Park” for depicting the Prophet Muhammad in a bear suit.

While reformed extremists have worked at universities in Europe to help fight terrorism, this is believed to be a first in the United States.

Jesse Morton, who was known as Younus Abdullah Muhammad when he was a recruiter for the al-Qaeda, brings a “unique perspective” to counter-terrorism work, said Seamus Hughes, deputy director of the Program on Extremism at George Washington University’s Center for Cyber & Homeland Security.

“We haven’t figured out how to reach that individual who’s going down the path of radicalization,” Hughes said. “Jesse has been in that world and got out of that world.”

During his days as an extremist, Morton earned a master’s degree in international affairs from Columbia University.

Hughes said before making the hiring decision, he discussed Morton with the FBI, leaders in the security community and the lawyers that prosecuted Morton.

He said he’s sure Morton is completely reformed from the days he served time in federal prison after inciting people to join a terrorist organization.

“People go through phases. They evolve and are finally able to see the light,” she said.

She doesn’t think Morton made up his de-radicalization to get a shorter prison sentence.

He became one of the group’s chief propagandists and recruiters.

Morton and another extremist founded “Revolution Muslim” in 2008. In 2009 the pair praised Nadal Hasan for his attack at Fort Hood, Texas, which left 13 people dead and 32 others wounded.

They called Hassan “an officer and a gentleman.”

“We’re commanded to terrorize the disbelievers,” Morton told CNN’s Drew Griffin that year. “Americans will always be a target and a legitimate target until America changes its nature in the international arena.”

But during a trip to Morocco, Morton’s ideology slowly and subtly started to change as he met young secular Muslims.

“They were bright, they were articulate,” he said. “What they really wanted, at the end of the day, was what we have: freedom.”

But it was too late — Morton couldn’t escape his extremist past.

Totally Lost It: Nancy Pelosi Confirms That Her Mental Faculties Are No More