What Good Would More Gun Laws Do When the Feds Don’t Enforce the Ones We Already Have?

While lots of folks are debating adding more gun laws or protecting their gun rights, one thing is becoming increasingly clear. There are a lot of federal entities who aren’t enforcing the laws we already have, and because of this, tragedies are happening.

Why would we keep increasing the restrictions on guns for law-abiding citizens when the feds don’t even enforce the ones we already have?

The criminals would just continue to lie on their background checks and wouldn’t be found out because the “authorities” aren’t doing their jobs. It would only cause a greater burden on gun owners who’ve done nothing wrong.

Read on to see the epic fails that preceded two recent mass shootings.

Let’s go back to the guy who shot up that church in Texas. Last year on Nov. 5, 27 people were killed at a church in Sutherland Springs, Texas by Devin Patrick Kelley. (source)

Kelley was stopped when a neighbor overheard the massacre and came out to protect them. The neighbor, Stephen Willeford, engaged Kelley and shot him in an opening in his body armor. Willeford then pursued Kelley until he stopped. At that point, it still took police 5-7 minutes to arrive, but Willeford held Kelley at gunpoint until they did. (source)

BUT…Kelley wasn’t supposed to be able to buy a gun at all.

According to the laws already on the books, Devin Patrick Kelley was ineligible to legally purchase a firearm. He had been court-martialed and dishonorably discharged from the military for assaulting his previous wife and her infant son.

The Air Force was supposed to report this to the federal database, but they didn’t.

Had they reported it, it would have shown up on a background check for the gun store selling the firearms used during the attack. Kelley lied on his background check and since there were no records to dispute it, was taken at his word. (Imagine that, a criminal lying.)

The school shooting in Florida

Last week, our country was rocked by a horrific act of violence at Marjory Stoneman Douglas High School in Parkland, Florida. A 19-year-old man took an Uber to the school, then opened fire, killing 3 staff members and 14 students and injuring 14 others, after pulling a fire alarm.

The shooter was Nikolas Cruz, who had previously been expelled from the school and left with the students. It took an hour before he was captured. (source)

There were plenty of red flags.

For years, there had been warning signs that Cruz was extremely troubled.

He was adopted at birth by a family and lost his father in 2004. His mother passed away last November from the flu, but even before she died there were copious warning signs.

No one voluntarily reported Cruz’s mental health issues to the FBI or a state law enforcement agency for inclusion in the National Instant Criminal Background Check System, despite that fact that Florida state law requires it.

So, despite all these warning signs, he purchased guns and committed a heinous crime.

His goal was to be a school shooter.

But it gets far, far worse. Nikolas Cruz outright said in person and on social media more than once that his goal was to become a school shooter. And the FBI knew.

Here’s a screenshot of his Instagram page, which has since been removed. (Source: AlertsUSA) 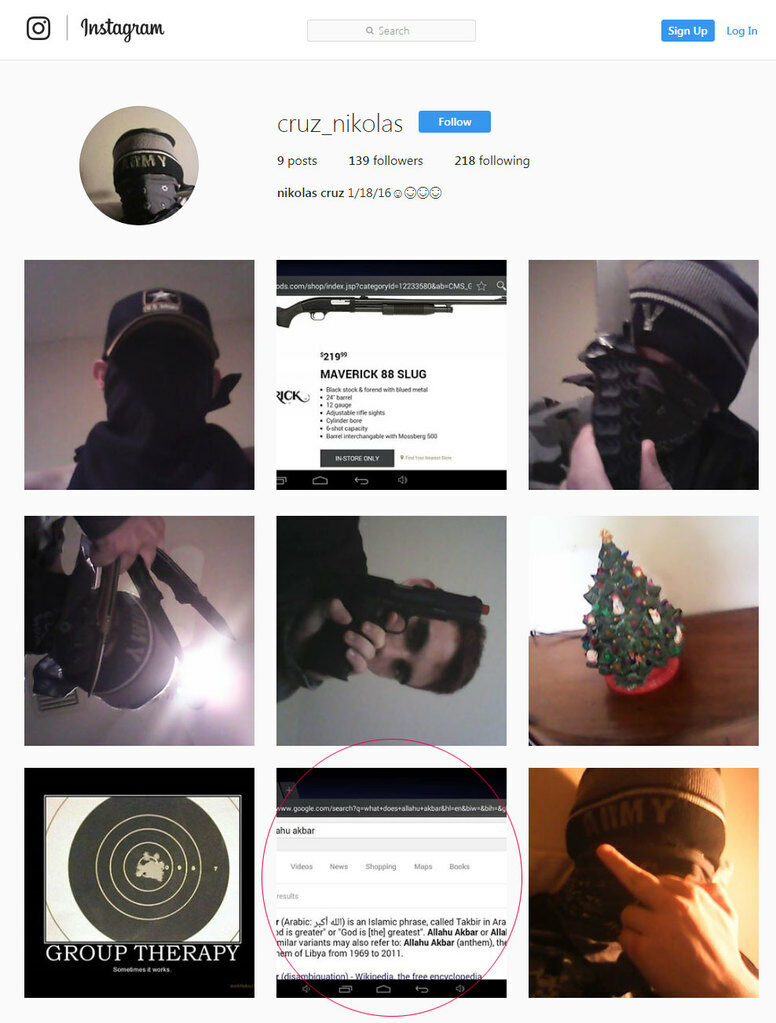 You’ll note that there is a reference to Islam on one post. Some say was Cruz mocking the religion and others say he was honoring the religion. Because we can no longer see the caption, it’s impossible to accurately speculate the reason he posted the photo.

Any way you look at it, though, this is a disturbing social media account.

But… once again, authorities failed to stop this crime before it started.

The worst thing of all, though, is that the FBI received more than one credible tip about Nikolas Cruz’s potential to be a school shooter.

The first one was in September when he made the following statement on Ben Bennight’s YouTube channel.

“Im [sic] going to be a professional school shooter.”

He signed it with his real name.

Bennight tried to email the FBI’s tip line and when his email bounced, he called the local field office. He reported the comment and two FBI agents took his statement. The FBI said:

“In September 2017, the FBI received information about a comment made on a YouTube channel. The comment said, ‘I’m going to be a professional school shooter.’ No other information was included in the comment which would indicate a particular time, location, or the true identity of the person who posted the comment,” said a statement released by Jackson, Miss., FBI field office spokesman Brett Car. “The FBI conducted database reviews and other checks, but was unable to further identify the person who posted the comment.” (source)

Bennight did everything he could to help the FBI. (Here’s the video he posted about it.) And so did the other person who reported Cruz to them as recently as last month.

But the FBI completely dropped the ball, just like the Air Force did in the case of Devin Kelley in Texas.

In a statement, the FBI admitted:

On January 5, 2018, a person close to Nikolas Cruz contacted the FBI’s Public Access Line (PAL) tipline to report concerns about him. The caller provided information about Cruz’s gun ownership, desire to kill people, erratic behavior, and disturbing social media posts, as well as the potential of him conducting a school shooting.

We have determined that these protocols were not followed for the information received by the PAL on January 5. The information was not provided to the Miami Field Office, and no further investigation was conducted at that time. (source)

Dr. Ron Paul has more to say about the FBI’s failure to prevent this shooting.

And I have a question for those folks screaming for gun control.

Let me preface this by saying how heartbroken I am for the families of the victims of these massacres. I can’t imagine your pain or the rage you must feel because the warning signs were ignored. It was wrong and the appropriate people should be held accountable for failing in their responsibilities.

We must ask ourselves this question seriously.

If we don’t enforce the gun laws that are already on the books, what good will more gun laws do?

More laws will mean that innocent people have a greater burden and that bad people will continue to flout the law with no fear of repercussions.

I don’t want to lose my right to protect myself just because government agencies aren’t taking seriously their responsibilities in preventing crimes.

Devin Kelley should not have been able to buy a gun according to the current laws. But the Air Force did not follow them.

Nikolas Cruz flat out told everyone he was going to be a school shooter. But the FBI didn’t do anything to stop him. He had years of history of mental illness and behavioral problems. But these issues were not reported to the database that would have prevented him from purchasing a gun.

Is the problem really with law-abiding, innocent gun owners? Or is it more reasonably with the authorities who aren’t abiding by the responsibilities charged to them and the people who are intent on killing?

NO Justice For Justine Damond: Muslim Cop Who Shot Her Dead Still Refuses To Talk

Tyranny In Action: NM Cops Yank Window Out With Bare Hands, Drag Couple From Car After Wrongfully Accusing Them Of Not Wearing Seat Belts

Tyranny In Action: NM Cops Yank Window Out With Bare Hands, Drag Couple From Car After Wrongfully Accusing Them Of Not Wearing Seat Belts