GOP: We Could Have Eric Holder Arrested

Representative Jason Chaffetz (R-UT) appeared as a guest on Fox News on Friday afternoon and suggested to Megyn Kelly that Republicans in the House may direct the House Sergeant at Arms to arrest Attorney General Eric Holder should they exhaust all other options of obtaining the documents that have been requested of the Department of Justice. This statement comes in spite of Barack Obama’s assertion of executive privilege.

“If you actually look at the statute… [it] does say that you shall do this,” he explained. “And they’ll say, well, the precedent is that it hasn’t been done in the past. Again, we’ve got to get past this so-called precedent and do what the law says. The law says he (U.S. Attorney) shall pursue it, so he’s (Holder) has got a difficult situation on his hands.”

Kelly interrupted Chaffetz momentarily to state that there was an option to House Republicans and that is to ask the Sergeant-at-Arms to go and arrest Eric Holder. “Are you gonna do that?” she queried.

“That would be fairly dramatic, but yes,” Chaffetz replied. “Three options: going through the U.S. attorney, going into civil court or have the Sergeant-at-Arms take control of the situation — which I think some people are going to say we ought to do — but we’re going to exhaust the other ones first.”

It seems though that no matter what takes place, even if the Republicans have Holder arrested, that they will be unable to prosecute him because of Obama’s exercising of executive privilege. The Justice Department has already issued a letter stating that it “will not bring the congressional contempt citation before a grand jury or take any other action to prosecute the Attorney General.” 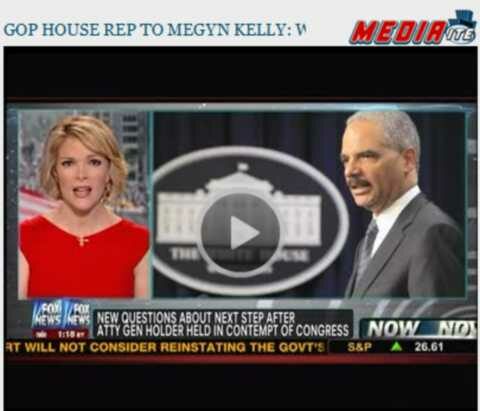