Oh, look how government trades the use of something that grows in nature for your rights to keep and bear arms that “shall not be infringed.”

Yep, is the liberal State of Hawaii that is going after users of cannabis.

The Honolulu Police Department has issued an order for medical marijuana users to “surrender your firearms.”

Not only is this is a violation of the Fifth Amendment’s protections, but since when did cops get to make such a decision?

KITV reports, “In a letter dated November 13th new Chief of police Susan Ballard states card-holders have 30 days to surrender weapons, permits, and ammunition to HPD or to transfer ownership. According to the letter, the only way card-holders can get their weapons back is to get clearance from their doctors.”

According to the Honolulu Star, the letter claims, “Your medical marijuana use disqualifies you from ownership of firearms and ammunition.”

Ballard cites Hawaii Revised Statutes, Section 134-7 (a) as the reason for the move. That section reads: “No person who is a fugitive from justice or is a person prohibited from possessing firearms or ammunition under federal law shall own, possess, or control any firearm or ammunition therefore.”

Interesting since people using medical marijuana would be able to do so under law even though “law” should have no governance over a plant in the first place.

Furthermore, these people do not necessarily qualify as a “prohibited” person since Ballard cannot point to a law in which they are in violation of nor can she point to a conviction, something the Fifth Amendment demands before one can lose their rights.

Leafly commented that the letters appear to represent “the first time a law enforcement agency has proactively sought out state-registered medical marijuana patients and ordered them to surrender their guns.”

Here’s a copy of the letter. 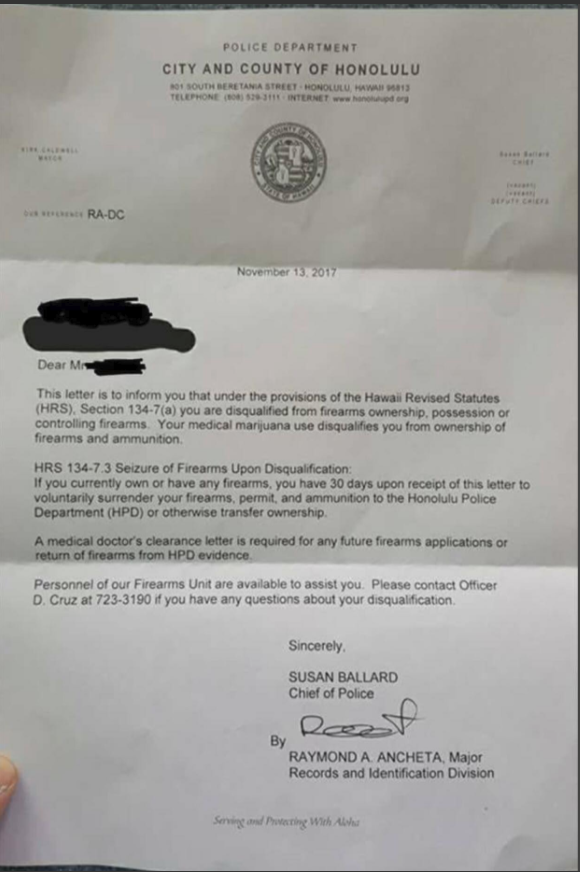 The letter claimed “a medical doctor’s clearance letter is required for any future firearms applications or returns of firearms from HPD evidence.”

U.S. Court of Appeals for the Ninth Circuit ruled that a ban on gun ownership for medical marijuana users is constitutional.

According to the court, marijuana use remains illegal on the federal level, even if a state exercises the 10th Amendment against the DC beast, but they fail to argue from a position of the Fifth Amendment’s protections regarding this.

Form 4473 asks if the would-be firearm purchaser is “an unlawful user of…marijuana.” No one who answers “yes” to that question can purchase a gun.

That’s all fine and dandy, but what about those who have already purchased and own their gun?  They aren’t having to answer diddly squat.  Furthermore, if government was actually engaging in the job they are supposed to be engaging in, which is protecting the rights of the people and bringing justice upon evildoers (Roman 13:1-5), then maybe, just maybe violent criminals would be put out of this world through the death penalty and the nonsensical laws we have against plants would be reversed.

Keep in mind those drug laws that so many neo-cons push are nothing more than a means to take your money, engage in no-knock searched and seizures and have resulted in billions of dollars being spent which has only helped to facilitate the black market, enrich those selling marijuana and result in far more dead than marijuana will ever bring about.

This is why the drug war must end and this is only a few examples.

Cannabis has been legalized in 29 states and Washington, DC.  Still, in 2011,  the Bureau of Alcohol, Tobacco and Firearms sent a letter to all firearms licensees stating that even if individuals have state-issued medical cannabis cards, it is still illegal for them to own firearms because cannabis is still a Schedule I substance under federal law:

“Any person who uses or is addicted to marijuana, regardless of whether his or her State has passed legislation authorizing marijuana use for medicinal purposes, is an unlawful user of or addicted to a controlled substance, and is prohibited by Federal law from possessing firearms and ammunition.”

Absolutely incredible how the central government assumes authority never given to it and rides roughshod over the Tenth Amendment.

However, we know they are doing it because of big money from Big Pharma because cannabis has been used to treat cancer, autism, and a variety of other health issues, including treatment of PTSD for our veterans.

Funny, the same government wants you to trust them as to how to manage your healthcare.

It’s interesting how government claims cannabis is not medicine but holds the patent on it, isn’t it?  What does that tell you?

One thing we know for sure is the feds don’t even prosecute people who lie on those ATF forms, or they do only rarely, but how dare you own a gun and use marijuana, even with the permission of the state beast and own a weapon!

Susan Ballard is going beyond the law and taking the law into her own hands.  She’s about as un-American as one can get.

President Trump Warns Iran: We Have 52 Iranian Targets Picked Out Already If You Attack Us

Why & How Does Racism Still Exist?

Why & How Does Racism Still Exist?