Some say that the mysterious granite structures in Elbert County, Georgia were put there by members of the sustainable development movement. Others say they’re guidelines for the what the elite members of society plan to do with the world in the near future. Wherever they came from, the Georgia Guidestones as they are called, have been the topic of much controversy and conspiracy theory over the last 35 years.

Originally built in 1979 by an unknown individual, the Guidestones outline ten principles, or guidelines, for how humanity is supposed to live and be governed on planet Earth.

For those who believe that the Guidestones may be a warning of globalization and a coming New World Order, the very first message may be the most controversial. “Maintain humanity under 500,000,000 in perpetual balance with nature,” it reads, leaving many wondering if the stones’ messages are merely suggestions, or perhaps something more sinister. The other guidelines don’t fair much better, with several calling for a centralized global governing body, a world court, and a unified social order.

That no one knows who built the stones or why is in and of itself a mystery for the ages. But now, according to reports from individuals who recently visited the Stones, they have been updated with a new message, perhaps even more cryptic than the stones themselves. Apparently, without much fanfare, a new corner stone has been added and it depicts the number “2014.”

The slab that was updated with the “2014″ has the guidelines written in English on one side and Spanish on the other: 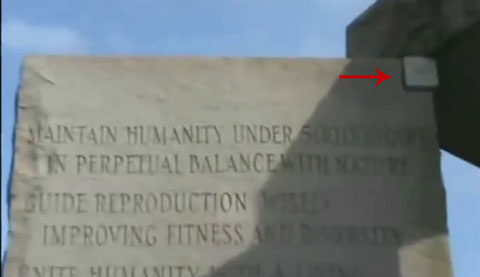 (Note: This image has been enhanced with brightness for easier viewing)

The 10 Principles of the Georgia Guidestones:

Naturally, conspiracy theories about who put the newly discoverted corner piece on the Guidestones abound.

If this is someone playing a joke, then they’ve certainly gotten everyone’s attention.

But, if it has been placed by the same person or organization who commissioned the Stones to begin with, then it’s quite possible that we are on the cusp of massive changes coming to the world starting this year.

To achieve success with even the first principle would require quite an event. In fact, other than a global nuclear war or natural catastrophe of biblical proportions, there’s not much that can reduce the human population from it’s current 7.2 billion people to 500 million in the span of the next few months.

But, that doesn’t mean the “2014″ message is meaningless. Assuming elite insider Lindsey Williams is correct in his suggestion that the elite or Illuminati often telegraph their intentions, and that the Guidestones were built by these shadow elite individuals or conglomerates, could it be that this year is the beginning of whatever agenda they purport to foretell?

Is this merely a hoax? Or has the convergence to a New World Order begun?

ATF to Fast and Furious Whistleblower: Publish Your Book After We Censor It