Haitian Human Trafficking Connection To US

“Human trafficking is a modern form of the oldest and most barbaric type of exploitation. It has no place in our world.” – President Trump

The 2007 documentary The Price of Sugar, narrated by Paul Newman, exposed how Haitians are lured into indentured servitude on sugar plantations in the Dominican Republic, never to return home. They can barely feed themselves or their families and their documents are stripped upon arrival so they can never leave the plantation. Cutting cane by machete, they work 14 hour days, 7 days a week, frequently without access to decent housing, electricity, clean water, education, healthcare or adequate nutrition. Instead of cash, they are paid in vouchers that can be redeemed for overpriced food at company-owned stores on the plantation. Since they can only afford one meal a day, most of the calories they consume come from chewing sugar cane and they suffer malnutrition. Aside from the Vicini family owning the Dominican Republic with a couple of other “elite families”, what allows this business to thrive and be so lucrative?

The Obama administration implemented a deal whereby the U.S. is paying the largest tariff rate on imported sugar at 85% to the Dominican Republic, and they are receiving the largest single-country allocation under the U.S. Tariff Rate Quota (TRQ) on imports. Translation: The Dominican Republic relies on the U.S. more than any other country for it’s sugar production, while receiving a sweet 85% tariff out the gate. The Dominican Republic is the fourth largest importer of sugar to the United States of America. This was a phase out plan that wraps up in 2020 when the tariff rate reduces to zero.

Why did the Obama Administration single out the Dominican Republic and extend such a substantial deal to them? Was there pay-to-play action involved? Why are we going above and beyond to continually support the trafficking and slavery of humans? If they rely so strongly on the U.S., shouldn’t routine inspections be done to be certain these people are earning what they deserve, are fed, are sheltered, have medical staff, and above all be allowed to leave WITH their papers they arrived with? 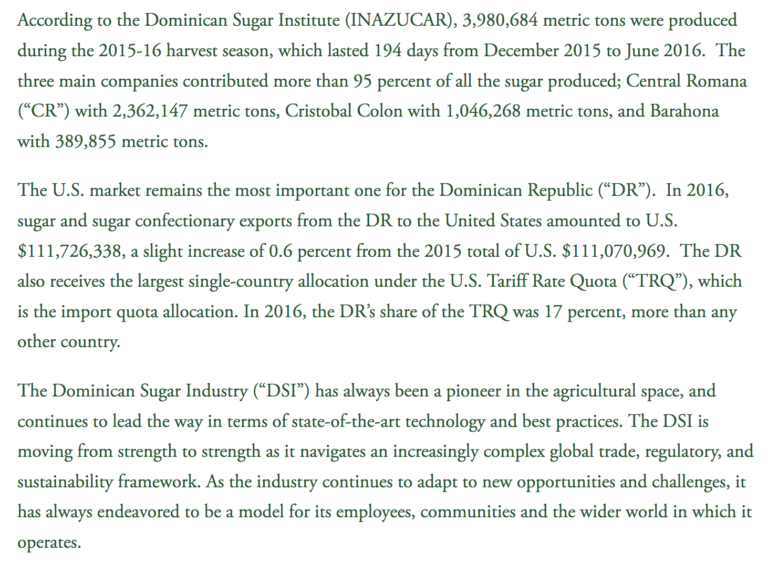 “As the industry continues to adapt to new opportunities and challenges, it has always endeavored to be a model for its employees, communities and the wider world in which it operates.”

Did they really just make that claim? 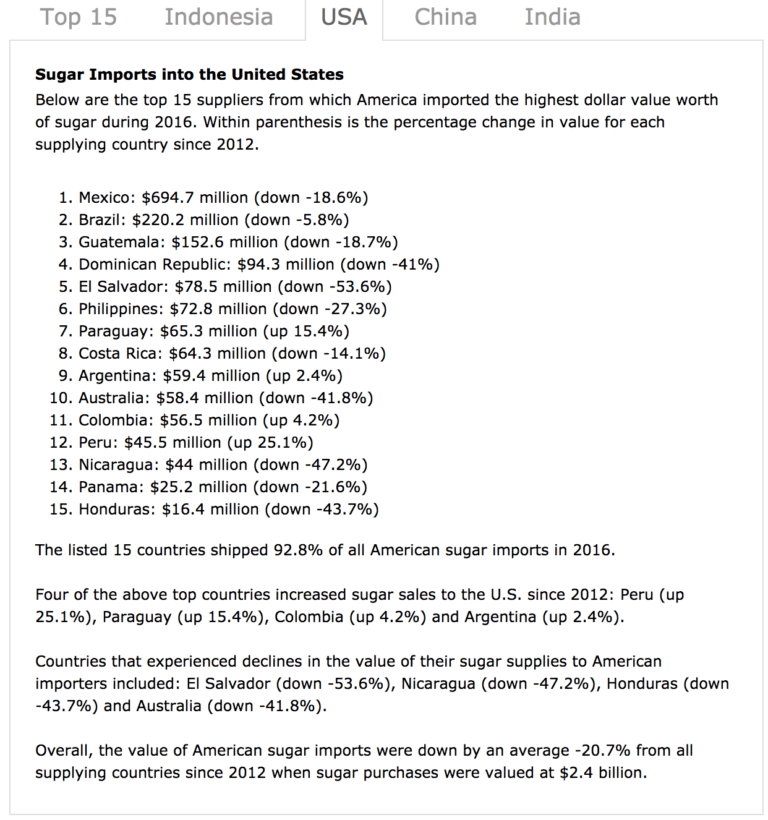 Equal Times did a follow up report in 2015 on some of the retired employees of the plantations. Here is just one story of many similar stories:

Leonor Mesille has spent most of his life bent over cutting sugar cane.

In 1947, he left Haiti for the Dominican Republic seeking food, money and opportunity. He ended up earning US $50 a month working on a plantation that exported most of its sugar to the United States.

At 71, he lives in a modest wooden structure with a tin roof. He has no retirement savings.

Over the past 19 years, Mesille has submitted the required paperwork on three separate occasions to collect his pension, which he says is owed to him for the 56 years paid into the social security system, a majority of which was spent working for Central Romana company.

Mesille said if he was granted a pension, he would collect an estimated US $100 per month, enough for food and access to healthcare. He blames government bureaucracy.

Between 8,000 and 10,000 sugar cane workers, the majority of which are Haitian immigrants, are still waiting for their pensions in the Dominican Republic, according to the Scalabriniana Association for the Service of Human Mobility, ASCALA, a local human rights organisation that focuses on immigrant rights, and the National Commission for Human Rights, CNDH.

Many are undereducated, undocumented immigrants struggling to navigate government bureaucracy, well-known for out-dated record-keeping. Others have struggled to prove that they are eligible for a pension because, like Mesille, they worked most of their lives undocumented.

The pension process paints a picture of the confusing way in which the Dominican system works, especially for Haitian immigrants.

On a recent afternoon, he recalled how he left his home five decades ago without saying goodbye to his family. “I thought I would come back after working and making lots of money and tell them then,” he said.

He never imagined he’d be sitting in his home counting beans for his next meal, hoping someone would bring him more food.

Labour activists say that many of the ageing former workers were lured to the Dominican Republic and ended up in jobs that rivalled slavery. As they’ve grown too old to work, the government has tried to deport some of them back to Haiti, but the retirees are fighting to stay in hopes that they can collect the pensions.

If you have not yet seen The Price of Sugar, I highly recommend it. The Vicini family, owners of the 250,000 acre sugar plantation shown in this documentary, take pages right out of the George Soros playbook of paying off protestors to remove the incredible Father Christopher Hartley from trying to help the Haitians. The parallels to how the elite and the MSM manage the situation to bolster their agenda is eerily familiar. It is quite an eye-opener for how slave labor is created, managed, and supported.

Human trafficking is so prevalent in these areas that a report was done back in 2004 titled “The Uses of Children: A Study of Trafficking in Haitian Children“. There have also been allegations that some of the children from Haiti were trafficked to the U.S. shortly after the major earthquake in 2010. And as recent as 2016-2017 there was a major 138%  increase in Haitians flowing into Chile with the hope of finding work and safety. Just the other day, another source confirmed to me that young girls are being flown from Venezuela to the Dominican Republic, stripped of their papers, and turned into sex slaves. There are people orchestrating this at the deepest levels of corruption while hiding in the shadows and turning human beings into slaves. All of this must be investigated and must be stopped! It’s barbaric!

(a)  strengthen enforcement of Federal law in order to thwart transnational criminal organizations and subsidiary organizations, including criminal gangs, cartels, racketeering organizations, and other groups engaged in illicit activities that present a threat to public safety and national security and that are related to, for example:

(i)    the illegal smuggling and trafficking of humans, drugs or other substances, wildlife, and weapons;

(iii)  the illegal concealment or transfer of proceeds derived from such illicit activities.

This will give law enforcement and victims new tools to fight sex trafficking.

“We are going to do everything in our power to make sure traffickers are brought to a swift and firm justice…When we work together, we can bring safety and hope to every community across the country.” – President Trump

Mr President – I know how near and dear this topic is to your heart, and I’ve observed how you have gone above and beyond to stop human trafficking in our country. I call on you now to please take action to stop the human trafficking and slavery taking place in our allied countries we do business with. This barbaric exploitation must stop throughout our entire world for it to resolve. Oversight is required in the Dominican Republic, and the people of Haiti need our assistance from the monopoly of corruption the Clintons have manufactured and continue to run, leaving most Haitians with no work, no safety, and nowhere to turn for help.

“Human trafficking has no place in our world.”