We were informed that Barack Obama signed up for a bronze insurance plan under Obamacare over the weekend, using the Healthcare.gov website. April Ryan, the White House correspondent and Washington bureau chief for American Urban Radio Networks, tweeted out the news, but then there came an uneasy admission.

President Obama signed up for insurance and selected the Bronze plan for health insurance over the weekend while on vacation.

“President Obama signed up for insurance and selected the Bronze plan for health insurance over the weekend while on vacation,” Ryan tweeted.

The White House followed up Ryans’ tweet with this statement:

Over the weekend and in advance of today’s deadline, the President enrolled in a health care plan made available by the Affordable Care Act on the DC marketplace.    As you all know, the President is one of the 85 percent of Americans who gets his health insurance through his employer and, like previous Presidents, is privileged to receive health care from the military.  The act of the President signing up for insurance coverage through the DC exchange is symbolic since the President’s health care will continue to be provided by the military.  But, he was pleased to participate in a plan as a show of support for these marketplaces which are providing quality, affordable health care options to more than a million people.   The President selected a bronze plan.

Twitchy picked up on this and photoshopped this little bit of humor: 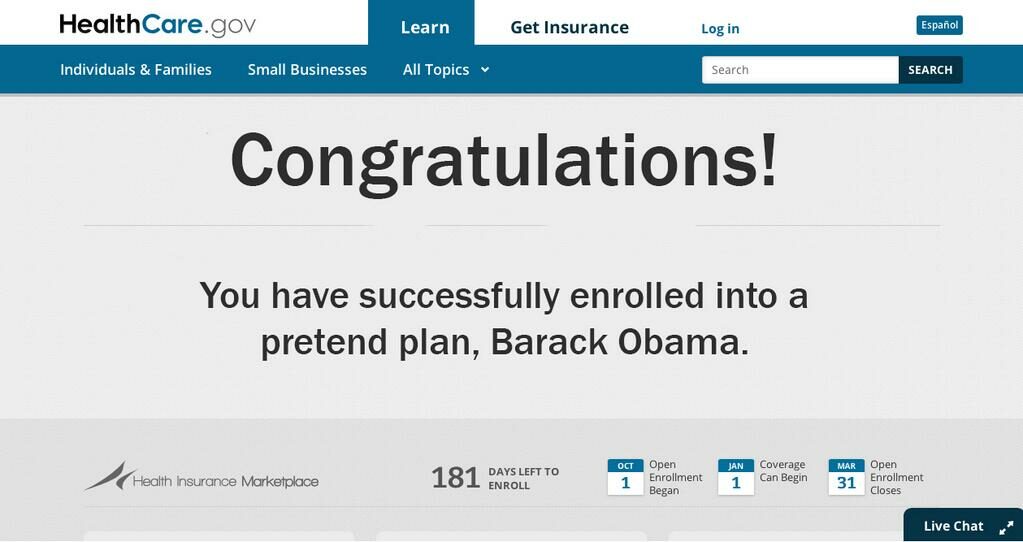 Since the sign up was “symbolic,” apparently meaning that Obama is not subject to the same laws that the rest of Americans are, the entire thing has taken a interesting twist. Fox News’ Ed Henry reported:

“We learned today from the White House. Initially, they said he signed up for what they called a bronze plan, paying about four hundred dollars a month in premiums. But, then they came back to us and said – Wait, he didn’t actually enroll. They said his staff did it and that’s because of his unique circumstance as Commander in Chief. That his personal information is not in particular government data bases. So healthcare.gov could not actually verify his identity, oddly enough. So, he had to do it in person this weekend, but he was in Hawaii, not in Washington. So he was signing up for the DC exchange. So his staff did it.”

This information comes as people are engaging the holidays with family and friends. While Obama doesn’t want you talking about his identity, he does want you talking to your family about Obamacare.

However, there are numerous questions that should be asked here. How does Obama vote if his data cannot be verified? We’ve all been asking how he can be president without verifying his data, which he has yet to actually produce for authentication (and no, an image on a website is not authentication). What is Henry talking about Obama needing to do his fake sign up “in person,…but he was in Hawaii, not Washington”? It’s a website. It’s accessible from Hawaii, just as it is in Washington.

In addition to these concerns, how is the Internal Revenue Service able to receive and verify Barack Obama’s tax returns? Why is one federal agency apparently able to verify him in this manner, but another is not? Since the IRS seems able to do so, while the Health and Human Services website cannot, Could this be tied to the IRS scandal?

How is Chicago able to verify Barack Obama as a voter?

Furthermore, there remains the questions surrounding Obama’s alias, Barry Soetoro, which was used to register to vote in Washington, DC. After several reports on the voter registration, it mysteriously disappeared from the DC Election Board’s website within ten days without explanation. Interestingly enough, the DC Election Board denied a Freedom of Information Request regarding this matter.

This does cause one to wonder if the system might not authenticate Obama due to the claims that he uses Harry Bounel’s Social Security number.

Yet Another ‘Anti-Sodomite’ Hate Crime Was a Big Hoax