While people like writer Dean Obeidallah over at The Daily Beast are calling for “political hardball” in regard to gun control, writing, “Anyone else tired of the same old bullshit we see after every gun-shooting spree?” and our congresspeople are busy introducing more anti-gun legislation every chance they get, yet another highly publicized mass shooting just occurred in Las Vegas.

The LA Times is reporting:

Five people were dead Sunday after a man and a woman ambushed two police officers at a Las Vegas pizzeria and then stormed a nearby WalMart, where police said they killed themselves after a gun battle with officers.

An unidentified woman, described as a WalMart customer, was also found dead inside the store just inside the door.

No motive for the tag-team attack is known, police said, although witnesses said at least one of the suspects shouted remarks about the arrival of a “revolution” and alluded to some kind of war.

Apparently one of the shooters, described as “a tall, thin, middle-aged white man in military-style clothing…with a small gun in his hand,” entered the Walmart shouting, “The revolution is about to start.”

This now makes four highly publicized shootings in the last two weeks, including those in Georgia, Seattle, and Santa Barbara, California.

People who share Obeidallah’s sentiment are banging the anti-gun drums as furiously as they can at this point.“It’s the real world where over 30 people are murdered with guns every day in the United States,” he wrote earlier today, admonishing politicians for not doing enough to halt the public’s gun access and generally painting people who stand up for the 2nd Amendment as cold, heartless bastards who care more about that gun access than a child’s life.

Never mind that he isn’t calling to ban, for random example, vehicles, which kill three times more people a year than the stat he cited. Nearly 35,000 motor-vehicle related deaths occurred in 2012 alone in this country.

Never mind that he isn’t calling to ban correctly prescribed, FDA-approved pharmaceuticals which kill on average more than 280 people a day in this country — more than 100,000 people a year and that is a conservative estimate. (Pharmaceuticals like the psychotropic variety featured in many of these mass shootings, including the recent ones in Santa Barbara (xanax), Georgia (alprazolam), and Seattle (prozac and risperdal), by the way.)

Never mind that a gun by itself can’t kill a person anyway. A gun kills someone when in the hands of a criminal who chooses to use it illegally. That’s because a criminal is not someone who follows laws.

(Yes, it really is that simple.)

Check out the picture from the LA Times story I mentioned above. Here’s a screen cap for critical analysis purposes:

These two guys are what the police look like in our country now.

It leaves you asking yourself what the hell happened in this country. 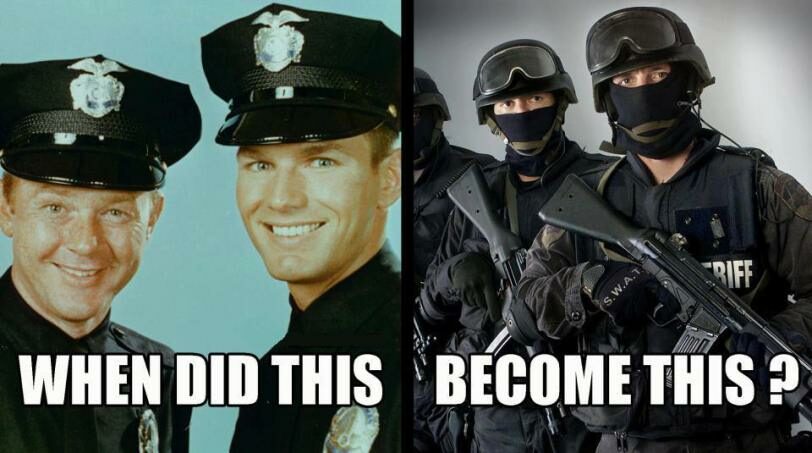 These officers look nothing like the quintessential cops of yesteryear. That’s because the American Barney Fifes of 50 years ago no longer exist.

Now our police are more like camouflaged soldiers straight off the battlefield in Afghanistan.

The only difference is that little yellow word “police” emblazoned on the back of the guy on the left. If his back didn’t say that, the average citizen might not even realize these guys were police.

If we take away guns from the citizens, the only people left who will have those guns are America’s now highly militarized police (state) officers like those in the picture above and, because again they do not follow laws, criminals who will still get them regardless of laws (the same way they do now).

Obeidallah is now calling for an all-out rewriting of the 2nd Amendment to the Constitution of the United States:

I’m not saying repeal it, but take a page from the pro-gun lobby who for 20-plus years preached, wrote academic papers, held seminars, etc., to support the then-radical notion that the Second Amendment bestowed a personal right to own a gun, thus making it more challenging to enact laws that restrict access to them. Of course, the Second Amendment says no such thing. (source)

Quick history lesson. When the founding fathers wrote the 2nd Amendment, what were they ultimately trying to protect people from anyway?

A random crazy person who shoots up a public place in such a manner that no amount of laws could have possibly stopped it anyway because if someone wants to hurt a whole bunch of people that badly, he or she will find a way?

The founding fathers were ultimately concerned with an oppressive, runaway tyrannical government — something all these anti-gun arguments consistently fail to mention.

*UPDATE: Before we go rewriting the 2nd Amendment, consider this*
The Las Vegas Review-Journal is currently reporting, “One unconfirmed report is that the two exchanged gunfire with a citizen who was carrying a concealed weapon, and that one of the shooters was injured.” [emphasis added]