Hey Lefties! LA Riots are an Example Of The Need For "Assault Rifles"

OK, I used the term “assault rifles” in the title to get your attention. Now let me explain that I do not believe they are assault rifles. They are merely rifles capable firing many rounds quickly. The Left gun control crowd has been saying that there is no need for these kinds of weapons, but my friends nothing could be further from the truth and I want to share with you just one instance that everyone should be able to understand just how needy these weapons are.

The year was 1992, twenty years ago, when following a jury trial, four Los Angeles Police Department officers were acquitted, in April, after being accused in the video recorded beating of a black American named Rodney King.

As a result, people throughout the Los Angeles metropolitan area rioted over six days because of the verdict. They engaged in widespread looting, assault, arson, and even murder. The damage these criminals caused was well over $1 billion!

The rioting finally came to a halt after the California National Guard, along with U.S. Marines from Camp Pendleton were called in to help stop them.

During the riots, more than 60 people were killed and over 4,000 were injured.

On April 30, the second day of the riots, Korean-Americans saw the police fall back from Koreatown, leaving them to defend themselves in the midst of heavy looting and fires. A store owner at the time, Jay Rhee, told the Los Angeles Times, “we have lost faith in the police.”

In the shadow of a flaming mini-mall near the corner of 5th and Western, behind a barricade of luxury sedans and battered grocery trucks, they built Firebase Koreatown.

Richard Rhee, owner of the supermarket on the corner, had watched as roving bands of looters ransacked and burned Korean-owned businesses on virtually every block.

But here, it would be different.

“Burn this down after 33 years?” asked Rhee, a survivor of the Korean War, the Watts riots and three decades of business in Los Angeles. “They don’t know how hard I’ve worked. This is my market and I’m going to protect it.”

From the rooftop of his supermarket, a group of Koreans armed with shotguns and automatic weapons peered onto the smoky streets. Scores of others, carrying steel pipes, pistols and automatic rifles, paced through the darkened parking lot in anticipation of an assault by looters.

From tiny liquor stores in South-Central Los Angeles to the upscale boutiques in Mid-Wilshire, Korean store owners have turned their pastel-colored mini-malls into fortresses against the looter’s tide.

For many store owners, the riots have become a watershed in the struggle for the survival of their community.

The store owners shot off at least 500 rounds into the sky and ground to break up masses of people that were looting. They could have only accomplished that with the types of weapons they were using.

By the end of that first day of defending themselves, they have killed four looters and beat back the mob that had moved into their area. 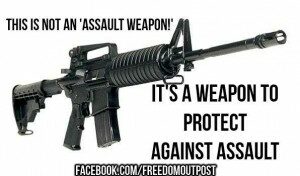 Though they desperately tried to get the police to respond, even asking “Where were you when we needed you?” police would not show up for another 24 hours. Additionally, it was reported that 200 police uniforms had been stolen and according to a Korean radio announcer at the time, “We cannot trust a person just because they are wearing a uniform.”

Eventually things were brought under control. However, understand that the Clinton signed “assault weapons ban” was just two years later. Imagine if that had been in place when the rioting took place. It is highly possible that many of these Korean-Americans would not have been able to defend themselves, their property or their families and obviously the police were not very effective.

So I ask those who may read this article who are in favor of gun bans, more gun laws, and simply more control, are you willing to simply stand for government telling you how you can and cannot defend yourself, your family and your property? You better think this through before you go calling for it. After all, if the police in LA will abandon the people of Koreatown, what makes you think they won’t leave you to fend for yourself should something similar take place in your neighborhood?