Hillary Clinton Funnels $800,000 to Her Political Group That Funds ANTIFA

If you recall, then-presidential candidate Hillary Clinton was one that was always talking about money in politics while hypocritically soliciting donations from some of the world’s most corrupt people and organizations.

Now, it’s come to light that Clinton apparently funneled over $800,000 from her campaign money to her new political PAC, Onward Together, which is backing several groups of resistance against the current administration, including ANTIFA.

As a presidential candidate, Clinton railed against “dark money” groups like Onward Together.

Clinton transferred$800,000 from her failed 2016 presidential campaign to Onward Together shortly before announcing the group’s launch in May, documents the campaign filed with the FEC reveal.

Clinton doesn’t even deny that she is supporting such groups.

In an email signed by her that went out last week asking for money, Clinton wrote, “You may not have heard much about the work we’re doing at Onward Together,” Clinton wrote. “That’s because we’re working behind the scene to fund, support, and amplify the work of the groups we’re supporting. We’re not the story: they are.” 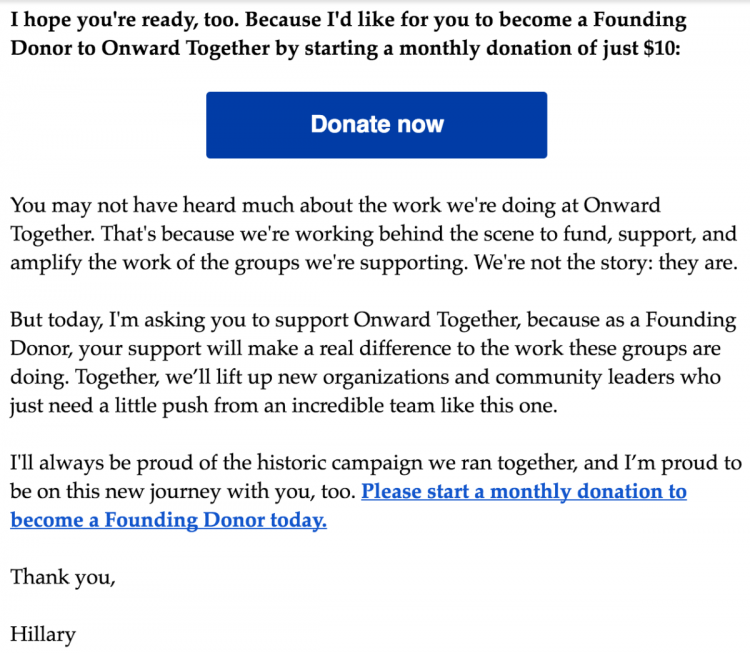 Each of five political groups that were mentioned were contacted by The Daily Caller and asked if they were being funded and supported by Onward Together.

Out of those five, only one group, the Soros-backed Indivisible, responded.

“Onward Together has not given any financial support to us,” Helen Kalla, an Indivisible spokesperson, wrote in an email.

Kalla added that Clinton’s group has “been amplifying and highlighting our work through their digital networks,” which she explained has consisted of “retweeting [Indivisible], and they’ve highlighted our work via their emails to their list too.”

Onward Together is not required to reveal donors’ identity as a 501(c)4 “social welfare” organization.

The group also will not be revealing those identities, something that is only occurring to protect the guilty.

Meanwhile, because the Trump administration did not keep its promise to investigate and seek prosecution of Mrs. Clinton, she is freely promoting her blame book, What Happened, and now she is funding the little Communists known as ANTIFA, which are working against the administration and against the very heart and soul of American culture and history.

But we can’t do anything about the Clintons because they are really good people, right Mr. President?