For all the talk about Trump colluding with the Russians, something that has now been thoroughly discredited, many have forgotten that Russian collusion has indeed been going on. Only it’s been done by the Clintons. And a new WikiLeaks cable shows that in addition to the ‘Uranium One’ deal that resulted in Russian control of 20% of our uranium and millions flowing to the Clinton Foundation, Hillary Clinton in her capacity as Secretary of State, has also conducted similar under the table deals, and guess who else was involved? That’s right; special counsel Robert Mueller. You can’t even make this stuff up!

In the following video, Today’s Yellow Snow (formerly Right Wing News) looks at the details of the leaked cable, which involved Clinton’s secret directive to then-FBI Director Robert Mueller to discreetly return confiscated highly enriched uranium to the Russians. The uranium had been confiscated in a nuclear smuggling sting operation in Georgia. Interestingly, the handover between Mueller and the Russians happened on an airport tarmac; does this sound familiar to anyone?

Authored by Shepard Ambellas via Intellihub.com,

So-called “background” information was provided in the cable which gave vague details on a 2006 nuclear smuggling sting operation in which the U.S. government took possession of some HEU previously owned by the Russians.

“Over two years ago Russia requested a ten-gram sample of highly enriched uranium (HEU) seized in early 2006 in Georgia during a nuclear smuggling sting operation involving one Russian national and several Georgian accomplices.  The seized HEU was transferred to U.S. custody and is being held at a secure DOE facility.”

The secret “action request,” dated Aug. 17, 2009, was sent out by Secretary of State Clinton and was addressed to the United States Ambassador to Georgia Embassy Tbilisi, the Russian Embassy, and Ambassador John Beyrle. 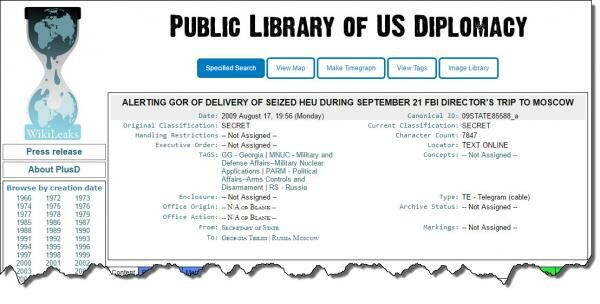 It proposed that FBI Director Robert Mueller be the one that personally conduct the transfer a 10-gram sample of HEU to Russian law enforcement sources during a secret “plane-side” meeting on a “tarmac” in the early fall of 2009.

“We require that the transfer of this material be conducted at the airport, on the tarmac nearby the plane, upon arrival of the Director’s aircraft.”

The FBI Director was originally scheduled to ‘return’ a sample from the DOE stockpile to the Russians in April but the trip was postponed until September 21.

“(S/Rel Russia) Action request: Embassy Moscow is requested to alert at the highest appropriate level the Russian Federation that FBI Director Mueller plans to deliver the HEU sample once he arrives to Moscow on September 21. Post is requested to convey information in paragraph 5 with regard to chain of custody, and to request details on Russian Federation’s plan for picking up the material. Embassy is also requested to reconfirm the April 16 understanding from the FSB verbally that we will have no problem with the Russian Ministry of Aviation concerning Mueller’s September 21 flight clearance.”

But possibly even more shocking is the fact that the State Department wanted the transfer of the HEU to take place on an “airport tarmac” which is rather reminiscent of the infamous Loretta Lynch/Bill Clinton meeting which occurred on a Phoenix, Arizona, tarmac back in June of 2016.

Past dealings with the Russians were also mentioned in the cable, signifying that previous deals have taken place.