Hillary Is Busted: Read The Real Booklet Hillary’s Man Was Carrying For Years. It Was The Muslim Shari’ah Constitution And NOT The U.S Constitution

Khizr Muazzam Khan’s photo carrying a booklet of the U.S. Constitution made him a celebrity to millions of bleeding liberal hearts. While Khan never once wrote complementing the U.S. Constitution until Trump, instead, in his booklet, The Sharia Explained (we copied shocking excerpts) of what the media failed to vet:  Khan’s real booklet clearly upholds Shari’ah while denouncing any other, including any modern reforms to Islam. He concludes that Sharia should be “upheld in its original form” and that it has “no room for change,” insisting that Muslims worldwide must be “subordinated to the Shari’ah”:

“they [Muslims] must always be subordinated to the Shari’ah” (Shari’ah Explained. By Khizr Muazzam Khan, Page 25) 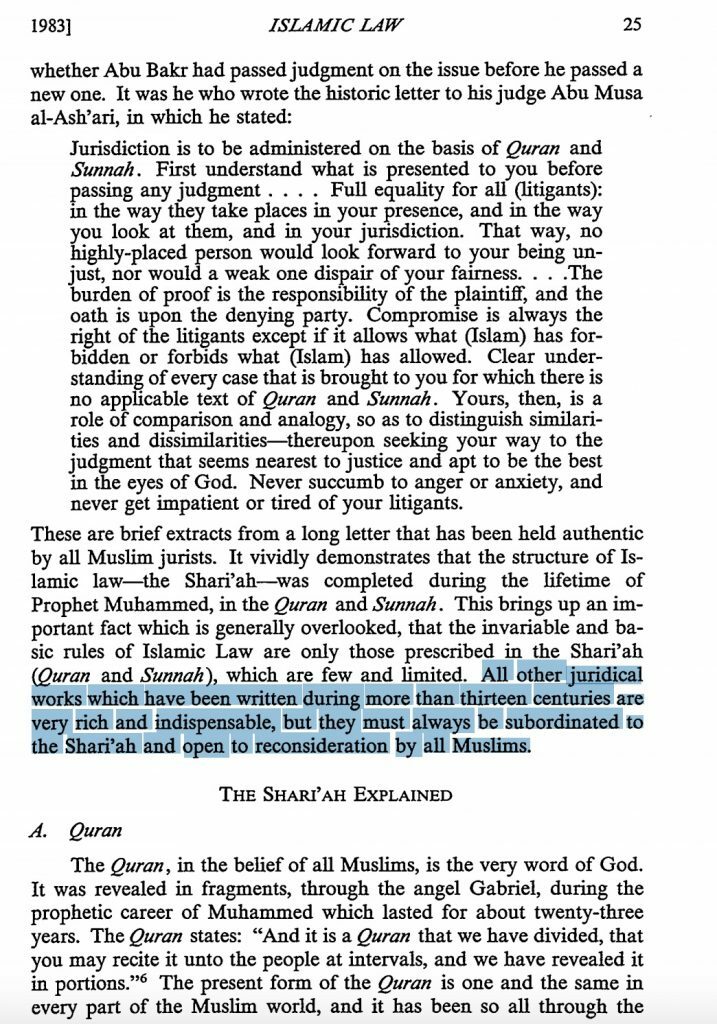 So lets see the quote:

“The Shari’ah-was completed during the lifetime of Prophet Muhammed, in the Quran and Sunnah. This brings up an important fact which is generally overlooked, that the invariable and basic rules of Islamic Law are only those prescribed in the Shari’ah (Quran and Sunnah), which are few and limited,” Khan continues to write: “All other juridical works which have been written during more than thirteen centuries are very rich and indispensable, but they must always be subordinated to the Shari’ah and open to reconsideration by all Muslims.”

That’s it. There is no room for any modernization to Islam’s Shari’ah law. It is as clear as the sun. Khan even sums it up:

“to Muslims, the Quran being the very word of God, it is the absolute authority from which springs the very conception of legality and every legal obligation.”

Khan then jumps to instruct Muslims to use Al-Muwatta, the oldest book on Islamic Shari’ah law, written by Muwatta Imam Malik “to bring about legal uniformity in the Muslim nation”: 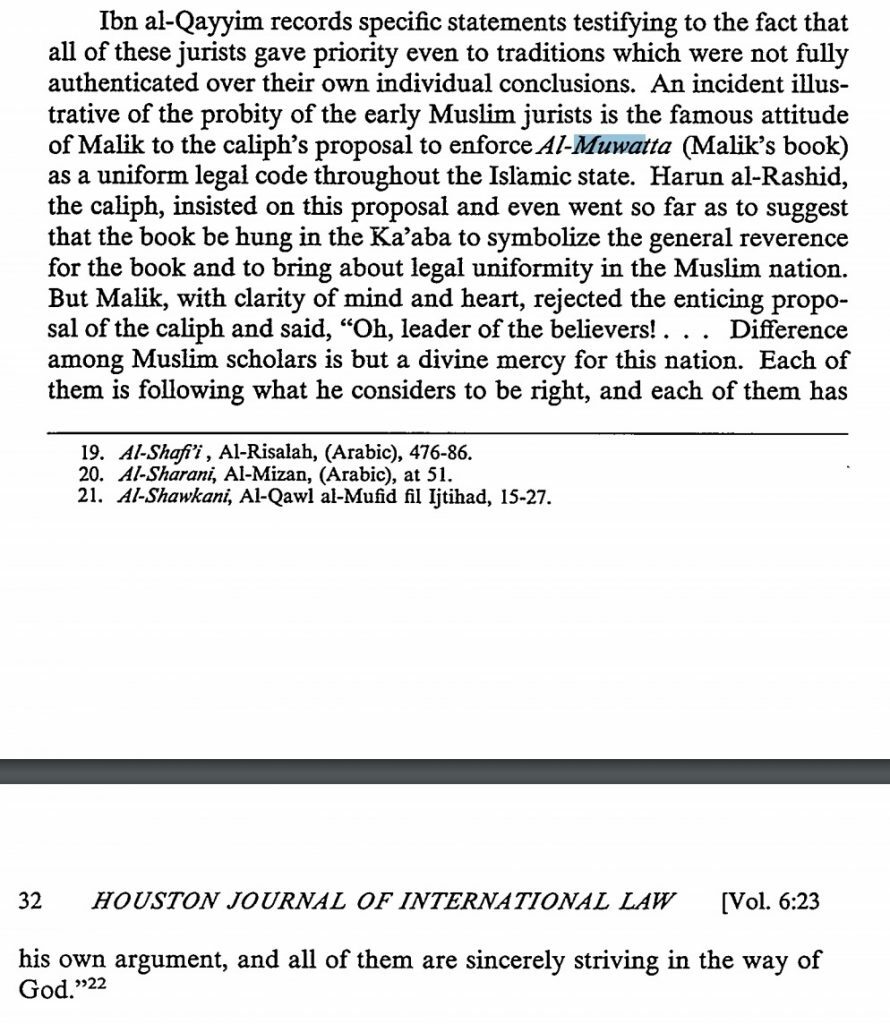 So how awful is Al-Muwatta? Here, see for yourself the litany of Al-Muatta’s calls for Jihad: 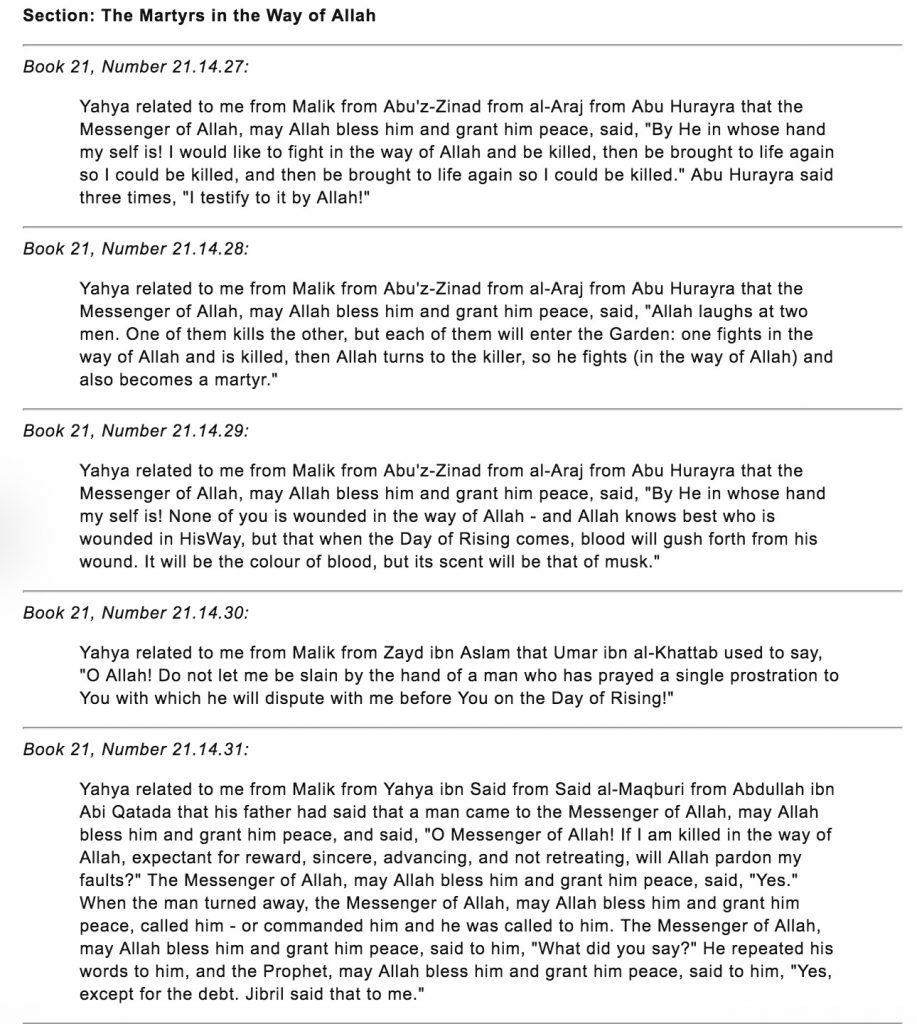 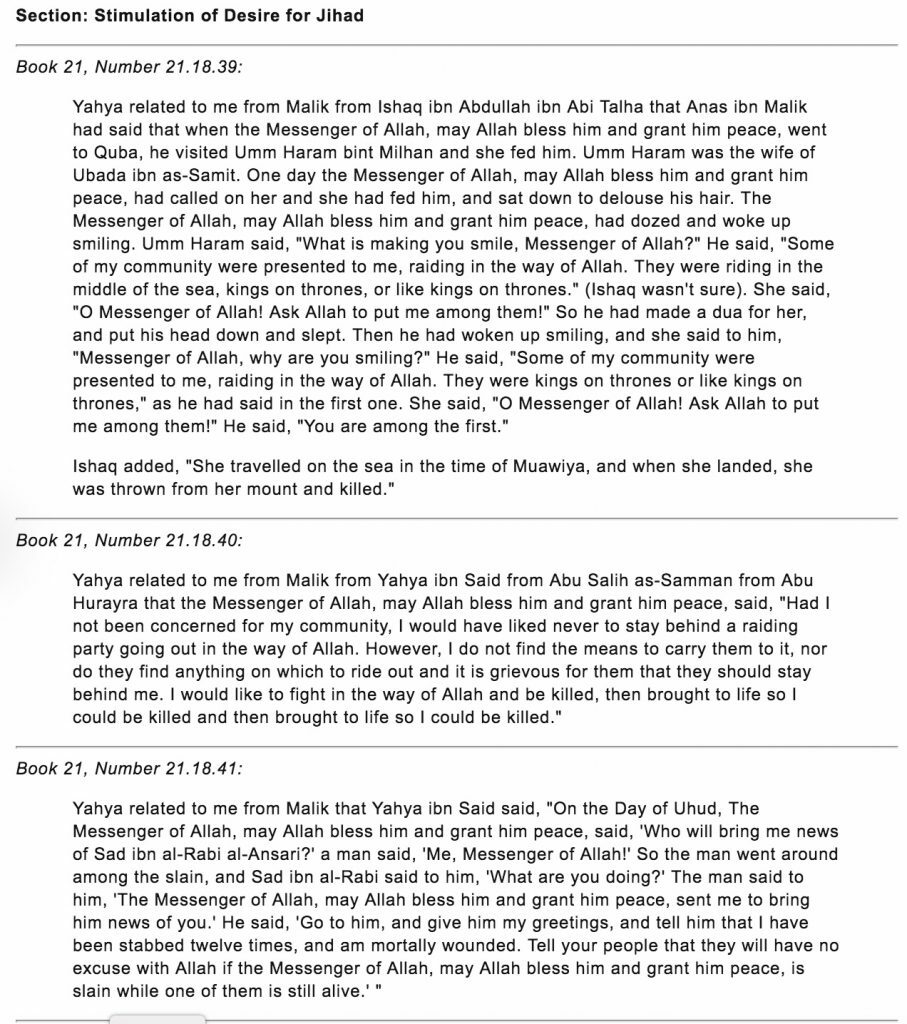 This is not an eye-full for all the bleeding hearts?

Okay then, so let’s see. Khan then insists that no “new source of legislation” should ever replace Shari’ah. This would include the U.S. Constitution he supposedly upheld for photo ops. He states that Shari’ah “vividly demonstrates that the structure of Islamic law–the Shari’ah–was completed during the lifetime of the Prophet Muhammad, in the Quran and the Sunnah“:

This is not enough to convince? How about Khan’s recommendation for Muslims to use Al-Wathaiq Al-Siyasiyah (Islam’s Political Documents) by Dr. M. Hamidullah, which records 250 documents that includes Jihad in Islam amongst all ‘other things Shari’ah’.

A search on Al-Wathaiq Al-Siyasiyah from the Arabic would yield a library upholding the most violent forms of Jihad.

Al-Wathaiq Al-Siyasiyah includes several instructions on how to carry out Jihad warfare. One excerpt (snippet from Arabic above) states:

“What was said on the proclamation on Jihad warfare amongst Islamist writers … Many Islamist consider this subject. They spoke of Islamic conquests andthe reason it spread and succeeded in lightening speed. What is important to us are the reasons for declaring Jihad along the Islamic borders or inprovinces where the enemy was crushed which expanded due to Jihad movement which included all fronts“

Khan’s conclusion is that Shari’ah needs to stick to its fundamental form “Usul Al-Shari’ah,”  arguing that it should not be fixed, that it has no room for any wiggle, and that Muslims need to trust and fully obey it. Khan, in his intro, sends special thanks to Said Ramadan, the grandson of Hassan Al-Bana, the godfather of the Muslim Brotherhood:

“The contribution to this article of S. Ramadan’s writing is gratefully acknowledged.”

As to all the liberal media reports that attacked my bio instead of addressing our research saying I was “a fraud” because CNN’s Drew Griffin stated that “NO BOMBS” exploded in “Bethlehem MANGER SQUARE” in 1977 when I was a Muslim terrorist. Well, here, the United Nations own records reveal the opposite is true.

The most damaging to CNN’s Mr. Griffin’s story is that, according to the U.N, there was a bombing at the Bank Leumi in Bethlehem’s Manger Square — as I described. In fact, between December 24 and 27, there were two explosions in that area: “Bethlehem (in Manger Square near the Church of the Nativity)” and “Explosive charge went off outside the local Courthouse 27 December 1977 JP. 2 Jan. 1978 Yediot Aharonot, 2 January 1978.”

The ironic thing is that CNN obtained this error from the Jerusalem Post. Yet it was the Jerusalem Post which published the article of my bombing during 1977, as one can see from the link. The Jerusalem Post regretted publishing the initial smear article, allowing me to write a rebuttal for failing to look up their own records. Yet, CNN picked up the smear, and now it trickles downward while Sharia-loving Muslims trickle upwards, showing that when it comes vetting, the sewage uses Osmosis. Khan is the story here and not Shoebat. After our expose, Khan now refuses to appear on the media. Why? It is because, to Khan, it is  “mission accomplished,” since the more he appears, the more vetting is required? Yet, Khan and Hillary are both busted.

Yet, is is us now whom they attack. The Daily Beast, for example, thrashed us; but, low and behold, they have used us as consultants for fact discovery on their story on Hillary and Benghazi. M.L Nestel of the Daily Beast, with permission from his supervisors, has been conducting investigations using yours truly for an entire year. Matthew Nestel of the Daily Beast even accepted all the vetting I provided of myself, and I have all the emails to prove it. I will not, however, disclose the contents, since I try to follow certain ethics of integrity:

Katie Zavadski of the Daily Beast, in fact, contacted me yesterday with smear types of questions. Instead of waiting for me to respond, she published. I responded to her with: