Hillary Rodham “What Difference Does It Make” Clinton is scheduled to receive the American Patriot Award at the National Defense University’s 2013 Gala at the Ronald Reagan Building and International Trade Center in Washington, D.C. this November.

Clearly this is nothing more than a political move by the NDU. After all the NDU is under the direction not only of its chairman, but also the Joint Chiefs of Staff under Barack Obama.

According to the NDU, “The American Patriot Award recognizes men and women of extraordinary caliber whose leadership has strengthened our nation’s strategic interests and advanced global security.”

“As First Lady, Senator, and Secretary of State, Hillary Rodham Clinton tirelessly worked to support and defend our nation and our allies around the world,” said Al Zimmerman, chairman of the NDU Foundation Board of Directors, in a press release.

“Secretary Clinton will be the first woman to receive this award and in doing so joins an outstanding group of Americans who have been honored with the American Patriot Award, our very highest recognition,” Zimmerman continued in the release. “By honoring Secretary Clinton’s exemplary career in public service the NDU Foundation celebrates not only the American spirit of patriotism, but the leadership qualities necessary to preserve and protect that spirit.” 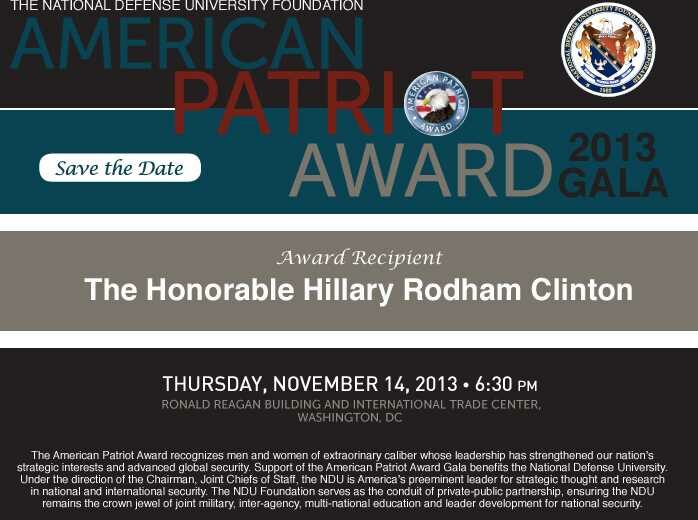 I guess no one informed the NDU that it was Mrs. Clinton’s decision to

not provide greater security to Ambassador Christopher Stevens in Benghazi, resulting in at least four dead Americans and dozens more injured. She then went on to spend taxpayer money to apologize to Pakistan for a video that had nothing to do with the attacks in Benghazi.

Did the NDU even bother to see that Clinton had placed members of Al-Qaeda in positions to provide security in Benghazi?

Possibly they overlooked the fact that Hillary Clinton has as her deputy assistant Huma Abedin, whose husband is a pig (can’t blame Hillary for that, since her husband is as well) and her family is directly tied to the Muslim Brotherhood and was called on it by several representatives, including Michele Bachmann.

She has also worked with the current administration in completely botching the wars in Afghanistan and Iraq, starting wars in Libya and currently trying to in Syria and Iran, along with aiding France in a war in Mali. She has been right in the middle of toppling governments in order to install Islamic regimes.

The administration she worked in cut health care for the military, fired countless military personnel and tied the hands of soldiers in the field leading to unprecedented casualties in Afghanistan.

No, the NDU knew all about this and then they have the audacity to refer to Clinton as a Patriot. They can do whatever they want with their award, but providing it to Clinton simply demonstrates how meaningless it really is.

Clinton is a woman that is no patriot. She doesn’t even love the United States in any regard. She is a radical communist under a Democrat label. There is no doubt this is merely a move to try and polish off the dirt on her for a run in 2016 for the White House.

The fact that we have come to this place in history where traitors and communists are considered patriots to America merely points out the decadence of our society.

Tim Geithner: 'I'm The Most F***ing Transparent Secretary In This Country's F***ing History!'

Tim Geithner: 'I'm The Most F***ing Transparent Secretary In This Country's F***ing History!'