Hillary Clinton’s long-time aide and campaign insider Huma Abedin may have inadvertently confirmed that Hillary Clinton’s mental and physical health are deteriorating. In a private email sent via Clinton’s unsecured server and released after a Freedom of Information request by Judicial Watch, Abedin exchanges emails with State Department aide Monica Hanley and notes that Hanley must go over material with Clinton because she is often confused.

On January 26, 2013, Abedin had the following email exchange with Hanley:

The emails also provide specific details of Clinton’s last day in office on January 31, 2013. Exact times and locations of all her appointments during the day are given.

“Huma Abedin’s description of Hillary Clinton as ‘easily confused’ tells you all you need to know why it took a federal lawsuit to get these government emails from Clinton’s illegal email server,” said Judicial Watch President Tom Fitton. “These emails also show that Hillary Clinton’s and Huma Abedin’s decision to use the Clinton email server to conduct government business was dangerous and risky.” 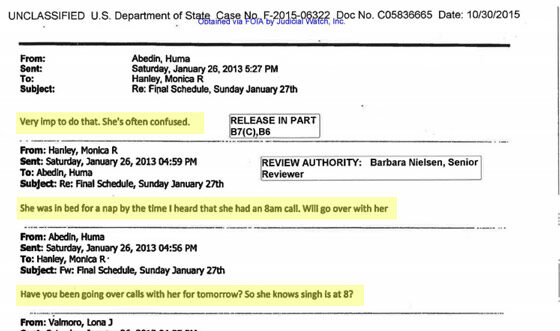 The email may, in part, explain Clinton’s recent bizarre behavior which some medical professionals say could be related to strokes or seizures, and may confirm that Hillary is unfit for the Presidency:

There’s the photograph of Secretary Clinton’s difficulty walking up some steps. Now inability to climb stairs does not necessarily disqualify a person for public office. However, neither she nor people with her apparently anticipated a problem. The people helping her seem to be preventing a fall. Did she simply trip? Or was it a seizure or a stroke?

Videos widely circulated on the internet are, if authentic, very concerning. One shows prolonged, inappropriate laughter; another, strange head movements. In a third, she appeared momentarily dazed and confused, and lost her train of thought.  Reportedly, she has a volcanic temper. (This is probably not new.)

A man who stays close to her, who is reportedly not a Secret Service officer, was photographed carrying something in his hand that purportedly might have been an autoinjector of Valium.

While we don’t have Mrs. Clinton’s medical records, it is widely stated that she experienced a fall that caused a concussion. Since then, she is sometimes seen wearing eyeglasses with prisms, as are used to correct double vision.

Is Hillary Clinton unfit to serve?

It appears that she may have lost some marbles, as evidenced by her latest “short circuit” this week:

And while we understand that candidates may misspeak or make mistakes, what we are witnessing here is someone who, especially in the face of loud crowds and camera flashes, looks puzzled, confused and detached:

Hillary Clinton has not yet released her medical records.

Now we know why.