Once again the political rhetoric in Washington is heating up, and if you listen to the mainstream media, you’ll hear all about how it’s not just people on the left who are constantly acting inappropriate or calling for violence. You’ll hear that the calls for violence or the abusive rhetoric has been a problem coming from both political parties, but the reality is that simply just is NOT true.

As a matter of fact, to even suggest such a thing is patently false, and anyone doing so knows damn well that it’s false! When it comes to the Democrats not getting their way, it’s always the same: They start with the personal attacks, then start telling outright lies if they have to, and when those don’t work, there are calls for violence. You can set your watch to it. With Democrats, that behavior is NOT the exception as they would have you believe. It’s the rule, and this week was no different…

In the following video, Right Wing News reviews the despicable behavior demonstrated by yet another Democrat this week, this one being Rep. Scott Hamann of Maine, and asks the viewer how much longer this nonsense will be allowed to go on before either the Trump administration, or the general public for that matter, will refuse to put up with it for one more minute.

At what point is someone going to decide to take matters into their own hands when it comes to dealing with an entire political party that simply refuses to accept the results of a lawful and democratically held election? It’s reaching a point where the words, the rhetoric, and the behavior of some of these Democrats is beginning to create legitimate geopolitical tensions, which could put millions of lives at risk?

Furthermore, be sure to read through to the end of this post. After the video with Dan Bongino, I present an option that if President Trump chose to employ, it would not only put an end to the insanity that’s been never-ending since he upset Hillary Clinton back in November, but it would be an unprecedented move in all of American history…

People may be upset about President Trump and his tweet, but have they seen how the Democrats are on Facebook and Twitter? It’s out of control.

Rep. Scott Hamann, an elected Democrat for the House of Representative in Maine, has publicly threatened President Trump’s life on social media with classless language.

Hamann said, “Well then f*ck you, snowflake. You’re a f*cking p*ssy…. See, it’s not only Trump supporters who can talk like complete assholes,” he continued in the comment, “As long as that’s what’s coming out of that side, then I’ll match you dumb f*cks word for word.”

As if that wasn’t bad enough, he added, “Trump is a half term president, at most, especially if I ever get within 10 feet of that p*ssy.” 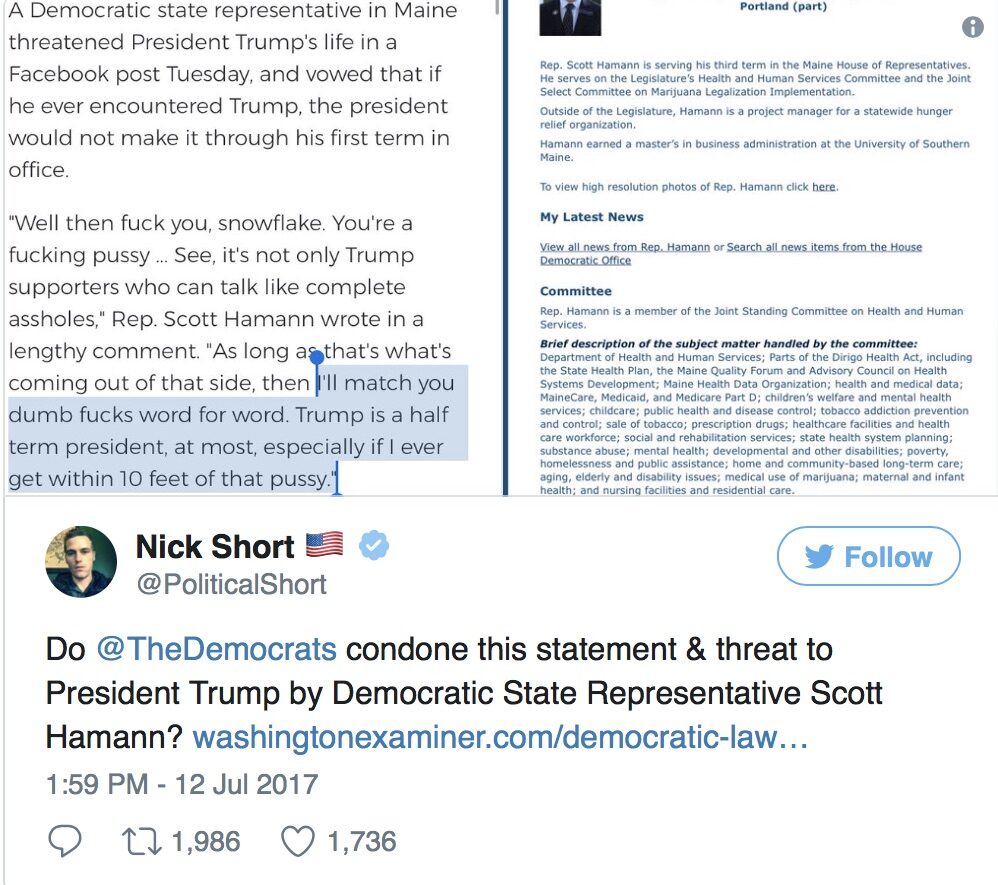 People like this are who at the Democrats want to represent them? Yeah, so tolerant and loving. 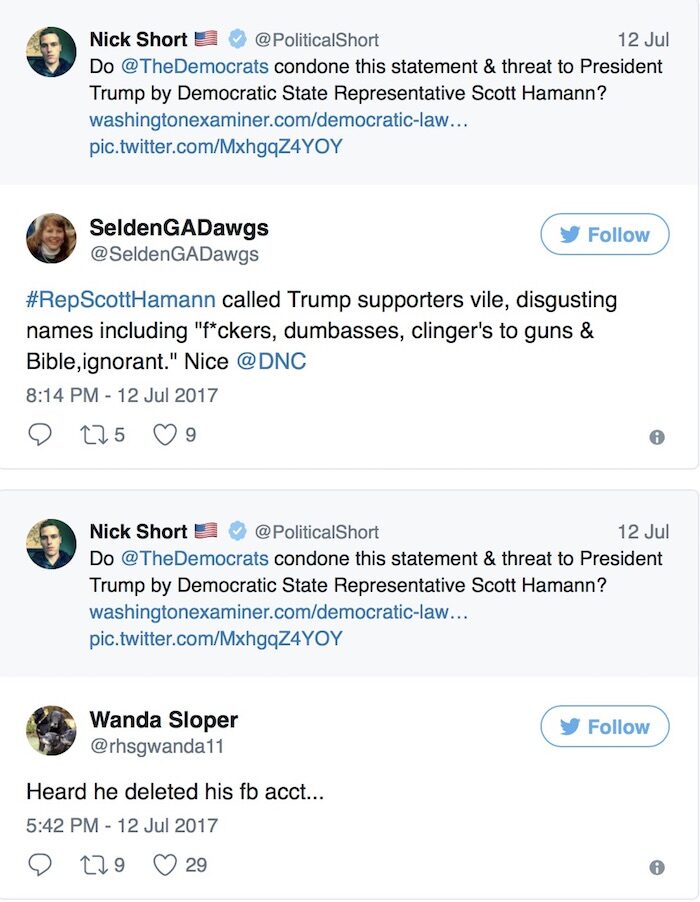 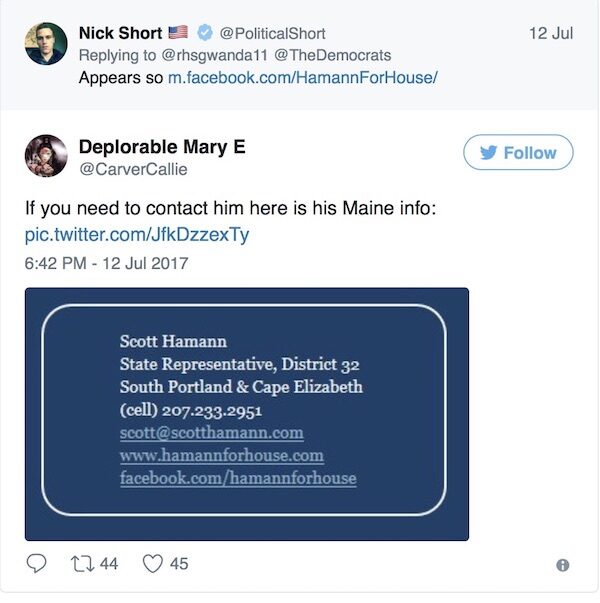 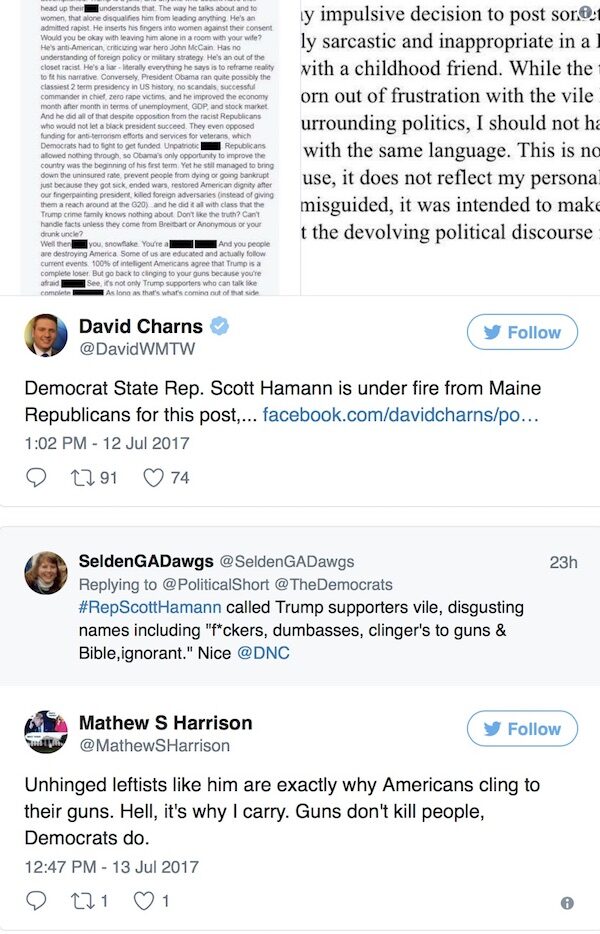 “I regret my impulsive decision to post something aggressively sarcastic and inappropriate in a Facebook exchange with a childhood friend,” he said in a written statement. “While the tone of the post was born out of frustration with the vile language currently surrounding politics, I should not have responded with the same language.

In keeping with the spirit of how insane things are getting in Washington, the following Facebook Live video features former Secret Service Agent Dan Bongino going on a little tirade earlier today about just how out of control the Democrats have become. Speaking about the whole “Russian collusion” nonsense, he says:

“This is a big big deal, but for all the wrong reasons. We have Democrats that just suck. They are horrible, awful, deranged, practically half psycho-pathological people who want to take down a duly elected government, because they absolutely don’t care…

They are absolutely convinced they are going to lie, cheat, and steal, and somehow take down this Trump administration, no matter what…

The fact that the Democrats, these morons are actually calling for Impeachment, which some of them are, and some of them want criminal charges… what? Tim Kaine, the running mate for Hillary Clinton, the Democrat Senator from Virginia ACTUALLY CALLED IT TREASON!

Treason? Taking a meeting with a Russian lawyer, who had zero information about anything, and wanted to talk about Russian adoption… is treason?

So let me get this straight: You’re talking about charging a guy with treason, where no information exchanged hands, yet there is a Politico piece out which alleges, and has some evidence in the piece, ACTUALLY COLLUDED with the Ukrainian government….”

As reported by State of the Nation earlier this week, there’s one major advantage that President Trump has at this pivotal stage when members of the various intelligence communities, almost the entire Democrat party, and the almost the entire mainstream media are committing acts of sedition literally EVERY week…

If he wanted to, the President ‘could’ legally shut down the entire mainstream media with one executive order.  All it would take is the stroke of a pen. The same goes for the C.I.A., it too can be dissolved with the stroke of the presidential pen. Sedition is defined as “Conduct or speech that incites people to rebel against the authority of a state or monarch.”

Could the definition or the acts of the aforementioned groups be any more clearly defined? Those groups have done nothing BUT incite people to rebel against President Trump’s administration. I don’t support shutting down the press by any means, but that just brings us back to the central question:

HOW MUCH MORE INSANITY WILL SANE PEOPLE TOLERATE?

Sen. Chuck Schumer: We Need to "Improve Our Healthcare System" Like "Our Founding Fathers Intended"