Hamas-tied CAIR has played a huge role in intimidating the media and the public into thinking it wrong to oppose jihad terror. This article is typical of the Islamic propaganda and whitewash that is churned out daily by the media apologists.

Did the writer of this article Kevin Litten look into CAIR at all or did he file this story from the bar-stool of some seedy hotel while reading CAIR’s media guidelines on how to report on jihad?  One can only imagine the puff pieces Litten would have penned for the American Bund back in the 30s. I hope Litten is not fool enough to be pimp without pay. These Muslim Brotherhood groups pay their media lapdogs quite well.

Here is what writer Kevin Litten neglected to mention:

–CAIR is an unindicted co-conspirator in a Hamas terror funding case — so named by the Justice Department.

— The UAE has designated CAIR a “terrorist organization.”

–CAIR operatives have repeatedly refused to denounce Hamas and Hizballah as terrorist groups.

–CAIR’s cofounder and longtime Board chairman (Omar Ahmad), as well as its chief spokesman (Ibrahim Hooper), have made Islamic supremacist statements — that is, statements about how they want Islamic law to rule in the US. 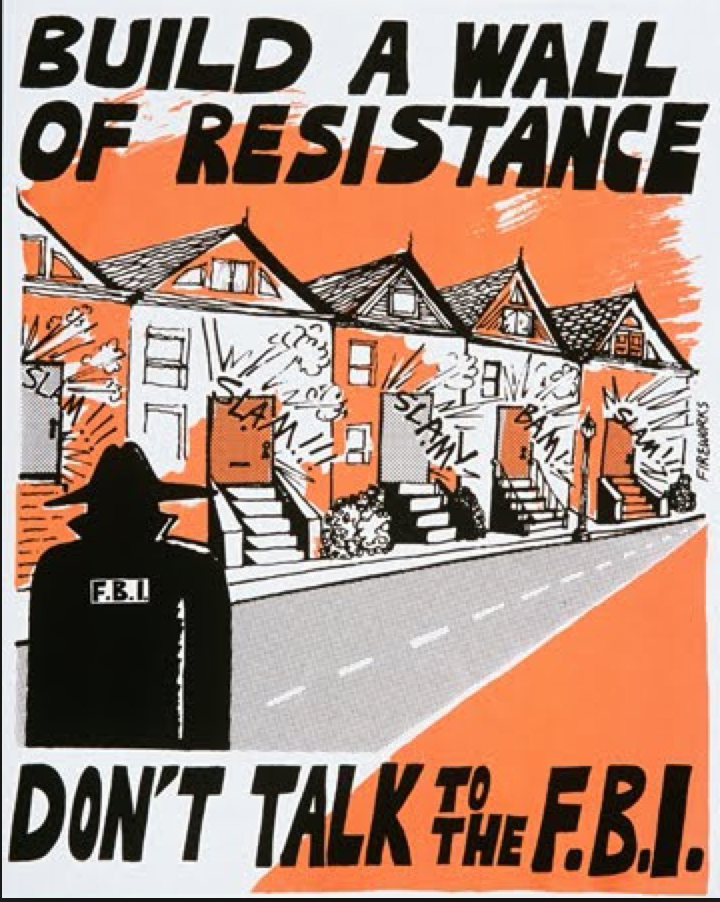 –CAIR has opposed every anti-terror measure that has ever been proposed or implemented.” (Source)

— A Muslim nation with ties to 9-11 (Qatar) made a major endowment to the Council on American-Islamic Relations.

–The Saudis have funded them with at least 50 million dollars.

–Terror-tied CAIR has actively sought to smear, defame and destroy counter jihadist activists and anyone who opposes jihad terror.

–CAIR’s parent group, the Islamic Association of Palestine, was listed in a captured internal Muslim Brotherhood document as being one of the Muslim Brotherhood groups in the US, and that document said these groups were dedicated to “eliminating and destroying Western civilization from within, and sabotaging its miserable house.” 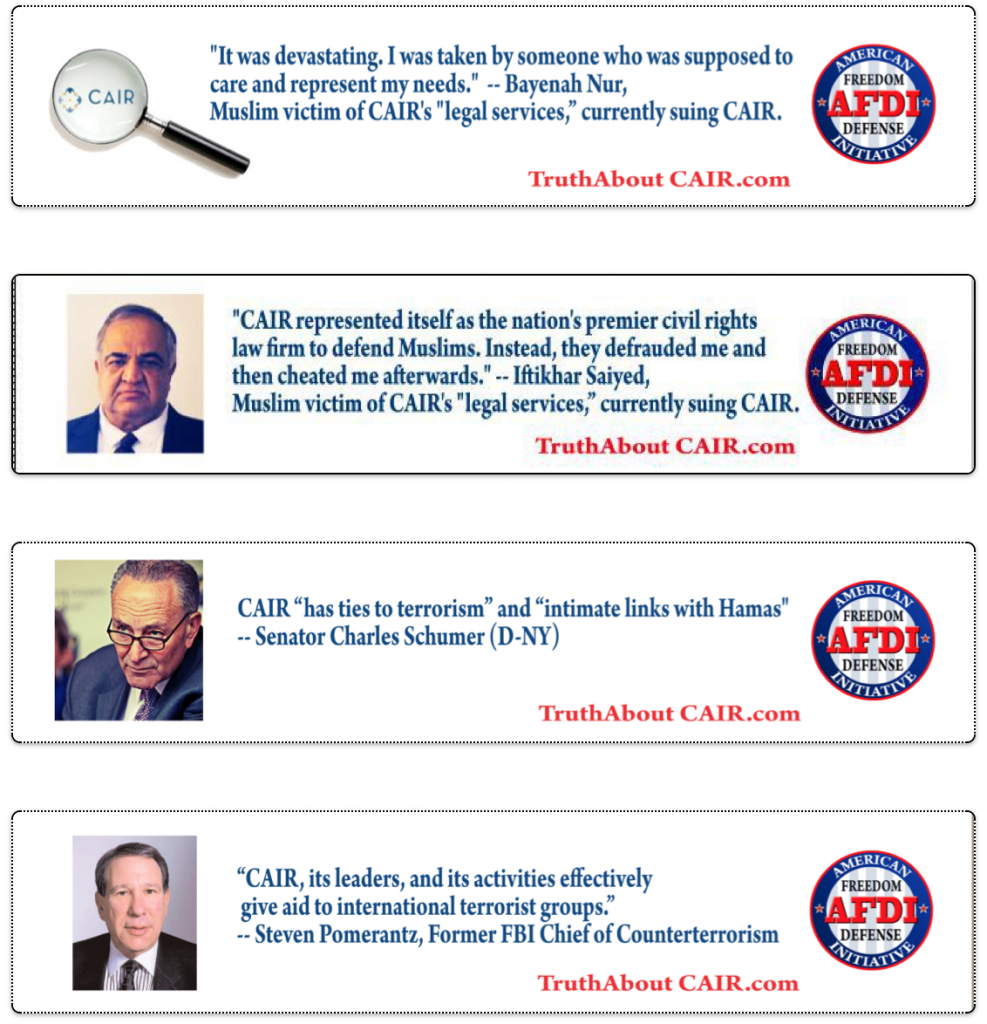 Awad: “I am a supporter of the Hamas movement.”

Ahmad: “Islam isn’t in America to be equal to any other faith, but to become dominant. The Koran … should be the highest authority in America, and Islam the only accepted religion on Earth.”

Hooper: “I wouldn’t want to create the impression that I wouldn’t like the government of the United States to be Islamic sometime in the future.”

Any Islamic group with Hamas-tied CAIR’s deep ties to terror groups should be barred from dealing not only with law enforcement but with the Department of Justice, Department of State and Department of Homeland Security. 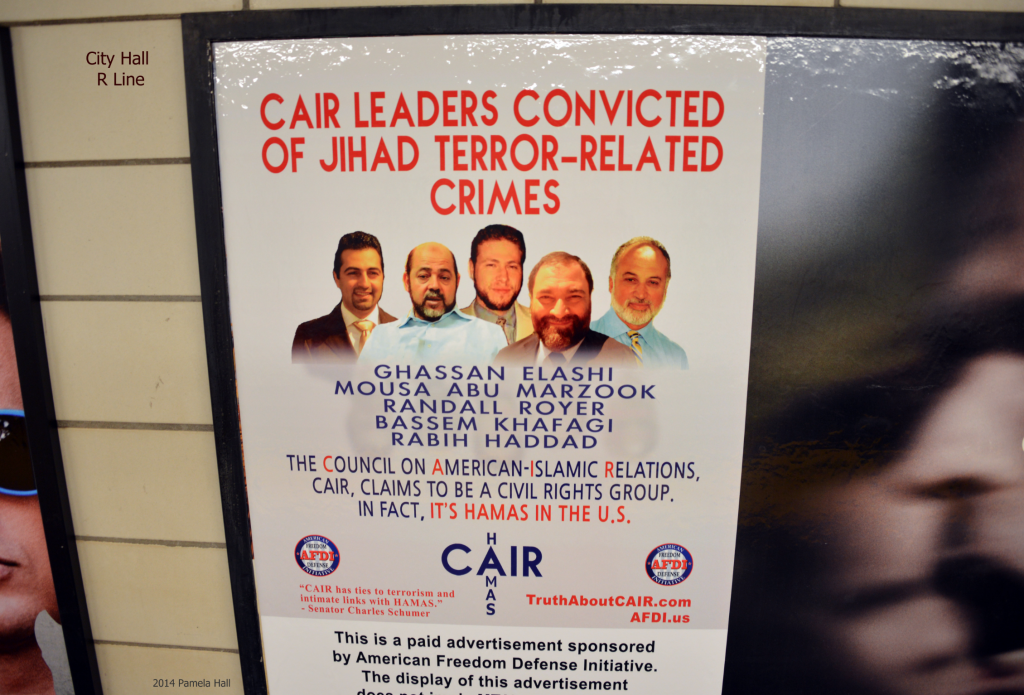 The House of Representatives on Friday passed a controversial resolution that directs law enforcement not to have contact with the Council on American-Islamic Relations, a group that advocates for Muslims.

This is the media’s scrub of the terror-tied group.

The resolution does not carry the weight of the law, so law enforcement organizations can consider the resolution a recommendation rather than a mandate. But several House members — many of them members of the Legislative Black Caucus — who said they were concerned the resolution was designed to malign what they consider a civil rights organization.
But the bill’s author, state Rep. Barry Ivey, said he was just trying to align Louisiana law enforcement with the FBI, which cut of formal contact with CAIR after a 2007 trial of the Holy Land Foundation for Relief and Development. During the trial, according to an Office of the Inspector General report, evidence emerged indicating CAIR had ties to Hamas — considered a terrorist organization by the U.S. Government.

But as Rep. Katrina Jackson pointed out during House debate, CAIR itself has never been considered a terrorist organization, though it has been a target of criticism among conservatives, according to the New York Times. In 2011, the Times reported, CAIR came under attack during a Congressional hearing for being “basically a terrorist organization,” according to one member of Congress; a CAIR official was quoted as saying the hearing was “political theater.”

Jackson moved to weaken Ivey’s bill during the floor debate, getting House members to agree to change the bill only if the U.S. Department of Justice finds that CAIR has, in fact, “been involved in or supported any terrorist activity.”

Even so, there were objections to the bill. Ahead of the vote, the New Orleans Palestinian Solidarity Committee issued a news release urging House members to vote against the bill. The committee called it “an Islamophobic act targeting Muslim Americans,” adding that CAIR “works to promote religious freedom and has opposed Islamophobia across the country.”

State Rep. Pat Smith, D-Baton Rouge, also wondered whether CAIR was even active in Louisiana and questioned why the bill was necessary. She expressed concern that the bill was designed to promote fear among Louisiana residents, saying that people who read the bill “would be more likely to, for any Muslim person they seem, there will be fear.”

“I wish that individuals who bring bills like this would be more concerned about things that go on in this state like the KKK,” Smith said.

But Rep. Mike Johnson, a Bossier City Republican and a supporter of the bill, said that wasn’t the case. He said the House resolution was designed to alert law enforcement to an organization that the FBI has expressed concerns about in the past.

Attempts to return the bill to the House calendar, a move that would have put off a vote on the bill, failed. When the House finally voted, it passed 63-18. There were 24 House members absent for the vote — more than there were present and voting against.

Obama Told Trump to Stop Whining about Rigging Elections, but Guess What He was Doing in 2008 (Video)