The only Syrians we should be allowing into this country are the Christian Syrians who are being slaughtered en masse by jihadist forces. Who is vetting these Syrian Muslims? Obama’s Muslim Brotherhood picks at the DoS? How many of these “refugees” are battle-hardened jihadists? Hostile invaders?

“Hundreds?” Well, how could that be I wondered, since we are constantly reminded that the unwelcoming US has only admitted a hundred or so Syrian refugees.  It turns out that “hundreds” of those being granted ‘temporary protected status’ are choosing to go to established Syrian communities, like those in North Jersey, to be with their people.

I continually find it amusing that no one ever questions the desire of ‘immigrants’ to congregate with their ethnic and religious groups in certain sections of cities or states, yet if any people of European background (you or me) would say I want to live with my kind of people we would be excoriated by the diversity-is-beautiful crowd as racist, rednecked boobs!  But, I digress. 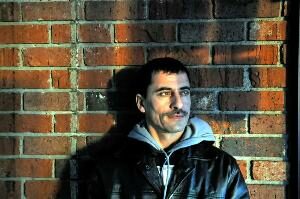 Mahmoud Alzouabi, one of the stars of this story, traveled to Jordan with his wife and 8 kids and got a visa to the US. How did he pull that off when several hundred thousand others couldn’t? CARMINE GALASSO/STAFF PHOTOGRAPHER

Syrians fleeing war and devastation in their homeland have settled in North Jersey by the hundreds since turmoil broke out three years ago. While family members, houses of worship and a social services agency offer support, many struggle to find work, afford housing and deal with grief amid harrowing experiences in war.

Then we hear about the first star of the story (there are always the sad tales in these articles designed to pull the heartstrings of your unwelcoming racist heart!):

Mahmoud Alzouabi, a 42-year-old Syrian refugee now living in Paterson, fled to a refugee camp in Jordan before getting a U.S. visa. Alzouabi saw a close friend shot to death at a demonstration.  [So how did this man with his family, of all the “refugees” arriving in Jordan get a visa to America?—ed]

They want to be with Syrians:

Drawn to North Jersey by long-established Syrian-American communities, many arrive with little more than the clothing they are wearing and with bitter memories of the life-threatening conditions that drove them from their homes.

The Syrians who have come to North Jersey are largely unrecognized as they blend into Arab-American neighborhoods in a diverse state that is home to more than 9,000 Syrian-Americans, according to the Census Bureau.

Thousands being approved to stay in US under ‘Temporary Protected Status’ but as we have reported here at RRW over the years—no one ever goes home!  Just ask the over 100,000 Salvadorans here “temporarily!”  It is a joke.  However, unless they can figure out some fraudulent way to do it, those on TPS are not allowed to dip into welfare (maybe in Maine!) while refugee status confers on those lucky people a whole array of social services.

The United States offers financial aid and transitional help to Syrians who are accepted into its refugee resettlement program, but only 108 Syrians have been officially designated as refugees. Many others are stymied by stringent U.S. security concerns over people arriving with no identification papers. Others face a high legal barrier in the requirement that they prove they are victims of persecution and not merely people displaced by war.

Many of the Syrian refugees have arrived with visitor’s visas and extended their stays, legally, through what is known as temporary protective status, which allows them to get Social Security numbers and authorizes them to find employment.

No work!  (Someone please tell Grover that there are LEGAL Syrians over here looking for work!):

With temporary protected status, he has work authorization and a Social Security number, but he cannot find work. He [another star of the story—ed] applied for health care coverage but did not understand the responses he got. His wife is eight months pregnant.

“Everything is difficult here. Everything is complicated. There’s no help,” said Askar, who has applied for refugee status, fearing religious persecution back home.

They want refugee status so they can get taxpayer-support!

Syrians who are granted asylum are eligible for help from programs funded by the federal Office of Refugee Resettlement, including cash and medical assistance, job preparation and placement and English-language training. But only 108 Syrians have been granted official refugee status by the U.S.

Most have come to this country as visitors and stayed. The U.S. Citizenship and Immigration Services has accepted 5,261 applications for temporary protected status from Syrians already in the U.S., approving 2,038 of those and denying 59; the rest are pending. Of those, 335 applications came from Syrians in New Jersey; 150 were approved, three denied and the rest are pending.

Big rush of Syrians expected in US in 2015 and 2016.  Will Mr. Open Borders himself, Chris Christie, be welcoming them on the tarmac at Newark’s Liberty International airport?

With no end in sight to  the war, more Syrians can be expected to arrive in North Jersey. The U.S. government expects to receive thousands of referrals for resettlement from the United Nations’ refugee agency in 2014, with arrivals expected in 2015 and 2016, according to the State Department. It is not known how many will be accepted.

Some elected officials and human rights groups have called for the U.S. to do more and take in 15,000 Syrians refugees. According to news reports, the Obama administration expects to take in only as many as 2,000.

For years we watched the media drumbeat to bring in the Iraqis (and they are coming by the tens of thousands now) and henceforth we will see one story after another, like this one, as the media and the open borders movement builds their Syrian “refugee” PR campaign.  And, just watch, even if their ‘civil war’ ends before 2015, the flood gates to Syrian refugees will be open and they will keep coming (just as the Iraqis are still coming to this day)!

Addendum:  Check out the story we posted recently about one Syrian family getting into the US via Cuba, here.  They too are in North Jersey.