If Donald Trump Wins The Election, It Will Be The Biggest Miracle In U.S. Political History

Are we about to see the largest election day miracle of all time?  Because as I will show in this article, that is precisely what it is going to take in order for Donald Trump to win.  Before I go any further, I want to make it exceedingly clear that I am not saying what the outcome will be on November 8th.  As I recently told a national television audience, I do not know who is going to win.  In this article I am simply going to examine the poll numbers and the electoral map as they currently stand.  But in this bizarre election things can literally change overnight, and it is entirely possible that we could still have another “October surprise” or two before it is all said and done.  And without a doubt Donald Trump desperately needs something “to move the needle,” because if the election was held today Hillary Clinton would almost certainly win.

What we have witnessed so far during the 2016 election season has been absolutely unprecedented.  Just consider some of the things that we have seen up to this point in time.

We have never had a bigger “October surprise” than the release of the lewd audio tape from 11 years ago in which Donald Trump claimed to grope women without their consent.

We have never seen the mainstream media openly attack a presidential candidate as much as they have attacked Donald Trump.  In the past, the big mainstream news outlets at least pretended to be fair and balanced, but this year they have completely discarded all notions of objectivity.  They should be completely and utterly ashamed of themselves, and no matter who wins the election they will never be able to get their integrity back.

We have also never seen a major party at war with itself this close to a presidential election.  It has been said that a house divided against itself will surely fall, and a whole host of prominent Republican leaders have been openly attempting to sabotage the Trump campaign.

If Donald Trump is able to overcome all of these factors, it truly will be a miracle of Biblical proportions.

As it stands at the moment, however, the numbers are looking quite ominous for Trump.  Right now, the Real Clear Politics average of national polls has Hillary Clinton ahead by 6.2 percent.  Most political experts consider that to be an insurmountable lead at this stage in the game.

But even if Trump can close that gap and pull ahead, that does not mean that he will win the election.  In fact, Trump could beat Clinton by millions of votes nationally and still lose.

So unless something dramatically changes, Donald Trump is essentially going to have to run the table in all of the closely contested states in order to win, and the mathematical odds of that happening are extremely slim.

Let’s take a closer look at this.  The first thing that Donald Trump is going to have to do in order to get to 270 electoral votes is to win all of the states that Mitt Romney won in 2012.  That would get him up to 206 electoral votes. 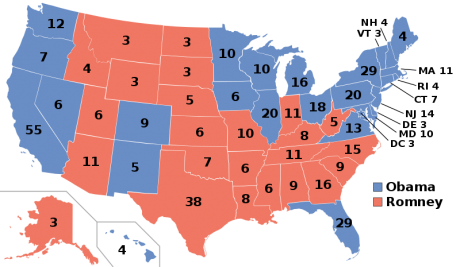 But for a moment, let’s assume that Trump can win all of the states that Romney won.  On top of that, there are four other states that Trump must win…

#1 Trump must win Florida’s 29 electoral votes.  Without Florida, Trump has no realistic path to 270 electoral votes.  So on election night if it is announced that Trump has lost Florida, you might as well turn off your television and go to bed because Trump is going to lose the election.  Unfortunately for Trump, four recent major surveys all show Trump down by four points in the Sunshine state.

#2 Trump must win Ohio’s 18 electoral votes.  No Republican has ever won the presidency without winning Ohio, and the two most recent major surveys show that Trump and Clinton are tied in the state.

#4 Trump must win Nevada’s 6 electoral votes.  At this point that is looking like it will be very tough to do, because all of the recent polls have Clinton leading in Nevada, including the most recent one that has her up by 7 points.

If Donald Trump can win those four states, that still does not get him to 270 electoral votes.  Instead, it gets him to 265 electoral votes, and so he would still need one more medium-sized state to win.

The most likely candidates for that last state are Pennsylvania, Michigan, Wisconsin or Minnesota.  Unfortunately for Trump, Clinton appears to have big leads in all four of those states right at this moment.

But even if Trump can somehow pull off a miracle and squeak past the 270 electoral vote mark, the truth is that Utah could still mess everything up.

Do you remember Evan McMullin?

He was the third party “conservative alternative” candidate that was hyped for a couple of days but that seemingly fell off the map afterwards.

He is only on the ballot in 12 states, but one of those states is Utah, and it turns out that Evan McMullin is a Mormon.

Many Mormons believe that a Mormon will be elected president someday when the U.S. Constitution hangs “like a thread.”  According to this belief, this Mormon president will turn the country around and all sorts of wonderful things will start to happen.  Many Mormons thought that Mitt Romney was going to be this president, but now Evan McMullin has become the target of these expectations.

So how in the world could Evan McMullin become president?

Well, their plan is to have Evan McMullin win Utah, and that could potentially keep both Donald Trump and Hillary Clinton from both getting to 270 electoral votes if the election is super close.  If that happens, the election would be thrown into the House of Representatives.

It is being projected that the House will still be controlled by the Republicans after this election, and so the choice would come down to either Trump or McMullin, and those backing McMullin believe that he would have a realistic shot in that scenario.

I know all of this sounds very strange, but this is actually being discussed around family dinner tables all over Utah tonight.

And in recent days Evan McMullin has been soaring in Utah.  One recent survey shows Trump with a one point lead over McMullin, and another recent survey actually show McMullin leading Trump by four points in the state.

So Trump could pull off a miracle and do everything else that he needs to do to get to 270 electoral votes, and Utah could end up messing up everything for him.

In addition, it is also very important to keep in mind that Trump could actually get all of the legitimate votes that he needs to win and still have it stolen from him by election fraud.  There was widespread evidence of “funny business” in 2012, and this is something that I detailed for a live studio audience down at Morningsideearlier this month…

Are you starting to see why I would consider this to be the biggest miracle in American political history if Donald Trump actually overcomes all of these factors and wins the election?

And we don’t have to wait until November 8th to get some indications about how the vote is going to go.  Early voting is already taking place is some states, and so far the signs are not encouraging for the Trump campaign.  The following comes from CNN…

Democratic early turnout has stayed steady in North Carolina compared to 2012, while Republicans have dropped by about 14,500. In Nevada, Democrats have a smaller early voting deficit today than they did at this point in 2012. And Democrats are slightly ahead in Arizona in the early vote so far, though they are lagging Republicans in the tally of how many Arizonans have requested ballots.

Perhaps most surprisingly, Democrats improved their position in conservative and Mormon-heavy Utah, where recent polls have shown a tight race. At this point in 2012, Republicans led Democrats in early voting by more than 22,000 voters. But so far this year, the GOP advantage is only 3,509.

But if you do want Trump to win, the good news is that we still have more than two weeks before November 8th.

We have seen some extremely bizarre things happen already in this election, and a miracle is definitely not out of the question.

In fact, I am of the opinion that it is quite likely that some very strange events could take place between now and early November.  So hold on to your hats, because the most interesting portion of the 2016 election may still be ahead of us.

Article reposted with permission from The Economic Collapse Blog

Take a look at the future of America: The Beginning of the End and then prepare

Corrupt Clinton Governor Under Recent Fed Investigation May Run In 2020

Corrupt Clinton Governor Under Recent Fed Investigation May Run In 2020