Former Democrat Representative Corrine Brown (FL) was indicted in July 2016 on 24 counts of corruption in which she and her chief of staff created a sham foundation to spend thousands of dollars on themselves.  Now, she is in trial for those charges.\

Brown, along with her chief of staff, Elias “Ronnie” Simmons, were indicted.  Simmons pleaded guilty to fraud in February.  Brown pleaded not guilty.

Among the expenses that Brown racked up after she lost her re-election to former Florida State Senator Al Lawson were $11,278 on what she claimed was lodging at a Marriot Hotel in Bethesda, Maryland one month after the election, petty cash expenses which totaled more than $2,000 between October and November 2016 and less than $200 on travel expenses in Houston, Texas and Jacksonville, Florida.

On top of that, she spent thousands more on campaign vendors following her loss.

It was reported that Brown also spent only $1,200 from more than $800,000 that was deposited in her Virginia-based foundation, One Door for Education.  At the time, the Washington Free Beacon reported:

Federal authorities found that the money was used for the personal benefit of Brown, Simmons, and Carla Wiley, the foundation’s president. Wiley pleaded guilty to conspiracy to commit wire fraud in early March. The trio used $200,000 worth of funds to purchase goods and services like NFL tickets, plane tickets, luxury vacations and car repairs, and to throw lavish events.

The Washington Free Beacon obtained records of the Corrine Brown Legal Defense Trust, which was established in 2010. Funds in the trust have already been used to aid Brown’s legal battle. The attorneys representing Brown against the charges, William Sheppard and Elizabeth White from the Jacksonville, Fla.-based firm Sheppard, White, Kachergus & DeMaggio, received $20,000 in legal fees from the account last August.

A review of the records shows that Brown’s legal fund has received $5,750 in donations from three registered lobbyists, which is prohibited by House ethics rules.

The Beacon reported on Thursday, “An FBI agent testified against former Democratic Rep. Corrine Brown (Fla.) on Wednesday, stating that money from a charity intended for children’s education really went into the congresswoman and her daughter’s shared bank account.”

FBI special agent Vanessa Stelly testified against Brown and pointed out her bank records.  According to Stelly, Brown was moving money from the Maryland account into a local Bank of America account.

Jurors were shown ATM images of Brown’s former chief of staff, Ronnie Simmons, collecting money at a drive-through lane, then standing at a counter of the second bank with cash in hand.

As if to debunk defense arguments that Brown was out of touch with her finances while Simmons used her account for his own scam, prosecutor Eric Olshan asked FBI special agent Vanessa Stelly about entries in bank records of balance inquiries.

Those showed, Stelly said, that someone used ATMs in Jacksonville and Fort Lauderdale to check Brown’s bank balance on dates when she was in those cities but Simmons was in Washington.

Still, the issue for Democrats is to push the blame off on someone else.  Brown’s attorney, James Smith, did just that.

“There are two questions that will guide you throughout the trial: Who is Ronnie Simmons?” he said.  “And can you trust him? Sadly, there was one person who believed she could trust him and knew exactly who he was. She was wrong on both questions, and that’s the reason she sits here today being charged with these crimes.”

I’d say the more important question is can you trust Corrine Brown?  What evidence is there that demonstrates you can trust her?  I mean take a look at the people she surrounds herself who have all had issues with corruption. 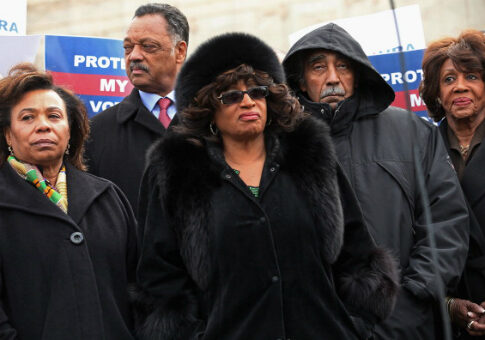 This is a woman who claims that the Bible supports Socialism.  When you have that mindset, is there really any restraint to you justifying your own bad behavior or attempting to place the blame for your bad behavior on someone else?