As the Obama administration defends the Muslim Brotherhood, denying that it is a terrorist organization, Interpol has issued a “red alert” for the arrest of the group’s spiritual leader Yusuf al-Qaradawi. Al-Qaradawi is currently being given safe harbor in the country of Qatar, which is regarded by the Obama administration as an ‘ally’ of the U.S.

According to one report:

A “red alert” has been issued by Interpol, the international police agency, for the arrest of Muslim Brotherhood spiritual leader, Sheikh Yusuf al-Qaradawi. The alert was sent out at the request of the Egyptian judiciary who has brought charges against the 88-year old imam for “agreement, incitement and assistance to commit intentional murder, helping the prisoners to escape, arson, vandalism, and theft.”

Interpol said it is planning to issue red alerts to its 190 member states for 41 other Muslim Brotherhood associates.

Chief of the Egyptian Police Interpol Gamal Abdel Bary said that issuing arrest warrants for Brotherhood fugitives is an “important change in the international community’s view of the banned group members.”

In mid-November, the United Arab Emirates joined Egypt and Saudi Arabia in banning the Muslim Brotherhood as a terrorist group. The UAE banned 81 other organizations as terror groups as well, including many Brotherhood affiliates, including the American-based Council on American-Islamic Relations (CAIR) and the Muslim American Society (MAS).

Senior UAE officials stated that CAIR, MAS and other Muslim groups in the West that are linked to the Muslim Brotherhood promote extremism and incite and finance terrorism.

The charges against Qaradawi, who is currently chairman of the International Union of Muslim Scholars, stem from his alleged involvement in a mass jail break that occurred during the 2011 Egyptian uprising against then President Hosni Mubarak. An Egyptian court held the Muslim Brotherhood — as well as Hamas and Hezbollah, two foreign terrorist organizations — responsible for the escape of thousands of prisoners who an Egyptian judge called “a danger to society.”

As Shoebat.com has reported, Qatar is no friend of the U.S. Perhaps nowhere is this more obvious than at the annual U.S.-Islamic World Forum (US-IWF), which is held in Doha, Qatar’s capital. This extremely disturbing reality also makes it very difficult for entrenched Republicans and Democrats to come out strongly against either Qatar or the Muslim Brotherhood.

A prominent figure at the US-IWF events is al-Qaradawi’s deputy at the International Union of Muslim Scholars (IUMS) Sheikh Abdullah Bin Bayyah. At the 2012 US-IWF, then Deputy National Security Advisor to Barack Obama Denis McDonough schmoozed with Bin Bayyah, as Shoebat.com reported. Since then, McDonough has become Obama’s Chief of Staff. Also reported by Shoebat.com earlier this year was Barack Obama formally praising Bin Bayyah during a speech in front of the United Nations.

The US-IWF has prominent figures in both U.S. political parties quite dirtied up, which helps to explain why leaders in both parties – particularly the Republican Party – have been so silent on the issue of the Muslim Brotherhood. The US-IWF was begun one year after the 9/11 attacks, during the Bush administration, and continues to this day.

As Shoebat.com reported, less than two years after the 9/11 Commission completed its supposedly comprehensive report, the Executive Director of that Commission – Philip Zelikow, a Republican – actually attended the US-IWF that year (2007) and shared a stage with al-Qaradawi. To put this in the proper context, this would be like the Executive Director of the Nuremberg trials sharing a podium with a Nazi general after the trials. That is NOT an overstatement. As Executive Director of the 9/11 Commission, Zelikow had to have known the connections of Al-Qaradawi to al-Qaeda. Besides, when it comes to Hitler, al-Qaradawi has expressed sadness that the Nazi leader didn’t finish the job. That alone should have precluded Zelikow from sharing that podium with al-Qaradawi. 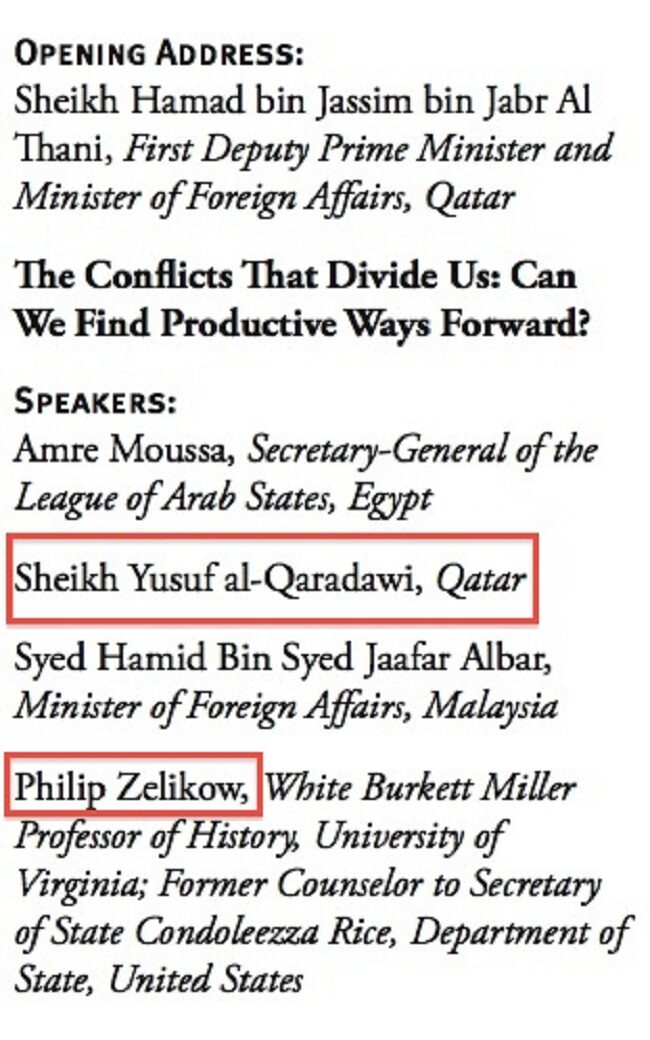