While many continue to ridicule those that contest Barack Obama’s eligibility, and yes, I am one of those that contests it, it appears now that Congress is paying attention to the arguments. Since the time the evidence began to emerge that Barack Obama’s birth certificate was a forgery and claims have been made that he was not born in the United States, people like me have been patted on the head and called names like “birthers.” Well it appears that all may be about to change and it may have consequences for more than just Barack Obama.

According WND, Lt. Mike Zullo, Sheriff Joe Arpaio’s Cold Case Posse lead investigator, indicates there is interest being expressed in Congress about his investigation’s conclusions that the White House document is indeed a fraud, nothing more than an image created on a computer. If you recall, Arpaio called the evidence against Obama’s eligibility a national security issue.

Many who have followed the accounts and looked at the evidence have already chosen which side they fall on, but to be clear, this is not a bunch of people determining this in a back room with tin foil hats on. The people who have come to this conclusion are not just law enforcement agents like Arpaio and Zullo. In fact, We have documented several high profile people who have gone through the document and determined it is a fake. 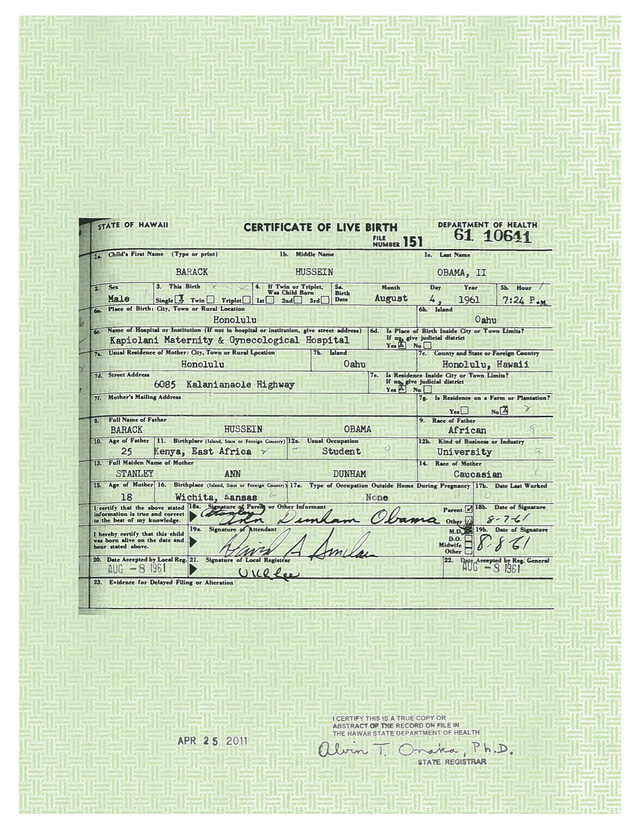 Lord Christopher Monckton has said that the Obama birth certificate is a forgery and that Obama is an illegal president. He even presented an affidavit to that effect.

Bob Unruh of WND cites something else Lord Monckton pointed out:

Monckton also noted the recalcitrant attitude on the part of authorities in Hawaii to the official law enforcement questions about the document’s validity.

And he cited the fact that in 1961, state law permitted Hawaiian parents of children born anywhere in the world to register them as Hawaiian-born, a legalized backdoor to U.S. citizenship.

“Neil Abercrombie, Hawaii’s governor, said he was present at Obama’s birth. Then he changed his story,” Monckton wrote.

“The posse has reported to the sheriff that two crimes have been committed: first, fraudulently creating a forgery that the White House had characterized, knowingly or unknowingly, as an officially produced governmental birth record; and secondly, fraudulently presenting to the residents of Maricopa County and to the American public at large a forgery that the White House had represented as ‘proof positive’ of Obama’s authentic 1961 Hawaiian long-form birth certificate.”

Israeli scientists have also sided with Zullo and Arpaio claiming that their research has concluded that the Obama birth certificate is a fake.

Barack Obama’s own attorney, Alexandra Hill, pretty much admitted the document was fraudulent. In her appearance in a New Jersey courtroom to argue that Obama was eligible to be on the ballot back in 2012, Hill argued that the online birth certificates was “irrelevant to his placement on the ballot.” She then went on to try and establish his eligibility by speaking of his political popularity, not legal qualification, in order to be a candidate!

Even the Kenyan government heavily documented in its own records that Barack Obama was born in Kenya! In wanting to congratulate Obama on his first victory in 2008, the Kenyan Parliament recorded these words:

“Mr. Obama, is a son of the soil of this country (Kenya). Every other country in this continent is celebrating the Obama win. It is only proper and fitting that the country which he originates should show the same excitement, pomp and colour.”

This statement was followed by the Deputy Speaker warning the member who just made the statement,

“You had better be very careful where you transgress between watching your own sovereignty and what can be interpreted in some quarters as some form of treason.”

The document below has been presented as possibly the authentic birth certificate of Barack Hussein Obama. 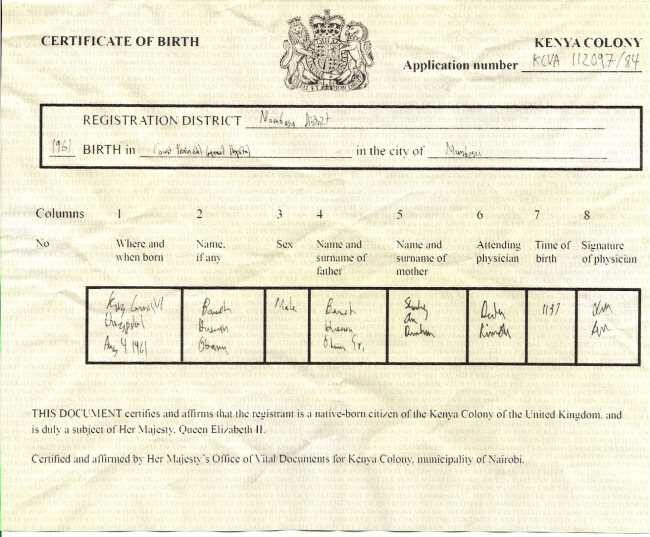 Barack and Michelle Obama, along with the Kenyan Ambassador Peter Ogego, have all said that Obama was either born in Kenya or referred to Kenya as “his homeland.”

I’ve called many congressmen to speak with them about the issue and their offices have always told me that there has been talk of getting the evidence together to remove Obama from office because of his ineligibility. My question has always been, why are you waiting? The leg work has been done. The evidence is in hand. Perhaps for many, their response to the issue has been like Col. Allen West at CPAC, who would not get behind the evidence of the Cold Case Posse saying that he had “future political aspirations” and couldn’t involve himself in it.

We definitely need men of conviction and courage who will take this information seriously and not think of their “future political aspirations,” but will think of the country first and their duty to do what is right. In my estimation, we need to remove those who have “political aspirations” and put only those in office who really are there for the best interest of the people. Now we look to the Alabama Supreme Court’s ruling on Obama’s eligibility. Should it rule that he is ineligible, I will watch eagerly how it will affect other states and our representatives in Washington.