Is God Sending a New Curse on the Sodomite Community?

While the sexual revolutionaries taunt us of their political victories in gaining more “freedom,” more “budget,” and more “money” as the means to promote their perverse agendas, here comes God and he curses them to self-destruction. The last few days, the CDC sent a litany of serious warnings. Scientists cannot anymore cover up the new curses of homosexuality, lesbian lifestyle, or the general immorality, which is growing leaps and bounds, infecting the U.S. Syphilis had grown a whopping 27 percent. There are estimated: “20 million new STD cases in the US each year and half of these are among young people 15-24 years old.”

And it is spreading like wildfire, especially throughout the LGBT community (praise God). The superbug is here, much faster than previously anticipated and is now found in the U.S.

Now think about this for a moment. If just released reports show a 20 million increase in STD each year and a half in the U.S. alone and that we are in a 20-year high, if this continues, in a decade, this might multiply to 200 million infected. We have become a society filled with sexual infections:

“The federal health agency found young people and gay and bisexual mencontinued to face the greatest risk of becoming infected with STD.”

“This summer, the U.S. Preventive Services Task Force (USPSTF) recommended people with the highest risk of syphilis infection, including men who havesame-sex partners and people living with HIV, should be tested every three months, rather than once a year.”

“We have reached a decisive moment for the nation,” said Dr. Jonathan Mermin, director of CDC’s National Center for HIV/AIDS, Viral Hepatitis, STD, and TB Prevention in a news release. “STD rates are rising, and many of the country’s systems for preventing STDs have eroded …”

“The 2015 data should American 15 to 24 years old accounted for nearly two-thirds of chlamydia diagnoses, and half of the gonorrhea cases. Gay and bisexual men accounted for the majority of gonorrhea cases, and 82 percent of syphilis cases. The health agency also said antibiotic-resistant gonorrhea may be higher among men who had sex with men.”

Do you see “82 percent of syphilis cases” are amongst “gay and bisexual men”?

We warned them that a Christian is always on the victorious side. They laughed. With God, we will win every battle. And its not just “The highest risk of syphilis infection,” but this includes the “super-gonorrhea,” which is highest among sodomites.

The more they curse us, the more we win. Though they curse us for the CDC giving the bad-news and always question us with mockery, why not curse and mock their own ‘experts’?

These are not our conclusions at Shoebat.com, but the expert conclusions from our pro-LGBT detractors, who insists we always provide ‘expert’ opinion while the ‘love the LGBT’ enablers tell us to quit – that God loves the homo and He only hates the homophobe.

Well, here you have it from the CDC. But Fudge-packers who hate God refuse to listen. Well, now listen to your ‘experts’:

“But, unfortunately, HIV treatment has no impact on prevention of (other) STDs,” Dr. Gail Bolan, Director of CDC’s Division of STD Prevention said, according to NBC.

When it comes to health threats facing middle-aged men, many of us think about high cholesterol, high blood pressure, or heart disease. But a surprising number of this male demographic is developing a form of throat cancer that targets the tonsils or back of the tongue — an area called the oropharynx. Oral cancer was once linked mainly to alcohol consumption and tobacco use, but increasingly, oral sex is becoming a primary link.

“This is just the tip of the iceberg. We are going to see a lot more new cases of oropharyngeal cancer related to HPV,” said Geisinger Primary Care Physician Aliasgar Chittalia, MD. HPV, or Human Papilloma Virus, is sexually transmitted, most often among people in their teens or 20s.

Just when man thought he was smarter than God by inventing condoms, God looks down and creates a new biblical plague, worse than the HIV Virus and AIDS.

So to all you sexually liberated crowds, welcome to Super-God showing up giving you Papilloma, super gonorrhea and super chlamydia.

While we primarily get attacked for our anti-LGBT stance, even by so-called ‘Christian pastors’, standing alone on what is right will always prove we will be victorious through God, who is no respecter of persons. To these we say, because Noah was right, everyone on earth died. One man can be right and the whole earth parishes. God let die all Israel in Sinai and only Joshua and Caleb made it. God does not mind flushing down the toilet the whole earth if they disobey.

Papilloma is a deadly virus that, no matter what condom one uses, will still be sexually transmitted, and it predominately infects the LGBT community. God from above made it that not only intercourse spreads this disease (since man thought he was smart by inventing a condom), but whether  these sexually deviant reprobates use condoms or not, they still get the disease through genital skin to skin contact, causing the HPV (Human Papilloma Virus) to spread to new people, making the LGBT’s ubiquitous battle helmet (the condom) rendered obsolete.

There is no escape from God. Even the best experts tell us that HPV is the main cause for some serious genital warts while they still promote the “condom”: 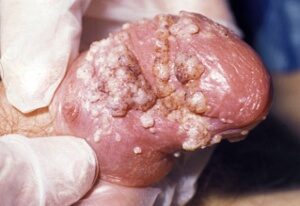 Photo of an LGBT liberated pe

Any questions? Nearly every case of cervical cancer, one of the deadliest types of cancer, which is the leading cause of death in women, has been linked with HPV infections. According to even the pro LGBT National LGBT Cancer Network, sodomites and lesbians are doubly more infected than heterosexual with cancer that results from HPV:

And God did not only defeat man’s attempt to hide his sexual sin behind a condom in order to prevent HIV, but this new disease has become one of the most common, most infectious and dangerous diseases we have ever encountered, and it dwarfs HIV. It is the ISIS of diseases that is caused by a group of different viruses getting together to attack your skin in a horrific way. It infects membranous areas like the mouth, throat, cervix, and others.

Some statistics show that around 65% of every woman will contract HPV in some period of their lives. This is a worrying fact to how infectious HPV is. Of course, what makes HPV so horrible is the way it manifests itself. HPV can easily be spotted by horrible warts. But, do not think that if you catch HPV, these warts or other symptoms will be visible right away. HPV is like the Islamic epidemic in the West, it has a way of keeping its head down for quite a while (decades). This makes HPV even more dangerous. It is a group of more than 150 related viruses, sort of like having cousins and relatives coming together. According to WebMed:

HPV can infect skin not normally covered by a condom, so using a condom does not fully protect someone from the virus. Also, many people don’t realize they’re infected with HPV and may have no symptoms, so neither sexual partner may realize that the virus is being spread.

So now all this education about “safe sex” is out the window. It is not only that, the guise to spread  homosexual education under the excuse of preventative measures is also out the window, since the only preventative measure is abstinence from such weirdities. High-risk HPV strains include HPV 16 and 18, which cause about 70% of cervical cancers.

With Papilloma, God doesn’t have to wipe them out: they will wipe themselves out so we one day can return to the good old days where Papilloma was just a good old Greek song I listened to when I lived in Israel (the good old days):

Trump Spanks Press: Get Used to it, Girly-Boys!

We Have Forgotten God

We Have Forgotten God