On August 4th, Tim Brown posted an article in which Sen. Dianne Feinstein (D-CA) noted that the NSA referred to “The Homeland,” which according to her meant, The United States, Mexico, and Canada. This is interesting, but why would the NSA refer to North America like this?

We know that NAFTA (North American Free Trade Agreement) was first discussed between David Rockefeller and Bill Clinton as early as 1991, when Clinton “attended his first Bilderberg meeting at Baden-Baden, Germany in 1991. There, David Rockefeller told Clinton why the North American Free Trade Agreement (NAFTA) was a Bilderberg priority, and that the group needed him to support it. The next year, Clinton was elected President, and – guess what? – he was a strong proponent of NAFTA.” [1] 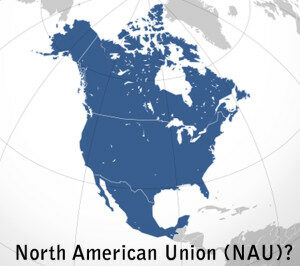 Is the North American Union in the works?

The more we study history, the more we see David Rockefeller’s name and it is worrisome. In a follow up book to his book about the Bilderbergers – “Shadow Masters” – Estulin notes that in the early 1990s, there was a serious move underway to literally dismantle Canada. Yes, of course it sounds far-fetched.

However, Estulin connects the dots to show how not long after the Bilderberg meeting of 1991, plans created there were put in place to take down the Progressive Conservative Party of Canada and that happened. That party “was obliterated in the most one-sided elections in Canada’s history. Brian Muroney tumbled into political limbo. From an overwhelming majority, his part was left with five seats. Jean Chretian, the Liberal Party leader, became the new Prime Minister. Canada’s opposition party became Parti Quebecois, with Lucien Bouchard, a member of the Bilderberg Group and David Rockefeller’s man in Quebec, as the official opposition leader, and with the biggest block of separatists ever.” [2]

Unfortunately for Rockefeller and the Bilderbergs, there was opposition to their plan and even though the elite did what they could to break Canada into parts, the people of Canada rose up and brought the plan to light, ultimately derailing it. Estulin says, “Because of our efforts, their meeting did make front-page news across Canada, igniting indignation, and they were forced to put their plans for the North American Union on the back burner.” [3] It is also interesting to note that, according to Estulin, “The proposed break up of Canada was described in several books on the subject, including New World Order Corruption in Canada, a collection of essays edited by Robert O’Driscoll and Elizabeth Elliott (Saigon Press, 1994).” [4]

Estulin (and numerous others), point out that the Bilderbergers have several objectives. Ultimately, they seek a “one-world company.” This is different from a one-world government. The company they wish to create will be fully transnational, not recognizing any sovereign borders of any nation. If Bilderbergers can successfully bring this about, they won’t need to create a one-world government. If they already control most governments from deep behind the lines, then for all intents and purposes, they are the world government and it’s already in place.

The Bilderbergers want a single, global marketplace where any competition for their company will not exist. They want a world army that they will use as their own police force, which again, will not recognize sovereign borders. This is one of the reasons why our government continues to push more involvement with the UN in America’s affairs. Other countries are doing the same. In order to have a viable one-world company, there also must be a one-world bank, which uses a one-world currency. Once these things are in place and fully active, the idea of a one-world government is moot.

But what does this have to do with NAFTA or a North American Union? Everything. The Bilderbergers need to create larger sovereign nations/states. Why? So that they can be more easily dismantled (or combined) later on. This is exactly why – under the direction of the Bilderbergers – Obama has been literally going through North Africa inciting the overthrow of Mubarak, Qaddafi, Assad, and others. The object is to create one larger sovereign nation, or at the very least, install a Muslim puppet in each who is controllable by the elite. This was supposed to be Morsi for Egypt, but that didn’t work out. He became too dictatorial too quickly and began to think of himself as his own man, a new Pharaoh. The problem is that with all of the financial aid he had received from the US alone, it appears he forgot the first rule of the Illuminati, which is loyalty created through indebtedness.

The North American Union goes back to the days of the Reagan/Bush administration. It was originally described as a Canada-U.S. merger, but later became known as North American Union (NAU). Once Reagan/Bush took office (and there is a great deal more to Bush than meets the eye as told in “Family of Secrets” by Russ Baker as well as Daniel Estulin’s own writings), they determined to find out the true state of the economy and did so by meeting with high-level bankers (led by David Rockefeller, George Schultz, and Paul Volcker). Reagan/Bush were told that if America was a company, it would have to declare bankruptcy.

At this point, a plan was presented to Reagan/Bush whereby Canada would merge with the United States and this merger would take place “over the next fifteen years.” [5] This would help “re-balance the books” for the United States.

In order to successfully merge the two nations, Quebec would have to be separated from the rest of Canada (ostensibly because they speak mainly French there, even though all of Canada is a bilingual country). As they went through the plan, it became clear that a Bilderberg-friendly leader of Canada would be needed, a separation of Quebec must occur, and then merging of the United States with Canada could begin. Estulin states that the original NAFTA agreement specified Canada as the “fifty-first state” and he has “four independent confirmations from US and Canadian officials working on the original NAFTA agreement” [6] that this is so.

There is a tremendous amount of information available for anyone who wants to study this situation in more detail. The last portion of Estulin’s book, totaling 47 pages discusses the North American Union in depth. It is also important to understand that this movement to incorporate Canada (and Mexico) is still underway. This can be seen in the results of a meeting that took place in 2005 between President George W. Bush, President Fox of Mexico, and leaders from Canada who met in Waco, TX and “declared their participation in the Security and Prosperity Partnership of North America (SPP). The resulting Waco Declaration specified that ‘working groups’ will ‘integrate’ and ‘harmonize’ laws and regulatory structures of the three nations.” [7]

Will Canada, Mexico, and the U.S. officially merge one day? If the elite has anything to say about it, the answer is yes. What can you do? Educate yourself and then educate others. Doing nothing means giving up.