Back in 2013, Senator John McCain (R-AZ) decided to take a trip over to Syria to visit Syrian jihadists, known al-Qaeda members who are the enemies of the United States. The senator even posed for a picture with these terrorists and would later seek to arm them via American tax dollars against the Assad government in Assyria. At the time, even Senator Rand Paul (R-KY) blasted the Arizona senator for posing with pictures with known terrorists. Well, now that little photo op has come home to roost. ISIS (Islamic State of Iraq and Syria) has now used the infamous photo in a new jihad campaign.

Isn’t it nice to know that the US government is talking out of one side of their mouths and doing the complete opposite on the other side? Remember in 2013 when John McCain made that trip to Syria to hang out with ISIS radicals? Now, ISIS is using that photo of them hanging with John McCain as propaganda for themselves.

This 2013 photograph of John McCain is being circulated by members of ISIS as a photo of him with members of some of their members in Syria. 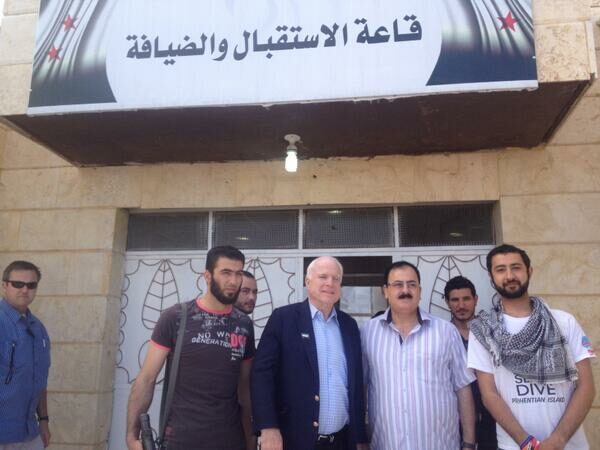 The poster does not specify which of the men is actually from ISIS or “Al Qaeda In Iraq” as they were once called.

At that time last year, I wrote:

Senator John McCain (R-AZ) slipped off quietly to go and meet with Syrian rebels, which we have reported prior to now are the forces of Al-Qaeda, who are supposed to be our enemy. Yeah, I’m feeling a little Orwellian right now. …the Syrian rebels are…. They are foreign professional terrorists tied to Al-Qaeda.

Wanting to arm Syrian rebels is nothing new for McCain or other Republicans like Lindsey Graham for that matter. The Guardian reported last year that the Syrian rebels were members of Al-Qaeda and GOP presidential nominee Mitt Romney wanted to arm them, though he threw in a caveat about not arming terrorists.

Keep in mind that Senator McCain would have Americans indefinitely detained without due process for something like this under the 2012 NDAA that he voted for. However, since he is an elitist, that law will not be applied to him.

At the time, Elizabeth O’Bagy, political director of the Syrian Emergency Task Force said, “This was the start of a really important engagement between various forces in the U.S. government and people in the civilian and armed opposition who are working together to fight for a free Syria.”

“Senator McCain proved today you can very easily go and meet with these people,” she said. “He’s the first U.S. senator to step foot in free Syria and one of the first government officials to reach out to the FSA officials and that’s a huge step.”

Months later, McCain would hire O’Bagy, an al-Qaeda sympathizer, as an advisor, even though she padded her credentials, according to The Cable.

In April, McCain put forward a plan that would put more shoulder-fired stinger missiles in the hand of Syrian Jihadists, the same Syrian jihadists that compose ISIS in Iraq.

If siding with the enemies of the United States weren’t enough, Senator McCain also bashed Syrian Christian leaders during a meeting in Washington in which they provided negative feedback against the Syrian jihadists, which McCain didn’t want to hear. His partner in crime, South Carolina Senator Lindsey Graham, apologized for his “tantrum.”

As for the ISIS campaign, Pamela Geller comments, “He was warned by us repeatedly. But the blowhard blew harder. In an Anderson Cooper interview, Senator McCain claimed, “We can identify who these people are. We can help the right people.” And who does he think the right people are?”

“Those “right’ people, ISIS, are running this photo as part of an online ad campaign,” she adds. “John McCain the face of a thousand beheadings.”

John McCain is what Marine Blaine Cooper called him, a traitor. However, he is also the poster boy for Islamic jihad in Iraq.