ISIS Sends Out This Message To All Christians: ‘You Will Soon See An Ocean Of Blood For All The Nation Of The Cross’

Home » ISIS Sends Out This Message To All Christians: ‘You Will Soon See An Ocean Of Blood For All The Nation Of The Cross’

ISIS today sent out a “Coming Soon” documentary titled Warning: Message Signed In Blood Coming Soon To ‘Nation Of The Cross.’ It will be as ISIS promised, showing a wave of Christian blood which it has spilt. It is quite horrifying.

This morning I noticed some western speculation as to what ISIS had in mind for this sinister surprise which makes it obvious that from the beach wave mixed in blood as to another slaughter of Christians.

UPDATE: WE ARE POSTING THE VIDEO HERE:

Some social media in the west speculated that this has something to do with Denmark, for example:

“Speculation as to ‘nation of the cross’ spans from Denmark (flag with cross) to ‘community of Christendom.’ This announcement came after the Denmark attacks yesterday, so is not a reference to yesterday’s attacks.” (Weasel Zippers)

Westerners care more about Charlie Hebdo, a liberal who mocked Christ portraying the Virgin Mary giving birth to a pig. But all throughout the Middle East, the speculation is quite different, the beach and the waves shaped red, a reference to the blood was a clear message to the Copts in Egypt, a people who are rarely cared for and to Egypt it is about the slaughter of the 21 Christian Copts who were dragged to a beach front in Libya dressed in orange jump suits. The picture shows from ISIS magazine Dabiq, a group of Copts bowing on a beach, which can be linked to the image of the new promotional video issued by ISIS. 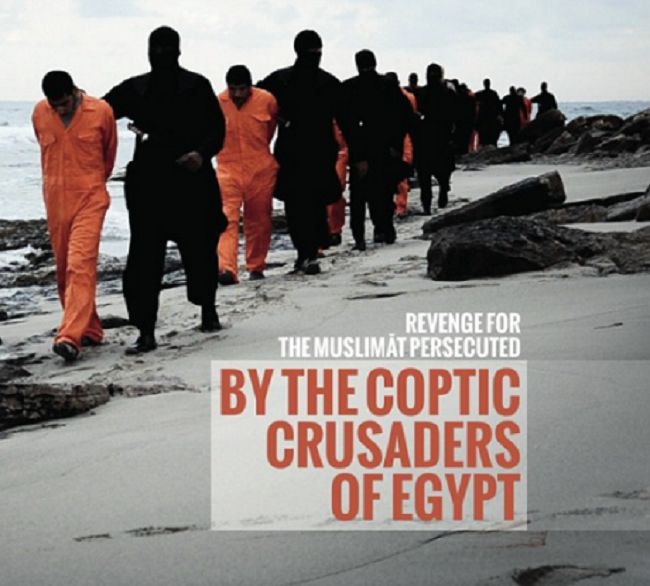 While ISIS did not issue any additional information about the nature of the video and what can be contained, the phrase “Cross nation,” referred to in the Tweet, raises doubts about the fate of 21 Coptic Egyptian kidnapped by a group “Soldiers Of The Caliph” loyal to ISIS in Libya, and who had been abducted from the city Sirte, Libya.

And while the families anticipate the fate of their 21 sons in suffering, I am reminded of Christ’s descending on earth. The two places in Scripture I find Jesus landing to rescue folks are Zechariah 14 and Isaiah 19.

We all know that Zechariah 14 is about rescuing the Jews and converting them to Him, but Isaiah 19 should shock some folks and get us to ask who and why is Christ coming for in Egypt:

“And it will be for a sign and for a witness to the LORD of Hosts in the land of Egypt; for they will cry to the LORD because of the oppressors, and He will send them a Savior and a Mighty One, and He will deliver them.” (Isaiah 19:20)

Here we have the “Mighty One” is the Messiah, who fights on the day of the Lord to fight the oppressors. Here, see for yourself your brothers and sisters in Egypt suffering from the oppressors and calling for Jesus to come down and save them:

Like All Cults, Islam is Built on One Lie After Another

ParentalRights.org and Occupy Hacktivists Working Together

ParentalRights.org and Occupy Hacktivists Working Together