Here again, the calls for murder and war in the cause of Islam comes from a cleric. So again we ask, what is being done to expunge the Quran (and Islam) from the violent teachings that inspire jihad?

The cleric has praised the beheading. 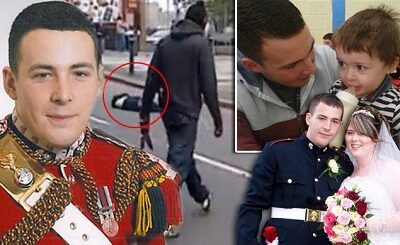 London: The suspects behind the Woolwich beheading of a British soldier were reportedly inspired by the preachings of cleric Omar Bakri Mohammed. According to a secret film, Bakri states that Islam’s enemies are permitted to be decapitated under certain interpretations of the religion.  The radical Muslim cleric has been banned from Britain for his extremist activities and his alleged links to the al Qaeda, The Independent reports.

According to the report, one of the suspects, Michael Adebolajo, a British-Muslim convert of Nigerian origin, had given a video interview where he claimed that he killed Drummer Lee Rigby, 25, as he was fighting for ‘Almighty Allah’.

Michael Adebowale, 22, of Greenwich is currently being considered as another suspect for the crime. Lebanon resident Bakri Muhammed said he had seen the interview, and justified the crime by saying that he understood the feeling of rage that had motivated the attackers.

He said Islam permits such acts as he was not targeting civilians but was taking on a military man in an operation, which is considered to be a courageous and heroic act among Muslims in the Middle East. 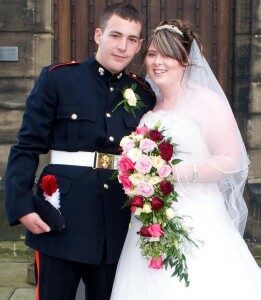 Photo of Lee James Rigby, a soldier horrifically murdered in Woolwich, seen on his wedding day in 2007 to Rebecca Metcalfe.

The report also says that the two suspected killers of Drummer Rigby were already known to British intelligence outfit MI5 and, almost certainly, to counter-terrorism officers in the police, one of whom was not allowed to travel to Somalia to join the Islamist militia Al-Shabaab last year. Muhammed is known to deliver messages on Islamic websites where he addresses Muslims to ‘use the sword to remove the head of the Westerners’ and said he hoped that British Muslims who are in the army in Afghanistan can be captured. Muhammed, however, stated that he and his followers were not involved in violence while residing in the UK, as they had come to be known as the ‘covenant of security’ under which Islamist organizations were allowed to carry out their activities, but desisted from taking armed action in the country which had given them refuge.

Meanwhile, the Independent Police Complaints Commission has said that the shooting had been captured by a council camera and the suspects are in a hospital with non-fatal injuries.

I am sure that a good many Muslims would disagree — I am also sure a good many Muslims would agree, and there’s the rub. Of course we expect people to recoil and reject this savagery. That’s a given. The problem is the Muslims who respect it, adhere to it, and believe in holy war in the cause of Islam. That is our problem. These arguments about peaceful Muslims are a distraction. The argument is irrelevant. No one has an issue with them.

Where are the Muslim protests against jihad and calls for a reformation in Islam (ie Vatican II)? The only demos I ever see by Muslims and their antifa SS army are violent protests against counter jihad groups like SIOE and EDL. Why is that?

ANJUM Chaudhry has claimed most Muslims would agree with what the man believed to be the Woolwich attacker was filmed saying moments after the death of Lee Rigby. Dion Dassanayake, May 23, 2013 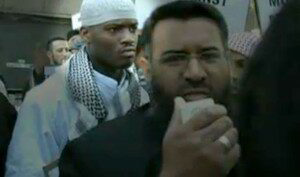 On Newsnight tonight, Chaudhry said while the brutal attack on a serving soldier was shocking what the man covered in blood said about foreign policy explained what he did.Chaudhry, who set up Islam4UK which was condemned in the Terrorism Act 2000, refused to say he abhorred and was horrified by the attack.Drummer Rigby, a married father of a two-year-old boy, died after being brutally attacked in broad daylight by two men in South East London yesterday.He said: “What he said in the clip which is being televised, not many Muslims can disagree with it.”Presenter Kirsty Wark strongly disagreed with the statement, along with his fellow panelists from the Muslim community.Shams Ad-Duha Muhammad, a director at Ebrahim College, said the vast majority of Muslims would strongly disagree with Chaudhry.

He said: “Why is not possible for us as Muslims that we cannot condemn what happened here and air our views regarding foreign policy?”

The man believed to be one of the Woolwich attackers had attended a demonstration held by Chaudhry.

What he said in the clip which is being televised, not many Muslims can disagree with it.

While Julie Siddiqi, Executive Director at the Islamic Society of Britain, said there was ‘absolute condemnation’ from every Muslim organisation.She said: “I want to give my condolences to Lee Rigby’s family.”There is no justification for what we saw yesterday.”The man seen in the video had met Chaudhry before, and attended one of his demonstrations for anti-Western al-Muhajiroun organisation.The clip, obtained by ITV News, shows a bloodied man wielding a bloodied meat cleaver in the street and shouting as stunned eye-witnesses looked on.He says: “I apologise that women had to witness this today, but in our lands our women have to see the same.

“You people will never be safe, remove your governments they don’t care about you.”

Obama: 'Our Plan Worked', Give Me a Second Term