The latest threat to come from the Islamic State is calling for loyal, devout followers of Islam to wield knives on commercial airlines to continue Islamic jihad in the US.

Well, this is something to be concerned about, but only because it is the American people’s rights that are being attacked before they even board an American flight.

It’s also a concern because while law-abiding citizens are unconstitutionally searched and items seized from them, many seem to find a way to bring prohibited items onto flights originating in the united States.

The pro-ISIS group that in January depicted the invasion of Washington and in February declared “Paris before Rome,” depicting a terrorist invasion that began with cells in the countryside outside Paris before attacking the city, circulated a warning online to commercial aviation.

The Al-Abd al-Faqir Media release comes on the heels of a March video depicting a global caliphate, showing a Facebook-style profile of “John Stephen,” a white man with a closely trimmed beard and an image of the White House exploding in flames as his banner photo.

In the new poster, a clean-shaven dark-haired white man sits in the aisle seat during a commercial flight, a knife blade jutting out from his hand.

“You will be an easy prey,” the poster warned in English, French and Arabic.

Here’s the poster that’s being referenced. 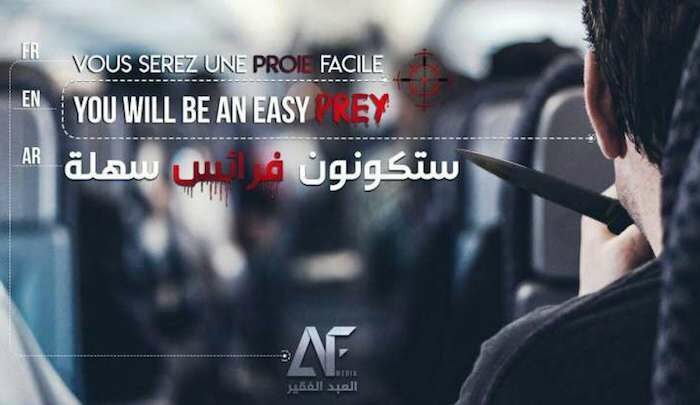 Although I don’t have any faith in the Transportation Security Administration (TSA), which clearly resembles the Nazi Gestapo, I do have faith in the American people that they have not forgotten what Islamic jihadis are alleged to have done on 9/11/2001 with boxcutters.  I don’t really think we’ll let that happen again.

And should a jihadi want to wield a knife on a commercial flight in the US, he’s probably going to be beaten to death with laptop computers, tablets, cell phones, pens or whatever passengers can find, and then he’s going to be pummeled by several people on top of that.

However, seeing that this is in both French and Arabic, perhaps citizens of France and Arab speaking countries are now being put on notice as well.