Jihadists Call For Murder Of US Pastor, Critics of Radical Islam & Heads Of State

Home » Jihadists Call For Murder Of US Pastor, Critics of Radical Islam & US Heads Of State

In the latest edition of Inspire’s, al-Qaeda’s English-language magazine, a feature post on page 10 reads “Wanted: Dead or Alive.” Critics of radical Islam are listed, among them is Florida pastor Terry Jones, who gained recognition for burning Korans and an Obama effigy. 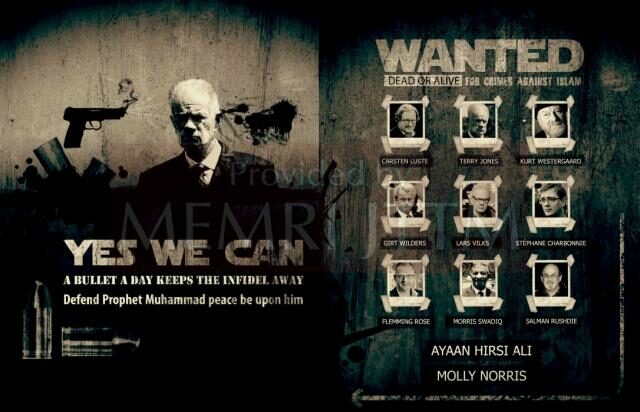 10. Ayan Hirsi Ali, author (not pictured – she does not wear a veil)

While no specific reason is given for their being wanted, except “for crimes against Islam,” I’ll note that Barack Obama’s campaign slogan is neatly positioned reading, “Yes We Can.”

Additionally, the page reads, “A bullet a day keeps the infidel away” and “Defend Prophet Muhammad peace be upon him.” Apparently that is the only person in the religion peace is to be upon, because it certainly is not upon the people in this list.

Additionally, you’ll notice the picture to the left of Terry Jones with a firearm beside his head as though it has been fired and the bullet exiting his head. Note the smoke coming from the gun.

The photo is courtesy of MEMRI (The Middle East media Research Institute). They also released calls to assassinate top U.S., British, and French heads of state and politicians. MEMRI reports, 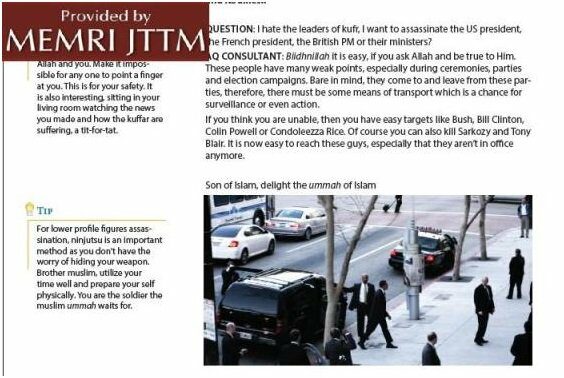 “On February 28, 2013, Al-Qaeda in the Arabian Peninsula (AQAP) released issue X of its English-language online magazine Inspire on the Al-Fida’ jihadi forum. The release comes almost 10 months since AQAP released issues VIII and IX of Inspire on May 2, 2012.[1] The current issue (Spring 2013, 60pp) includes excerpts of an exclusive interview with American-born Al-Qaeda operative Adam Gadahn, in which he speaks about the Arab spring, as well as a letter by American jihadi Samir Khan, who was killed in Yemen in September 2011 in a U.S. drone strike. The issue also contains previously released messages from Al-Qaeda leader Ayman Al-Zawahiri and slain Al-Qaeda commander Abu Yahya Al-Libi.

Additionally, AQAP lists some upcoming productions, including a video titled “Lamenting the Loss of Sheikh ‘Adil ‘Abbaab,” which, based on its title, will confirm Sheikh Al-‘Abab’s death. The latter was reported killed in a drone strike in Yemen in October 2012.[2]

Also noteworthy in this issue are the two new public keys AQAP provides for secured communication with the group. The issue also features a new segment in its Open Source Jihad (OSJ) section, in which an Al-Qaeda “consultant” answers queries pertaining to lone-wolf attacks.”

As for Jones, he has already been condemned and sentenced to death by an Egyptian court for burning Korans. However, now he along with other outspoken critics of jihadists are openly being targeted. While some people are saying that this sort of language is a part of free speech. I beg to differ. Death threats are not protected speech and no one has a right to issue death threats of this nature. If you think differently, perhaps you should study history and find out the intent of freedom of speech.

If you would like to support Jones in his stand against radical Islam, you can donate here. Also Dr. Terry Jones will be speaking at the 2013 conservative Call to Action Issues and Action Forum in Colorado Springs, Colorado on March 23, 2013. You can find information on that by going here.