Joe Biden: 'We Don't Have Time To Prosecute Everybody Who Lies' On Background Checks

So the Federal government wants to put more gun control legislation on the books, but they don’t want to enforce the current laws. Barack Obama wants universal background checks on guns, but doesn’t seem willing to do his job when it comes to enforcing the laws behind background checks. This came out during a meeting between Vice President Joe Biden and Jim Baker of the National Rifle Association. According to an interview that Baker gave with the Daily Caller, he said that Biden told him, “regarding the lack of prosecutions on lying on Form 4473s, we simply don’t have the time or manpower to prosecute everybody who lies on a form, that checks a wrong box, that answers a question inaccurately.”

Baker also said he was only given five minutes to present the NRA’s concerns and approaches to prevent massacres like the shooting that took place in Newtown, Connecticut. While He pointed out the low number of prosecutions for information falsification and the low felony prosecution rate for gun crimes, it didn’t seem to sway Biden in the least.

According to the Bureaus Federal Firearms Regulations Reference Guide, anyone submitting false information on ATF Form 4473 commits a felony punishable by up to ten years in prison.

One would think that with the administration’s call to “get the guns out of the hands of criminals,” that they would be genuinely interested in prosecuting said criminals, but as reported earlier, this administration simply wants to go after guns. They are not interested in enforcing the law, which by the way, is their job as the Executive Branch.

In a report titled Enforcement of the Brady Act, 2010: Federal and State Investigations and Prosecutions of Firearm Applicants Denied by a NICS Check in 2010 that was authored by Ronald J. Frandsen and funded by tax payers through the U.S. Department of Justice and received in August of 2012, there was a report of 72,659 applications to purchase firearms that were denied (See Table A below). 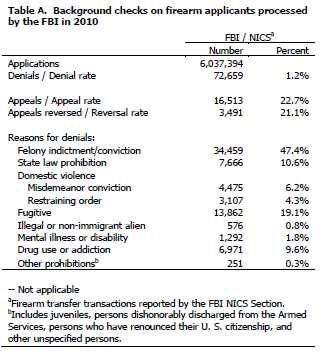 National Instant Criminal Background Check System reported that the most common reasons for denial fell into three categories. Thirty-four thousand four hundred fifty-nine denials for felony indictment or conviction were issued, making it 47.4% of the reason for denial of applications to purchase or transfer a firearm. Another 13,862 were denied because of being a fugitive, which amounted to 19.1% of denials. Finally, 7,666 people had their application denied because of State law prohibition, which made up 10.6% of denials.

In delayed denials, according to the report, “the agent contacts the firearm purchaser and seizes or takes an abandonment of the firearm or coordinates a transfer of the firearm to a licensed dealer or to a third party who is not a prohibited person. In POC states, a retrieval may be handled by local law enforcement, a statewide firearms unit, or ATF. In addition to the delayed denials, a small number of 2010 standard denials potentially involved unlawful firearm possession. Field offices investigated a total of 1,923 unlawful possession cases that began in 2010. A retrieval of a firearm (or firearms) from a prohibited person by field agents occurred in 1,164 (about 61%) of the cases. The subject of the investigation was cleared in 509 cases (approximately 27%). About 93% of the cases had been resolved by December 13, 2010, with the subject missing in nearly 7% of the cases.”

However in the chart that follows that assessment, they indicate that 128 of those delayed denials they were unable to locate and 122 had other outcomes. Together they total 13% of delayed denials, which means that at the least a little over half of those still possess the firearm they acquired.

When it comes to actual prosecutions by U.S. attorneys, here’s how the numbers break down. In Table 4 below these are the numbers of cases that the ATF declined to refer for prosecution and the reasons why.

Table 5. shows a total of 62 cases in 2010 that ATF referred for prosecution. Note the reasons for the referral.

Table. 6 shows that out of these 62, only 44 of those were prosecuted.

Caroline May at the DC reports the responses of the NRA representatives to Biden’s comments and the Justice Department’s lack of prosectution:

“We think it is problematic when the administration takes lightly the prosecutions under existing gun laws and yet does not seem to have a problem promoting a whole host of other gun laws,” Baker told The DC.

“They don’t have time to pursue people who are dangerous, who aren’t supposed to get guns, and the message they have sent is literally ‘Good luck, go get them elsewhere,’” Chris Cox, the executive director of the NRA’s Institute for Legislative Action, said in an interview with TheDC.

Just keep this in mind when the Obama administration comes out trying to talk about “respecting the Constitution” and saying, “I’m not going to take your guns.” They do this in the midst of talking about keeping guns out of the hands of a few criminals, but they are failing to follow through with prosecution of the law and that isn’t a biased opinion, it’s the words of Obama’s vice president.

As I’ve said before, the real issue here is not safety. It’s not about “the children” and it’s not even about a few people with semi-automatic rifles, it’s about a direct assault on the Second Amendment. I just wonder when we are going to be getting a full and complete background check on the man occupying the Oval Office.

UPDATE: I received a CC on an email from Colorado Sheriff Ron Bruce in which he really let’s Vice President Joe Biden have it. Bruce writes:

These actions are 100% bullshit (a word I knew you would understand). My Sheriff’s Office will oppose these processes with all our might and will encourage our residents to do the same thing. This does absolutely nothing to protect anyone. The federal government has failed to enforce hundreds and perhaps thousands of gun laws currently on the books. This has nothing to do with protection but has everything to do with subjugation.