If anyone has paid attention to any of my articles, it is quite obvious that I am an animal lover. Over the years, I have had many pets from a chicken to a horse. Right now, the menagerie consists of “the terrorist princess,” 1 yellow tabby cat and 3 others of various colorings that found a residence here instituting “The Home for Wayward Cats” designation. One type of pet I have never warmed to has been lizards. They do not seem particularly interactive or have a definitive personality and cuddling with a creature that has “leathery skin” doesn’t appeal to me whatsoever. However, it seems that Obama and the State of Arizona really loves lizards – chameleons to be exact. John McCain, that pesky little RINO, can change his colors as swiftly as a chameleon lizard needing to hide from a predator. 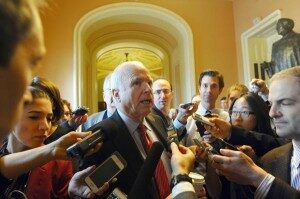 Just last September, McCain (R-AZ) blasted Ted Cruz and other Republicans for even thinking about the repeal of Obamacare. He even told CNN news, “I can tell you, in the United States Senate, we will not repeal or defund Obamacare. We will not and to think we can is not rational.”

It seems that on Wednesday, Sen. John McCain called for the “total repeal” of Obamacare.

According to The Blaze:

McCain outlined his “solution” during an interview with Greta Van Susteren, which culminated in an admission that the law should be repealed completely.

“The solution is, first of all, to let people keep their insurance if they want to,” he said. “Or at least reinstate them.”

He continued: “Second of all, let the insurance companies give a menu of whatever they want to provide. Third of all, medical savings account. Fourth of all, medical malpractice reform. Let people go across state lines to, in order to, if they can get a better insurance policy in another state. And remove this whole tax incentive for employers to provide employees health insurance.”

“That is repeal,” Van Susteren said, pointing out the obvious.

“That’s exactly right,” McCain replied. “That is total repeal in every other way. Because what Obamacare is, is an experiment in social engineering – in other words, making healthy people pay more … in order to subsidize the health care for people that are older and unhealthy. That is the ultimate in social engineering.”

It doesn’t appear that McCain misspoke in calling for full repeal of the Affordable Care Act as the TV producers seemingly placed the caption “Sen. John McCain Calls for Total Repeal of Obamacare” on the screen before he actually did, hinting that it may have been planned.

This is the same John McCain who touted that Americans spoke on Obamacare with the re-election of the Liar in Chief, who argued that Republicans lost the fight to repeal this atrocity, and said lawmakers should continue to try to “repair Obamacare.”

This does not surprise me at all from someone like John McCain – a man who believes in nothing will fall for anything. He’s changing his position to win favor since it’s time to start campaigning to keep seats in the Congress. This man follows the breeze like a piece of paper in the wind. He’s a wolf in sheep’s clothing; however, he ditched the sheep’s clothes long ago and he’s trying to get back in them. Too late McCain. You have already exposed your RINO tendencies and if you had not had your nose up the anus of both Reid and Obama, you would have noticed that Americans see you for what you are. 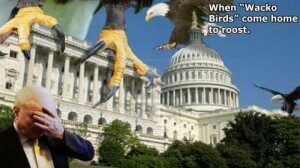 McCain called the Affordable Care Act “an experiment in social engineering.” Did you catch that? Social engineering when used by a RINO or Democrap signals socialism/communism and total control over the people whereby they, as the ruling party, remove freedom and liberty from the masses while keeping it for themselves. It should be obvious this is the intent as Congress has a nasty habit of exempting themselves from the law time and time again. McCain himself supports terrorists, even stopping to pose for a photo-op with them. Any average American would be declared a traitor and great lengths would be taken to kill them with a drone without the constitutional due process. But, McCain gets a pass being a US Senator, a RINO to boot.

Since Obamacare has been passed, Americans who know the Constitutional limits of the federal government have stated Obamacare as outside the enumerated powers. These individuals also saw in Obamacare the law’s ability to remove individual freedom and privacy along with violating an individual’s basic patient rights when receiving healthcare. McCain supported all these gross violations of the government by supporting the ACA. Video is a wonderful tool.

No, John McCain has to jump ship along with his fellow Democraps in order to save face to keep his seat of power. Many Americans will see this for what it is; others will cheer that a false savior has come forward, letting him slide on his gross violation of his oath. This man is counting on the stupidity of the people of the State of Arizona, the propaganda machine that is the lame stream enemedia, and the apathy of those American who have given up fighting against the Democrapic Socialist takeover of this country to keep him in power; he wants to continue screwing the public without having to display the remotest hint of caring for this country. He’s done it in the past and he’ll do it in the future.

As my Dad is fond of saying, “A leopard doesn’t change his spots.” Well, remember, McCain is not a leopard; he is a chameleon. A lizard who changes color to match the background of its environment. Whatever the atmosphere that is most advantageous for McCain will be the “color” he chooses to display in order to protect his position. Right now, that color happens to be the repeal of Obamacare.