Jordanian Pilot Burned Alive by ISIS – Will Not Submit!

The Jordanian pilot from the U.S. led-Coalition Muath Al-Kassasbeh is arrayed in front of armed terrorists as if this was part of a Roman arena, to be caged like an animal, and then with professional filming as if it was scripted from a Hollywood movie on how the ancient Romans entertained themselves with human suffrage during the dark pre-Christian history.

But this is Muslim reality TV at its best, a plunge into the dark history of Islam. The POW pilot is then soaked with petrol and set on fire while professionaly filming his slow suffering as a sacrificial offering to Allah and with no remorse to the screaming and melting of a human being. This is not something we suggest you watch, but ask: how can the world stand idly by while we see this and still think that Islam is a peace loving religion?

WATCH AT YOUR OWN RISK. IT’S PROBABLY THE WORST THING YOU’VE EVER SEEN. IT’S HORRIFYING.

And so the method on how to kill Al-Kassasbeh was not some dreamed up concoction, but stemmed from Islam as the quest on how to execute him circulated the Muslim world. In the burning scene video (see 1:00 above) ISIS gave the Islamic edict straight from the top Islamic authority of Ibn Taymiyya’s jurisprudence:

“So if horror of commonly desecrating the body is a call for them [the infidels] to believe [in Islam], or to stop their aggression, it is from here that we carry out the punishment and the allowance for legal Jihad” 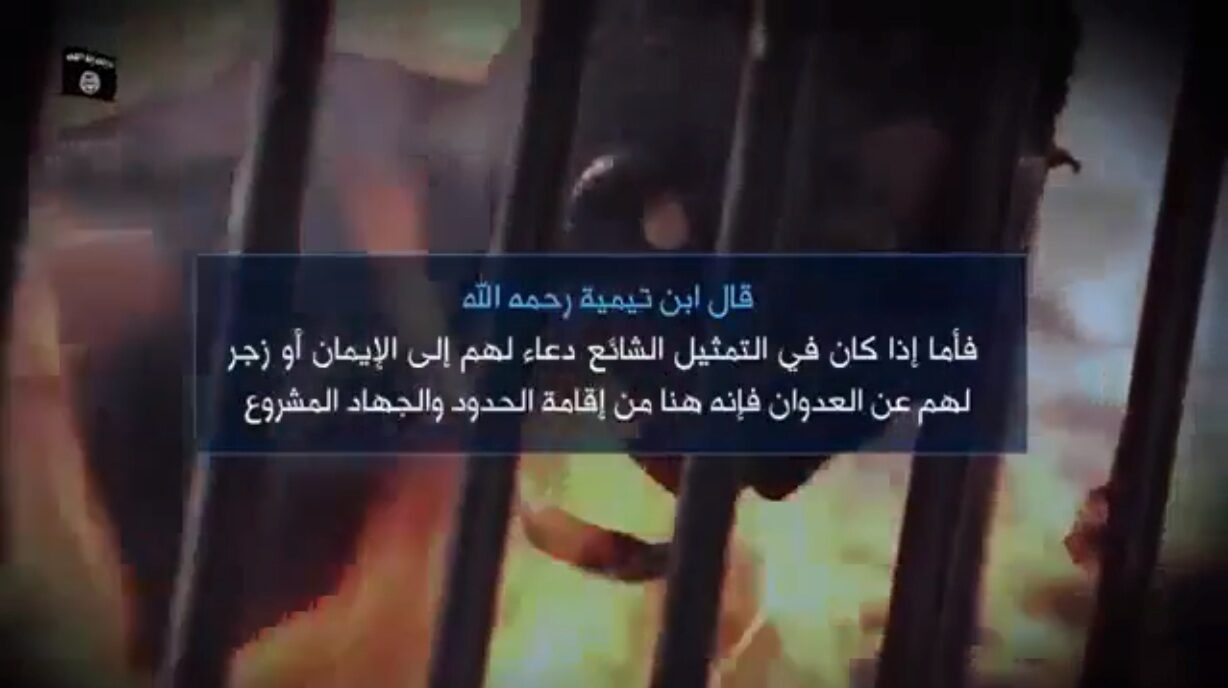 Translation: “Ibn Taymiyya, may Allah have mercy on him said: So if horror of commonly desecrating the body is a call for them [the infidels] to believe [in Islam], or to stop their aggression, it is from here that we carry out the punishment and the allowance for legal Jihad”

To desecrate the victim while alive is part and parcel of Islam in hope that people would convert through sheer fear or to repulse the enemy. 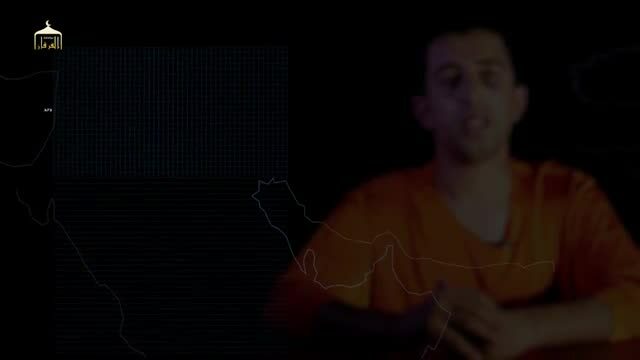 We were able to secure the extended video released by the Islamist Al-Furqan which spills out the intelligence plans of U.S.-Led coalition: airstrikes, airport locations, logistics, including a list of Jordanian pilots asking Muslims to target and execute them:

We will not completely translate the video, but unfortunately, the intelligence material has already been dessiminated in the Arabic language.

The Jordanian Parliament met and were irate:

“They burned him while he was alive” screams one parliamentarian.

“All ISIS are enemies … we will avenge … we will get them all in Jordan and all who support them …”. 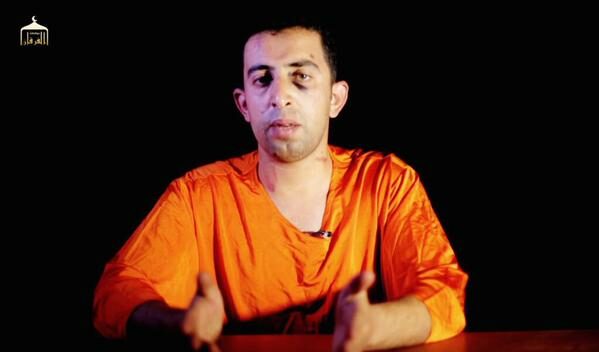 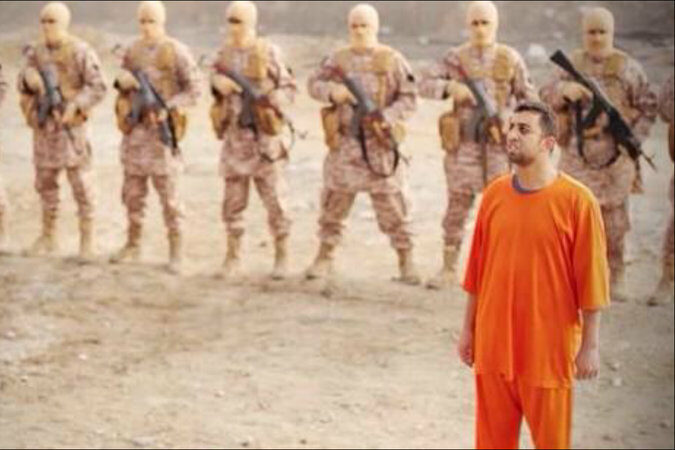 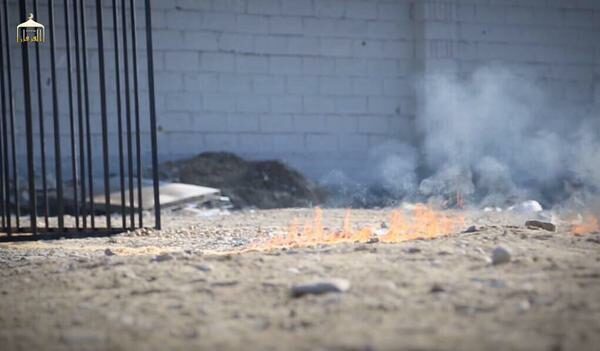 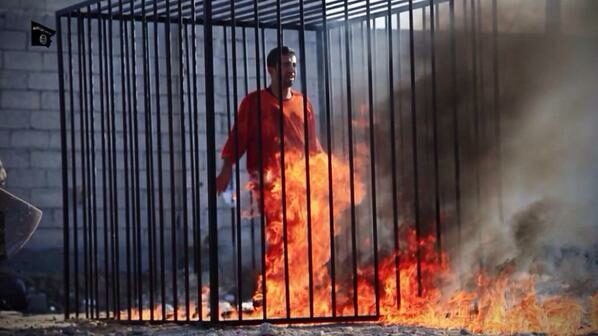 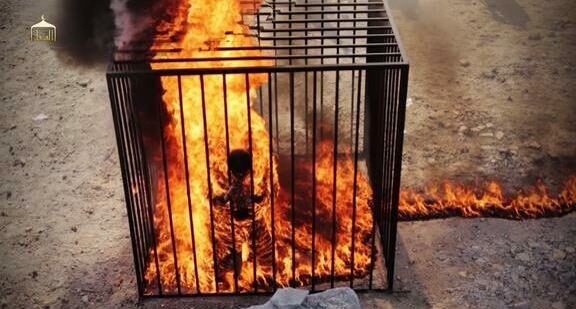 CNN announced that “The images, produced by ISIS’ official al Furqan media company, appeared online Tuesday. But a banner on Jordanian state TV said that al-Kassasbeh was actually “martyred January 3″ — a month ago.”

We have maintained last month that Al-Kassasbeh was most likely executed already and we were right. We posted on January 4th the following:

“A Youtube video claimed to be from the Islamic State ISIS (the user posted it under Al-Khilafa Al-Islamiyeh, Islamic State, ISIS) focusing on the Jordanian pilot Moaz Safi Yousef al-Kassasbeh who is held by Islamic State (ISIS) terrorists in Raqqa that gives the judgment of execution stating “cut off his head” as judgment being passed from a Sharia perspective that this is the punishment of the pilot and all the pilots who are captured. They also stated that regardless that al-Kassasbeh read the Quran he will get the punishment of Riddeh (considered a defector from Islam) for “aiding and abetting the crusaders” (the Americans) which they pledged to behead any U.S. pilot who is caught. The message is meant to be a warning to all U.S.-led coalition.”

And on December 27th last year, Shoebat.com, a week prior to the actual execution, we reported that ideas on how to desecrate the pilot’s living body began to trickle to ISIS when it asked the Muslim public to suggest, based on Islamic law, the different horrific methods, not just of desecrating a dead, but a living body while still alive. Shoebat.com pre-warned about this (see below), that such methods are on the way, especially when it comes to the execution of the Jordanian pilot which we wrote about a week prior to the execution:

“If you think ISIS’s killing methods are bad wait till you see what one video in Arabic done by a Muslim lady dressed in a Hijab circulated to Muslims worldwide. The video was a complaint to Caliph al-Baghdadi of ISIS as “the call of Muslim mothers” arguing that such methods as “beheading” and “shooting” are just too humane and will not work to stop the U.S. led coalition air raids which she complained that this is persecution against her living in Syria. To eliminate the attacks she suggested that an Ottoman method of execution be used to detract pilots from joining the coalition against ISIS. She suggested to use the captured Jordanian pilot Moaz Kasasbeh and begged not to execute him mercifully by using a bullet or a knife, but begged them to reinstitute the Khazouk.”

Obviously, they opted for cage-burning. Believe us, we warned about Muslim cannibalism prior to when Muslim cannibals ate hearts and cooked heads, what will also be coming from ISIS, in the pipeline, is the Khazouk.

Everyone in the Middle East knows three things told to them by their grand parents about the Ottoman Turks and what they spread throughout the Middle East: Sihr “sorcery,” Baksheesh “bribery”, and the Khazouk which is a spike driven through the victim’s rectum, which the Ottomans used to terrify locals and deter potential insurgents. And this is exactly what this lady wanted to reinstitute:

Khawiskou “impale him” she cries out “then send him to his mother” says the peace-loving Muslim lady.

“Why are the Arab world fighting us. We are Muslim doing the will of Allah”.

“I am pleading [ISIS] to honor my special request that you Khazouk him “impale him” and post it all over the social networks and the media”. 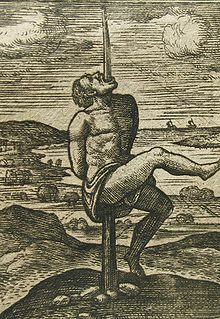 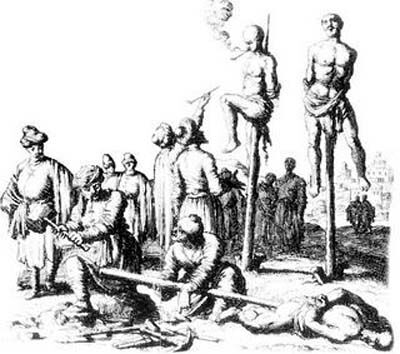 Executing someone and desecrating the body alive is not something that only existed in far history, it was a reality under the Turks until the Christians gave a crushing blow to the Ottoman beast after World War I when Khazouk executions were part of daily life. One TV series reminds how the Ottomans, in order to thwart dissidents used this horrific type of execution:

Such brutality has come to the world from an Islamic edict by Ibn Taymiyya, one of the highest authorities on Islamic jurisprudence, and will be emerging as we see neo-Ottomanism revive in which the world will become as we see in the movie Apocalypto with all the heart plucking cannibalism including burning and khazouking Christians and other victims.

As we learned in school when I lived in Bethlehem of Judea, the Ottomans were creative when it came to all sorts of weirdities. At times they used the hot poker, a red hot metal rod that is inserted through the anus which the expert executioner is able to avoid puncturing the heart and the victim could live up to two days before he dies since the bleeding is minimized as the hot rod caterizes the wound.

But as it seems, some are begging to revive the Khazouk in revenge against the U.S. led coalition pilots. But to this lady, the Khazouk is no fantasy, she is serious.

The West does not understand such tradition as a Muslim woman making such an appeal.

A Muslim woman’s appeal stems from In Ibn Athīr’s famous history book al-Kāmil, he mentions the story in our history of a King called al-Mu’tasim, who was from the Banū ‘Abbas. The event goes like this; A Muslim woman was captured by the Romans and imprisoned, so the Romans laughed at her. The leader of the Roman king sarcastically said, “You won’t ever leave this place until the muslim king himself removes you from these shackles.”

The woman shouted “Wa Mu’tasima!” [Oh my grief, Mu’tasima!]. The Roman King laughed at her and said: “He will never come to save you unless he was riding “ablaq” a black and white horse. He said this in a way of mocking her and showing the impossibility of the situation.

When al-Mu’tasim heard of the news, he gathered a whole army and made the entire army ride the “ablaq” horses and defeated the Romans (who in this case are viewed as the U.S. and Europeans) and himself entered the prison where the Muslim woman had been imprisoned. “Who are you?” she said.”I am al-Mu’tasim.” He freed her from her shackles, a sign of humiliation for the Romans.

The Muslim mind stems from a pre-Christian dark history and desires to plunge the world to these times. And this became the issue that when a Muslim woman calls upon the Caliph for help he must comply. The Muslims always use this story al-Mu’tasim, a call of a Muslim woman’s appeal in Jihad must be honored and in this case, the hot poker, but as we see the winner was burning inside a cage.

Islam is a cage, whether the individual selects such a religion, imprisons and burns others, burn themselves, or burn eternally in hell, Muslims need to make a choice and the choice needs to be made now: convert to Christianity and avoid eternal hell fire.

“Do not store up for yourselves treasures on earth, where moths and vermin destroy, and where thieves break in and steal”.CONSIDER DONATING TO RESCUE CHRISTIANS