Just How Much Did Cliven Bundy Actually Owe? See The Document For Yourself – It Wasn't Millions

Last week, as the trial of Cliven, Ammon, and Ryan Bundy, along with Ryan Payne got underway, we reported on bombshells that were dropped by government witness Mary Ann Rugwell (my apologies for misspelling her name in the previous report), in which she testified that the Bureau of Land Management was not only supposed to merely round up the cattle and give them back to the Bundys, but that Cliven only owed $8,815 in trespass fees over ten years, not millions.

Just so we’re clear, even Fox News continues promoting the narrative that the Bundys owe millions to the government.

Take a look at this recent report from last week.

However, the truth is that documents are clear that the money owed was less than $10,000 before the feds got involved.

First, take a look at this letter from the Bureau of Land Management dated January 21, 2011 (courtesy of Redoubt News). 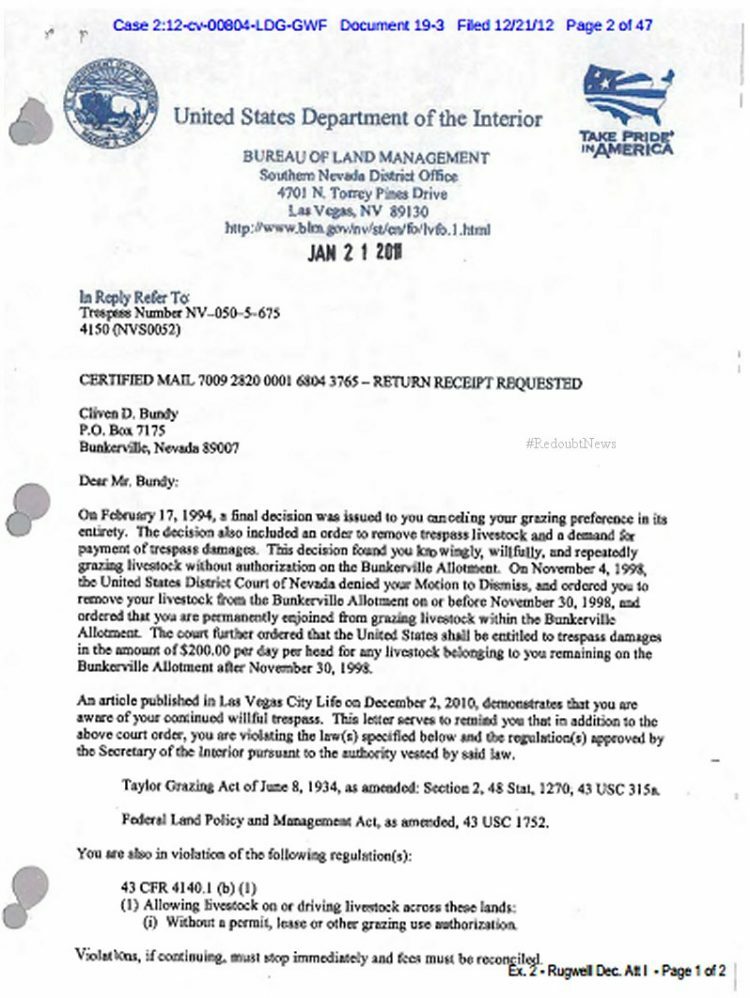 Notice the government claims that because Bundy’s cattle wandered on to land that the US government claims they own, even though they don’t own it constitutionally.  Furthermore, Bundy was charged $200.00 per head of cattle for “trespassing damages.”

One has to ask what damage was actually incurred by those cattle wandering onto that land.  How did they arrive at a price of $200.00 per head of cattle?

The letter cites part of the US Code to claim Bundy was in violation of the law, and makes mention of an article in Las Vegas City Life that “demonstrates” he was “aware” of  “continued willful trespass.”

Again, the obvious question, pertaining to the Constitution is, by what authority did the US government claim that land was their’s in the first place.  I’ll remind you of that in a moment. 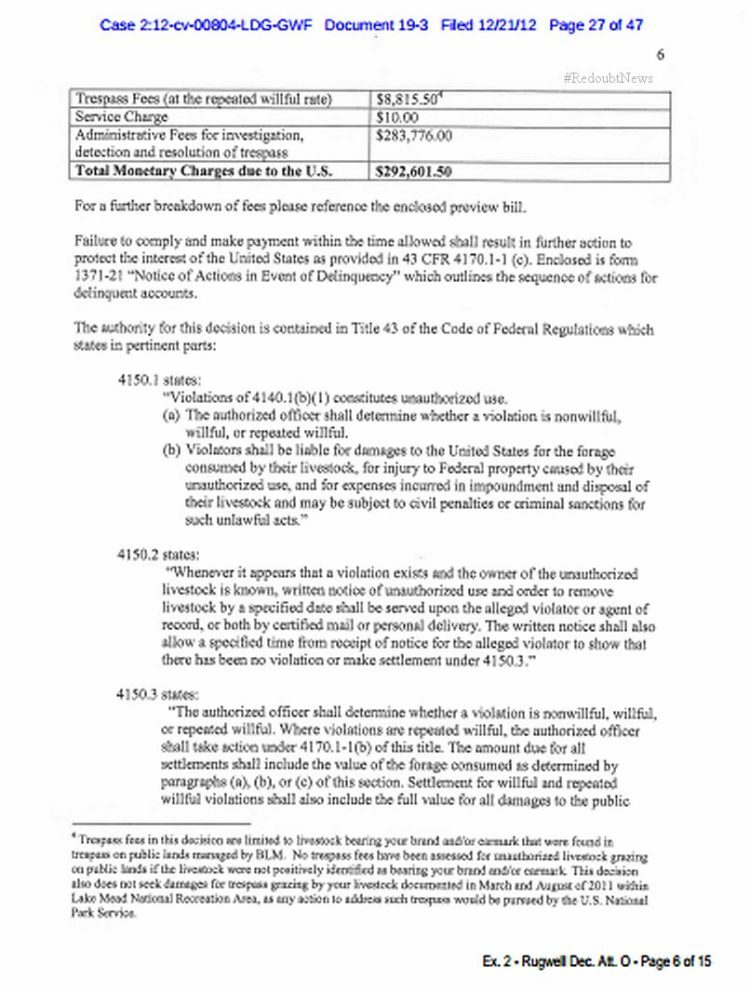 Of course, they are tacking on a $10.00 service charge for sending him a bill, but then they add in $283,776.00 in administrative fees for “investigation, detection and resolution of the trespass.”

No, seriously, on the US government could think they could get away with something so ridiculous.

How much time and money does it actually take to verify is cattle wandered off a portion of land onto another portion of land?  How many people would have to actually be involved in that process?

Part of those “administrative costs” was $44,542 for helicopter flight time.

Also, the periods of time for confirming cattle on the land seem to be seriously inconsistent.  Thanks to documents from Shari Dovale, I was able to see on page 31 of documents submitted to the court that there was a period of time from 03-21-2011 to 08-19-2011 in which cattle were allegedly discovered and fees of $6,562.50 were charged, but only 37.50 in administrative fees.

After that, virtually every other charge stemmed from a one-day event.  Administrative fees ranged from $33.00 to $40.50.

There is no explanation for the up and down of the admin fees.

What are the rest of the “administrative charges” being assessed?  Those are never broken down.

In the real world, only one person and it might take a couple of hours, including travel time.  That’s a far cry from nearly $300,000.00 in administrative fees!

Even at nearly $300,000 in fees, none of this is what Fox and the rest of the mainstream media have been reporting.

“Though the grazing fees are not the central part of the trial, it certainly is a major point for the public,” wrote Dovale.

That’s correct.  In the mind’s of the public, the Bundys have been painted as hardened criminals and a threat to society owing millions of dollars.

This record proves the government and media narrative surrounding that is blatantly false.

Keep in mind that the Bundy family had been ranching this land for 150 years, long before there was a Bureau of Land Management.  It’s been in the family for generations, and the thing they feared most was a government usurpation of that land in declaring it a national park, something the central government does not have authority to do in our Constitution.  Yet, just before leaving the office he usurped, Barack Hussein Obama Soetoro Sobarkah declared the land to be a national monument.

As far as the constitutionality of land ownership, I’ve addressed that before, which you can read here, and so has Ammon Bundy when he schooled former Fox News talking head Megyn Kelly.