Kansas Governor Sam Brownback has written a letter to President Donald Trump, asking him to pardon two Kansans, whom the Obama administration’s policies abused their rights protected under both the US Constitution’s Second Amendment, as well as the Second Amendment Protection Act of Kansas.

The letter was written by Brownback in February on behalf of Shane Cox and Jeremy Kettler. 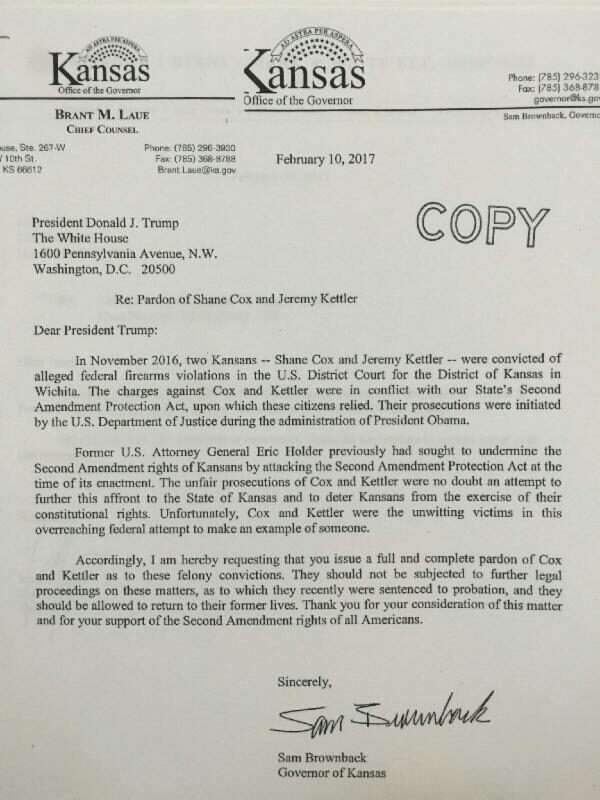 “In November 2016, two Kansans — Shane Cox and Jeremy Kettler — were convicted of alleged federal firearms violations in the U.S. District Court of Kansas in Wichita,” Brownback wrote.  ” The charges against Cox and Kettler were in conflict with our State’s Second Amendment Protection Act, upon which these citizens relied.  Their prosecutions were initiated by  the U.S. Department of Justice during the administration of President Obama.”

“Former U.S. Attorney General Eric Holder previously had sought to undermine the Second Amendment rights of Kansans by attacking the Second Amendment Protection Act at the time of its enactment.  The unfair prosecutions of Cox and Kettler were no doubt an attempt to further this affront to the State of Kansas and to deter Kansans from the exercise of their constitutional rights.  Unfortunately, Cox and Kettler were the unwitting victims in this overreaching federal attempt to make and example of someone.”

I agree.  It is tremendously hypocritical as Eric Holder was, at the time, found to be in contempt of Congress for withholding information from the people concerning the unconstitutional ATF, under his oversight, to conduct illegal gun trafficking to Mexican drug cartels in Operation Fast and Furious.

“I am hereby requesting that you issue a full and complete pardon of Cox and Kettler as to these felony convictions.,” pled with President Trump.  “They should not be subjected to further legal proceedings on these matters, as to which they recently were sentenced to probation, and they should be allowed to return to their former lives. Thank you for your consideration of this matter and your support of the Second Amendment Rights of all Americans.”

The Second Amendment ends by stating that the “right of the people to keep and bear arms shall not be infringed.”  Furthermore, our Constitution does not provide authority to the Congress to legislate against the manufacturing of guns or suppressors.  It simply is not within their scope of authority.  That means since there is no legitimate law that can be made under our Constitution regarding this matter, Eric Holder and his Justice Department were administering tyranny against these two men, not justice.

The AP reported on the men being found guilty back in February.

A federal judge spared from prison two Kansas men convicted of federal firearms violations after taking into account Monday their mistaken belief that a Kansas law can shield from federal prosecution anyone owning firearms made, sold and kept in the state.

Jurors in November returned eight guilty verdicts against Cox, the owner of the now-closed Tough Guys gun store in Chanute, under the National Firearms Act for illegally making and marketing unregistered firearms, including a short-barreled rifle and gun silencers. Kettler was found guilty on one count of possession of an unregistered silencer.

As convicted felons, neither man is allowed to own or possess a firearm.

So, President Trump, you say you are all for the Second Amendment, and people have believed you.  Now, it’s time for you to step up and put your money where your mouth is.  As president, you are given authority to issue a pardon for these men based on the plain language of the Second Amendment that the Holder/Obama Justice Department acted unlawfully to prosecute these men.  You have the authority per our Constitution, to simply set them free.  Will you do so?