“They removed eyes, ears, nose. They get your hand and sharpen it like a pencil then they tell you to write your name with the blood.”

So reported the Daily Mail.

“The Muslims who stormed the Kenyan shopping mall reportedly burnt victims’ faces and cut off their hands in an attempt to conceal their identities before piling the bodies up by the main door to slow the progress of the rescue teams. One security officer said the mall had been turned into a slaughterhouse (an abattoir) within half an hour as the jihadists went on the rampage.” 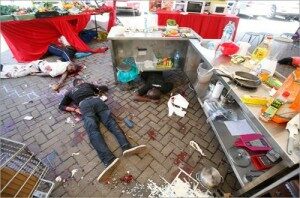 Warring Muslims – this is warfare, the likes of which the West has not seen since the darkest days of Nazism and communism, and the elites cover for these bloodthirsty savages. Those of us who are fighting this scourge are the bad guys.

Which is more monstrous: these devout Muslims slaughtering in the cause of Islam or the media’s cover-up of the motive? No media are reporting this, with just a few exceptions. They are portraying the jihadists as thrill-seeking youth pursuing “the real Disneyland” of African jihad. They refer to these savages as “militants” and “gunmen.”

Think of it. The media are self-enforcing Shariah: “Islam,” “Muslim” and “jihad” have been censored from 90 percent of newspaper reports on the Kenya and Pakistan attacks, despite the murderers’ exhortations.

Stunning. Imagine omitting “Nazi,” “Third Reich,” etc., from press accounts of World War II. This is civilizational suicide. We are covering for our executioners. And if anyone thinks that this appeases or satiates the enemy, they are delusional. This empowers them – the sanction of the victim.

Under the blasphemy laws under the Shariah (Islamic law), you cannot criticize Islam. You cannot say anything that would offend a Muslim (even if it’s true). This is Shariah in America.

The Telegraph declared in a headline Friday, “After Kenya, no more turning the other cheek to those who hate us.” Really? The cheek has already turned. And this declaration is posted in a U.K. newspaper, a country that banned Robert Spencer and me for speaking against this very thing. I didn’t see the Telegraph running editorials or stories in support of our visit. To the contrary, the media were viciously against Robert Spencer and me and published defamation and libel pieces smearing our good name. So forgive my contempt for this half-hearted rebuke to savages. It is the enemedia that has sanctioned and emboldened the jihadists, and continue to do so.

Allison Pearson of the Telegraph goes on to describe the devout murderers as maniacs. Those maniacs are “martyrs” and are exalted as such in many corners of the Muslim world. One only has to watch “Palestinian” TV to see the daily parade of mass-murderers heralded as heroes and martyrs. Or is that OK because it is Jews whom those Muslims are killing?

Pearson wants to know: Where is the Muslim condemnation? Oh, it’s coming, my dear, and it will be condemning you.

Don’t get me wrong, this was a good column, but it was casting pearls before swine in the pigs’ own pen.

And the Hamas-tied Council on American-Islamic Relations, or CAIR, which insists that it speaks for American Muslims and claims that it is America’s largest “Muslim civil liberties advocacy organization,” responds to American Muslims going to Africa to monstrously slaughter non-Muslims by saying, “Who cares?”

Who cares? Civilized men care. The dead care. America cares. The victims care. Their families care. Freedom-loving people care. Defenders of freedom care. These are elements in our midst that wish to murder and maim as many infidels as possible in the cause of Islam. We care.

The congressional ban that prohibited the FBI from interacting with Hamas-CAIR should be expanded to all law enforcement agencies. We wouldn’t want them colluding with al-Qaida, either. It’s the same thing.

The facts are that American Muslims took up arms to slaughter non-Muslims at an upscale shopping mall in Kenya. American Muslims joined a multinational force of Muslims to wage holy war in Kenya. The jihadis attacked American and Jewish shops. The jihadis cut the hands off the bodies of their victims and burned their faces. The killers chanted, “Our mujahideen are prepared to die for our cause!”

Hostages and victims were told “all Muslims leave … we only want to kill non-Muslims”: They released anyone who could prove they were Muslim by reciting a prayer. Women and children were slaughtered if they could not recite the Quran or name the mother of the Prophet Muhammad.

So why didn’t even one Muslim scream out Muhammad’s mother’s name and give the answer to those being executed?

We are constantly schooled by Muslims in every media outlet say that these actions do not represent Islam. And yet no Muslim confronted the jihadists in Kenya about their “misunderstanding of Islam.”

And all was taking place as more than 100 Christians were slaughtered in a historic church in Pakistan packed with Sunday worshipers, while 140 were murdered in Muslim attacks on Christians in Nigeria – all on the same day, all in the cause of Islam. While this unimaginable slaughter was taking place, Muslims were marching down Madison Avenue in New York City waving the black flag of jihad.

All this horror is reminiscent of Muhammad. After the Jewish Banu Quraiza tribe surrendered to Muhammad, Muhammad slaughtered all of the adult men (judged by pubic-hair growth). Their women and children were enslaved and sold.

“At the Massacre of Khaybar, Muhammad brutally tortured a Jewish chieftain for extracting information about where he had hidden his treasures. When the treasure was uncovered, the chieftain was beheaded. This chieftain was the husband of the most beautiful Jewish woman of Khaybar, the 17-year-old Safiyaah. Safiyaah’s family members had been annihilated by Muhammad at the Banu Qurayza massacre. Now having beheaded her husband, the Prophet took Safiyah as his sex-slave and copulated on the same night.”

And then Reuters reported last Tuesday that “members of the largest ethnic Somali community in the United States expressed frustration on Tuesday, fearing a backlash after the attack on a Kenya shopping mall by a Somalia-based Islamic group that has recruited fighters in Minnesota.”

How dare they? The blood has just been spilt, and instead of introspection and re-evaluation, the Somali Muslims in Minneapolis are playing the victim card, constructing out of a whole cloth a fictitious narrative with which to attack and silence us. This is the second wave of jihad. First murder, and then the victims have to apologize. And the quivering, craven enemedia lap this up like hungry wolves.

There is a problem, and what are they doing about it? Law-enforcement officials know of at least 20 Somali Muslims who have left Minnesota to join al Shabaab’s jihad in Somalia. Some have died there.

No, instead they are grievance mongering on the heels of mass infidel slaughter. Vile and monstrous. Right on the heels of the Kenya slaughter, the devout Muslim group, Boko Haram, gunned down dozens of students as they slept in dormitories and torched classrooms. And still Obama will not designate this group a terrorist group.

And the U.S. government should stop importing these jihadists. Minnesota is now home to more than 50,000 Somali Muslims. Stop importing jihad. AFDI has called for the end of this immigration in our 18-point platform. Where are the U.S. politicians who will finally step up? Or do jihadis have to commit mass murder in one of our malls first?

A Teenage Black Mob Gang Rape And The Media Is Silent?