You Know the Obamacare Waivers are Imaginary and Illegal, Right?

In my previous article, I made the point that the President of the United States has zero authority to change the law. Only Congress has any authority to make or change any law. While it is technically possible for the President to direct his Justice Department to not enforce the law (clearly wrong, if not unconstitutional) by dint of his power over the Executive Branch, and to therefore, take the heat, it is not possible for the President to take the rap for directing citizens to break the law. 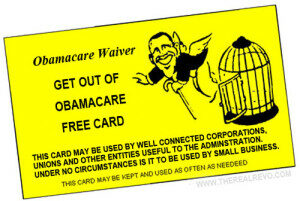 If the President tells any citizen (or business) that they are exempt from following any particular law, the President is aiding and abetting a crime. In fact, he is a conspirator.

It is the same as if I, without authority, gave you an exemption or waiver from, let’s say, wearing seat belts. Hearing this, you go driving, you get pulled over, and you try to tell the nice policeman that I, without authority, gave you the right to drive without seat belts. What do you think will happen? If you’re not taken away for 24-hour observation, you will get a ticket. I will suffer no consequence at all. I, having no authority, am not responsible for your actions.

Has anybody anywhere discussed possible consequences against those who would invoke imaginary waivers and exemptions? Saying “The President told me I don’t have to participate” is not an excuse. Any judge worth his salt will be legally bound to rule that such waivers and exemptions, not being statutory, not written in the law, have no force of law. Can you imagine the chaos when the first person or business sued for not participating with the ACA-Obamacare invokes a waiver or exemption, only to find it imaginary and without force of law?

Now, we must ask, why aren’t our Congressmen making this case? Why are even those in the Tea Party ignoring this important point?