Kansas Secretary of State Kris Kobach has responded to Eric Holder and he is not backing down. Kobach warned, in a statement released Thursday, “With respect to any litigation, we will happily meet Mr. Holder in court.”

For the State of Kansas to pass the strongest 2nd Amendment legislation in the nation made my heart swell with American pride and their rejection of Mr. Eric Holder yesterday made me even prouder. I was born in Kansas and will die a “Jayhawk.”

For those who don’t know… The Jayhawkers were “Free Staters” during the American Civil War. They would go into Missouri and “steal” slaves in order to ensure their God-given right to freedom. And so it is today. The proud people of Kansas value freedom that is a God-given right and they will not be intimidated by the likes of Attorney General Holder.

Last week Eric Holder sent a letter to Governor Sam Brownback informing the Governor that Kansas S.B. 102, The Second Amendment Protection Act, was unconstitutional. Here is a brief quote from the letter:

“In purporting to override federal law and to criminalize the official acts of federal officers, S.B. 102 directly conflicts with federal law and is therefore unconstitutional.”

Kris W. Kobach, Kansas Secretary of State, was quick to respond. Here is an excerpt from his official statement:

“On April 26, 2013, U.S. Attorney General Eric Holder sent a letter to Kansas Governor Brownback concerning SB 102, the Second Amendment Protection Act. In that letter, Holder declares SB 102 to be unconstitutional and suggests that federal officials will disregard it. Holder’s understanding of the United States Constitution is incorrect.

As one of the co-authors of SB 102 and a former professor of constitutional law, I ensured that it was drafted to withstand any legal challenge. SB 102 states that a firearm that is assembled in Kansas, that is stamped “Made in Kansas,” and that never leaves the State of Kansas is not subject to regulation by the federal government. It was drafted with the intent to assert Kansas’s authority as a co-equal sovereign under the United States Constitution to regulate a matter that is outside Congress’s jurisdiction under the Interstate Commerce Clause of Article I, Section 8. It was also drafted to stave off unconstitutional legislation pending in Congress that not only infringes upon the Second Amendment rights of Kansas Citizens, but also exceeds Congress’s constitutional power to regulate interstate commerce.”

I am attaching a copy of both letters at the end of the article for those who would like to read them in full. Eric Holder was just taken to school by a real constitutional scholar. The legislators in Kansas have shored up every loophole and this legislation should be a model for other states to follow.

Make no mistake Mr. Holder. If you send your people to Kansas in pursuit of any kind of unconstitutional gun grab they can and will be arrested. This is the law. You do not write laws in the State of Kansas.

This is not New York or California Mr. Holder. This is Kansas.

In Kansas we still cling to our God and our guns.

Jayhawks stand for freedom and will not back down at any cost. The stakes are too high. 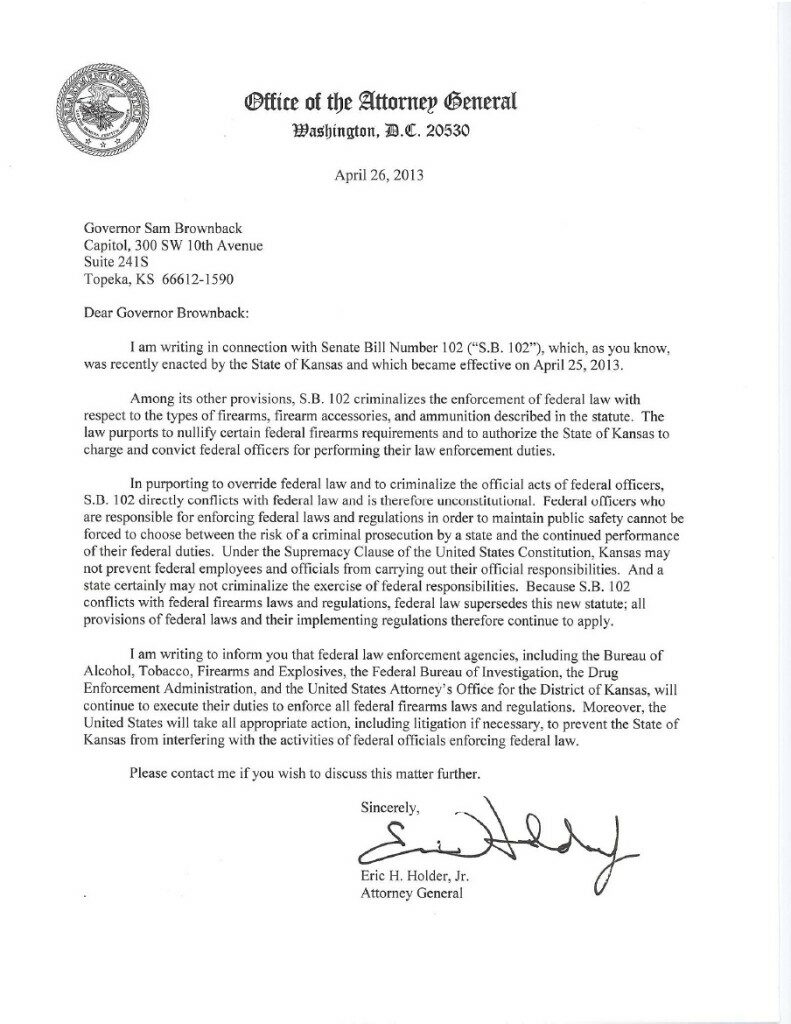 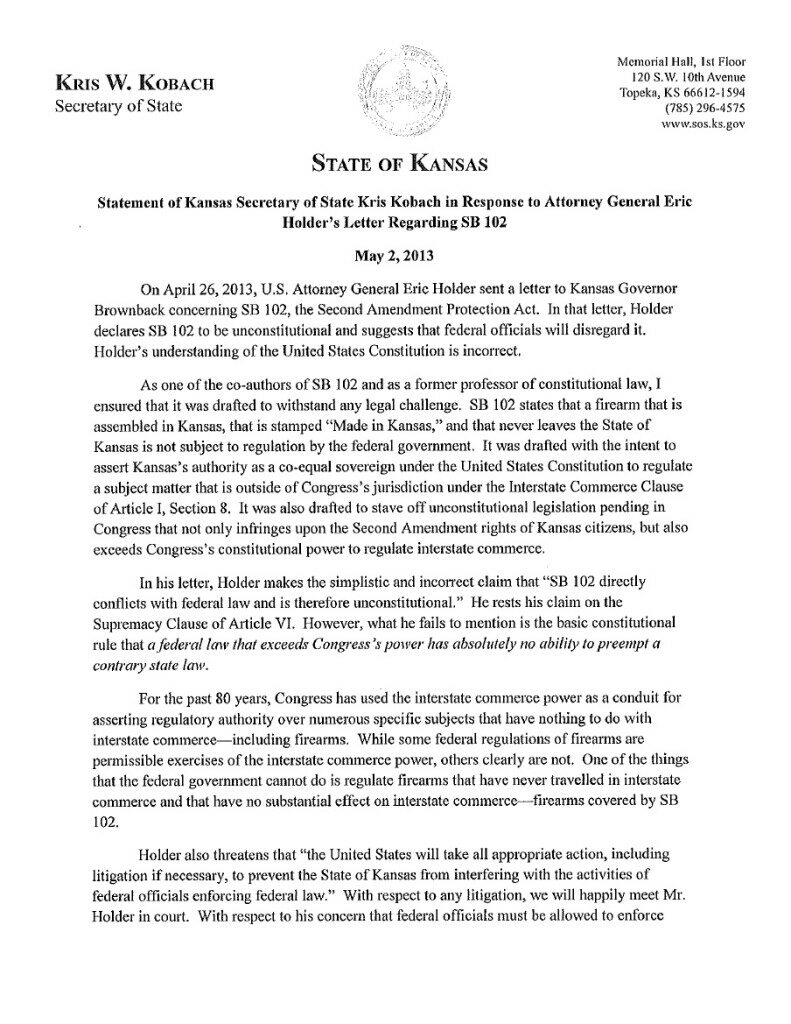 The White Board Doesn't Address the Real Fiscal Problem

The White Board Doesn't Address the Real Fiscal Problem